Wabasso's water tower, painted in the school colors and adorned with a white rabbit, the school mascot.

Does Minnesota exist west of Mankato?

Of course it does.

But I’ve noticed through the years that lots of southeastern Minnesotans think the state’s western border ends in Blue Earth County. Heck, a lot of metro residents think there’s nothing outside of “the Cities,” except Duluth and Brainerd and maybe St. Cloud and Rochester.

So when I tell folks I grew up on a farm outside of Vesta and graduated from Wabasso High School, I typically get a blank stare, a questioning look, a “where’s that?”

I then follow up with my own question: “Do you know where Redwood Falls is? Marshall? Vesta is along highway 19 half-way between the two towns.”

If that explanation still doesn’t work, I say, “southwestern Minnesota.”

Yes, I’m proud of my home area, where I traveled this past weekend for my 35-year Wabasso High School class reunion. WHS is in Wabasso, a town of 650 in the heart of Redwood County and a 20-mile bus ride from my childhood home.

Wabasso—home of the rabbits, the white rabbits. Please don’t laugh.

Through the years, we Wabasso students took our share of ribbing about the school mascot. I mean, compared to Wildcats and Tigers and Falcons, a lowly rabbit fails to evoke any image of strength or fierceness.

But there’s a reason behind the mascot. And it is found in the translation of Wabasso, a Native American word for “white rabbit.”

Henry Wadsworth Longfellow even wrote about Wabasso (not the town) in his epic poem, The Song of Hiawatha, which is based on native stories and legends.

“But the fierce Kabibonokka
Had his dwelling among icebergs,
In the everlasting snow-drifts,
In the kingdom of Wabasso,
In the land of the White Rabbit.”

Longfellow got it right on the “everlasting snow-drifts,” which, in the winter, spread like a vast sea of sculpted waves across the flat prairie.

As for a white rabbit… There’s a giant replica along State Highway 68 in Wabasso. That’s in southwestern Minnesota. You know, west of Mankato. 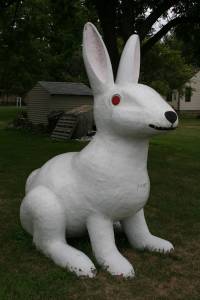