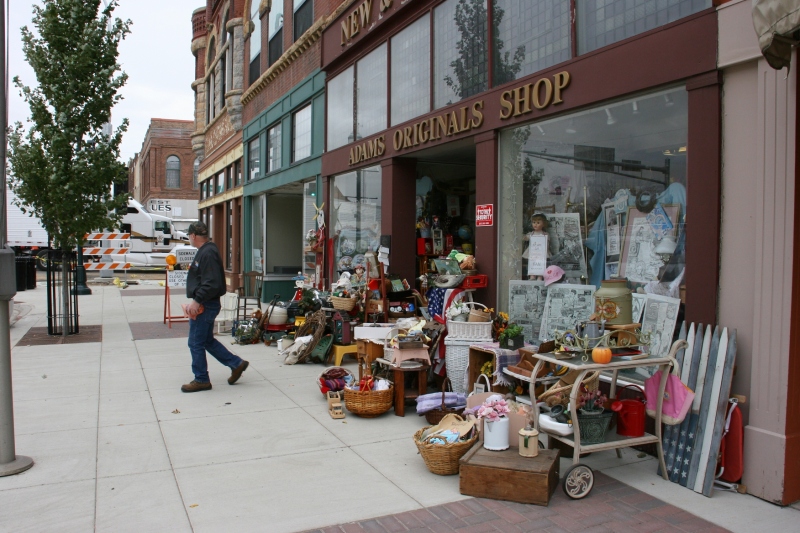 THE CLUTTERED EXTERIOR tipped me off to what I would find inside Adams Originals Shop. Yet, I was not prepared. Not prepared for the mounds of merchandise heaped into this narrow building in historic downtown Albert Lea. 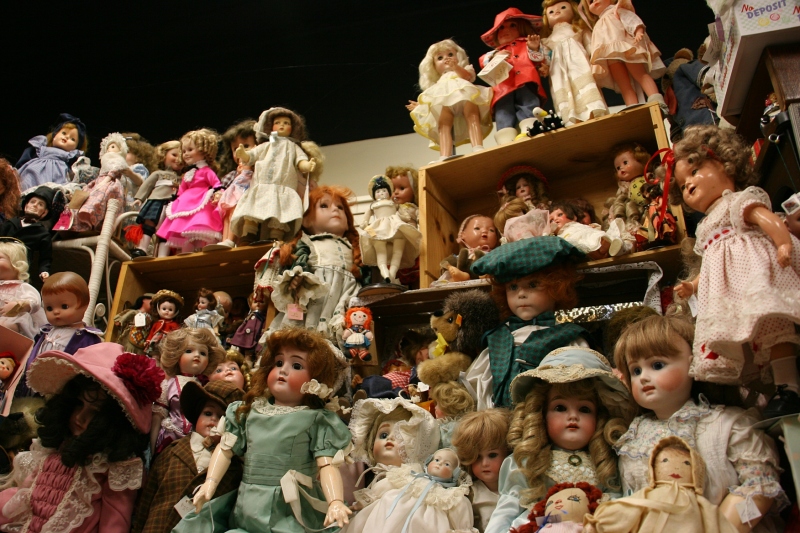 Adams Originals rates as truly original. I’ve never seen a store like it with thousands of dolls and other items crammed onto shelves, set on the floor and piled into every conceivable space. 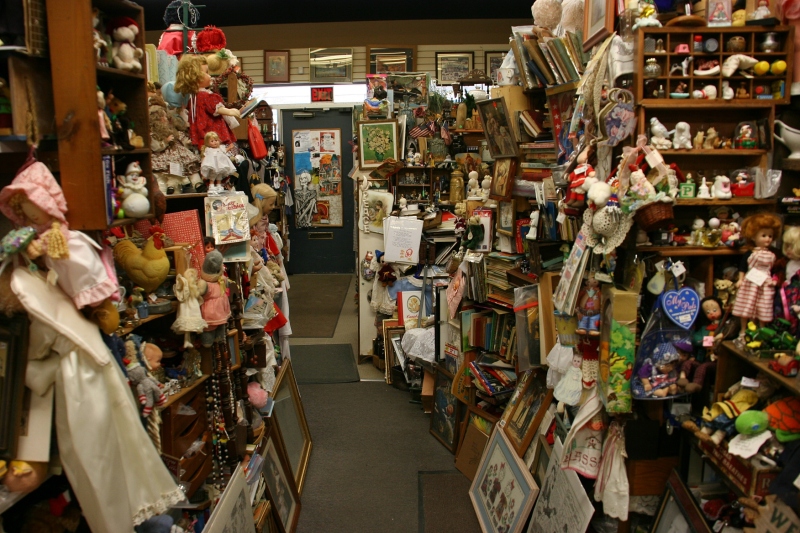 Just inside the shop and looking toward the front door.

Inside, I simply stood for a minute taking it all in, overwhelmed by the sheer volume of goods displayed along both sides of a single narrow aisle branching into nooks of merchandise. 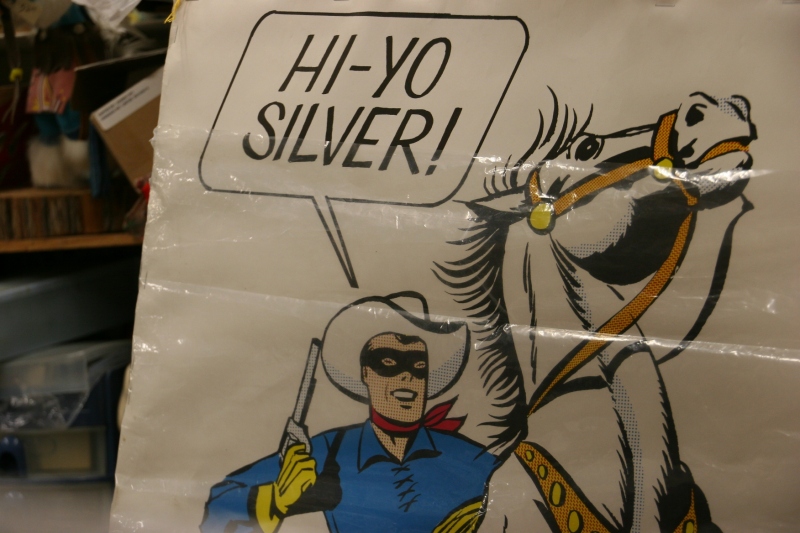 A Lone Ranger poster for sale. 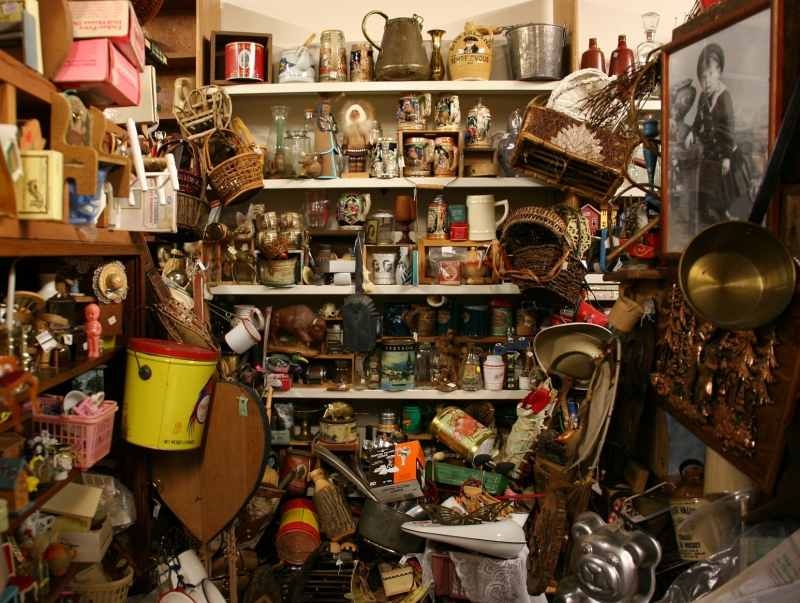 Much more than dolls pack this shop. 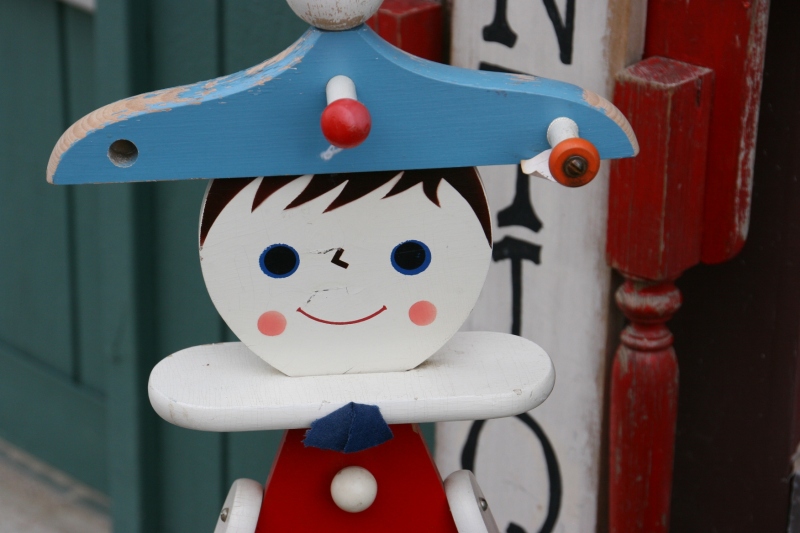 A piece of merchandise showcased outside the store.

You can’t meet another customer in here without sidling sideways. Even on a blustery Monday morning, shoppers stopped by to peruse the goods offered by Eloise and Jack Adams. 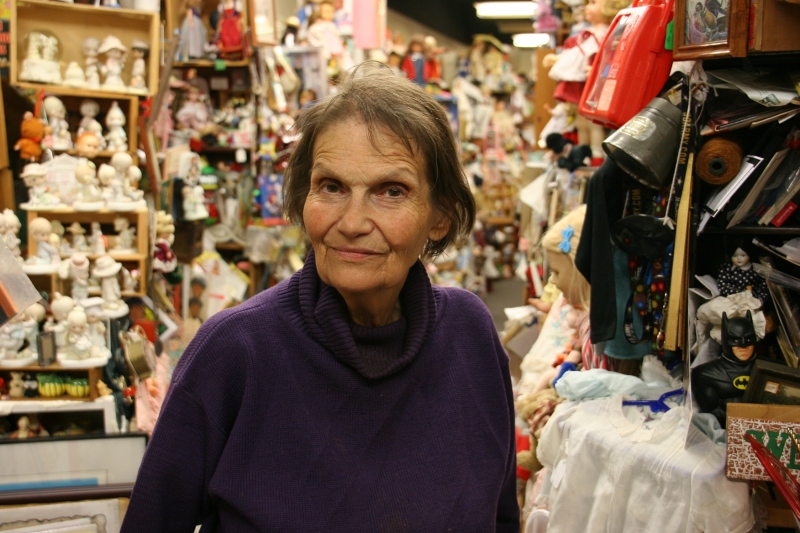 That’s Eloise, pronounced Eloyce, as in rhyming with Joyce. Eloise doesn’t correct mispronunciations of her name; it happens all too often. It doesn’t seem to bother her. She’s just honored that her dad named her and with the uncommon pronunciation he chose. 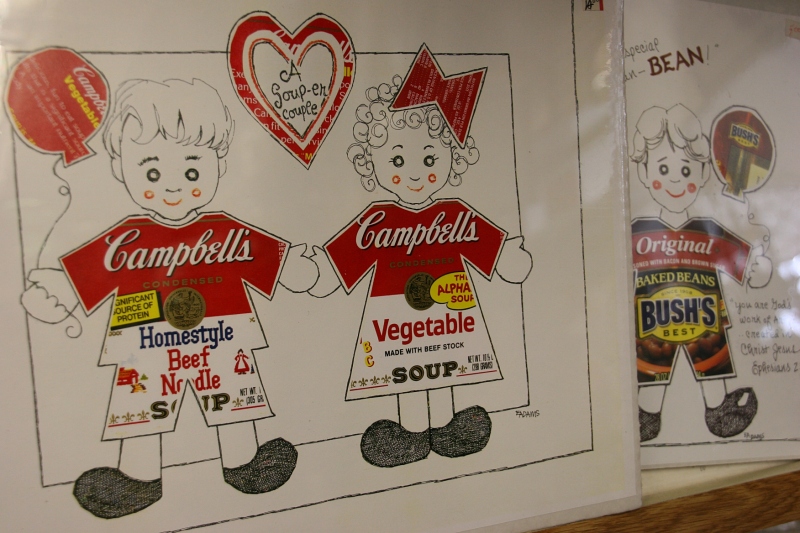 An example of the art Eloise creates with labels. 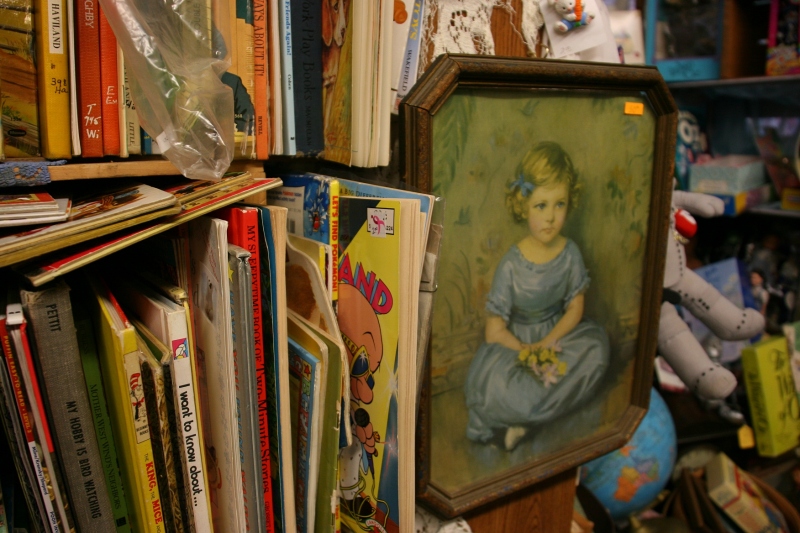 Eloise pulled this portrait off the hook so she could read the note about the date it was gifted to someone. I don’t recall details. But I do remember how Eloise lovingly noted the girl’s beautiful blue eyes accented by her blue dress.

In short, Eloise is passionate about life and people and celebrating each day. She didn’t tell me that. She didn’t need to. It shows. 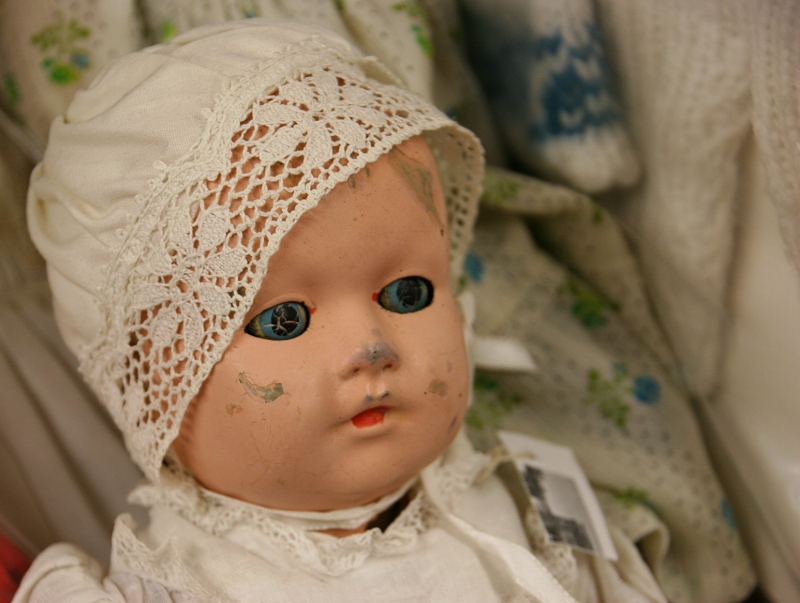 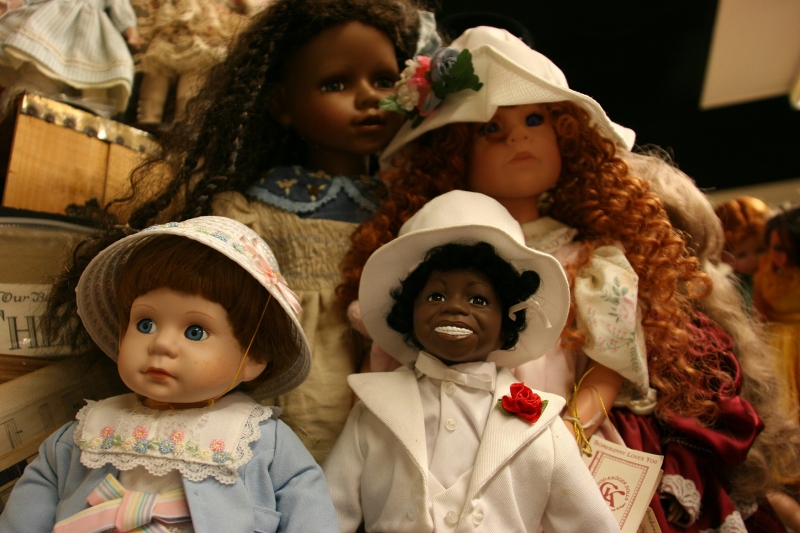 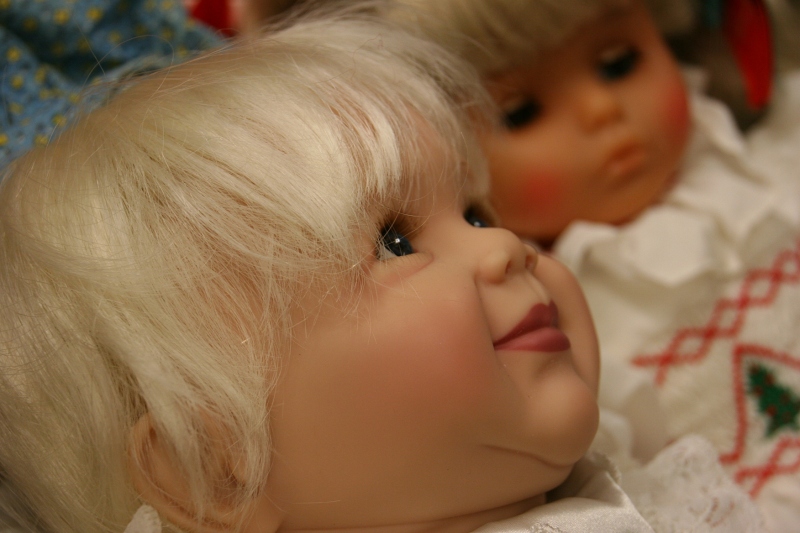 When I asked Eloise about her favorite doll, she politely refused to name one. That would be, she said, like asking her to choose which of her six children is her favorite. It can’t be done. 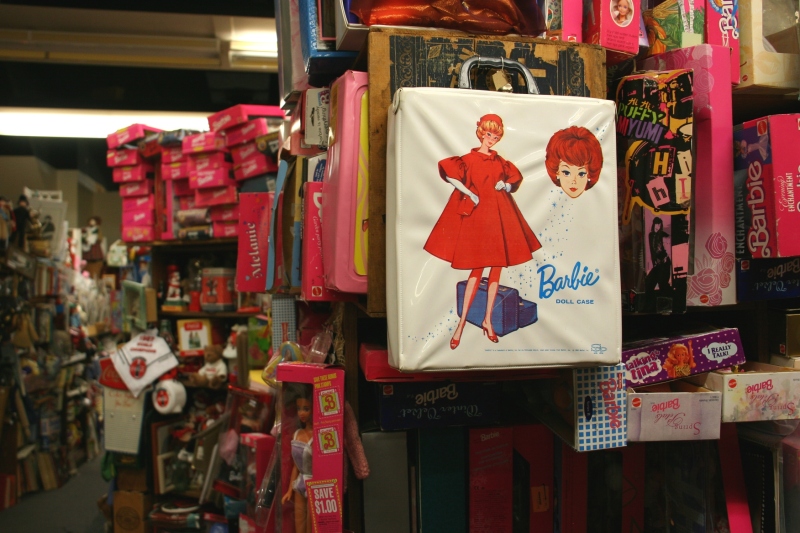 There’s a whole section of Barbie dolls and Barbie stuff.

Elvis has not left the building. 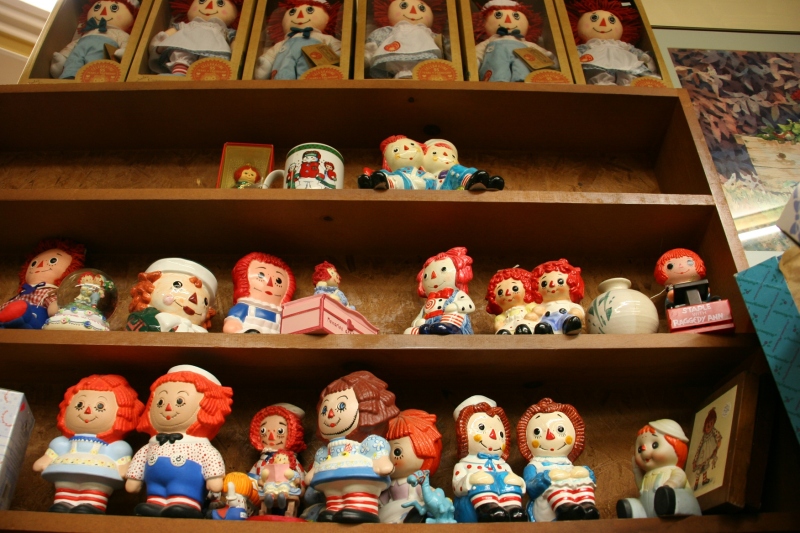 But she’ll share, when asked, how this whole doll collecting thing started. A friend collected dolls and, she said, you can’t hang around too long with a doll collector without getting hooked yourself. The dolls belonging to that friend, who died of cancer, are now housed in the Freeborn County Historical Society Museum after being showcased downtown for many years. 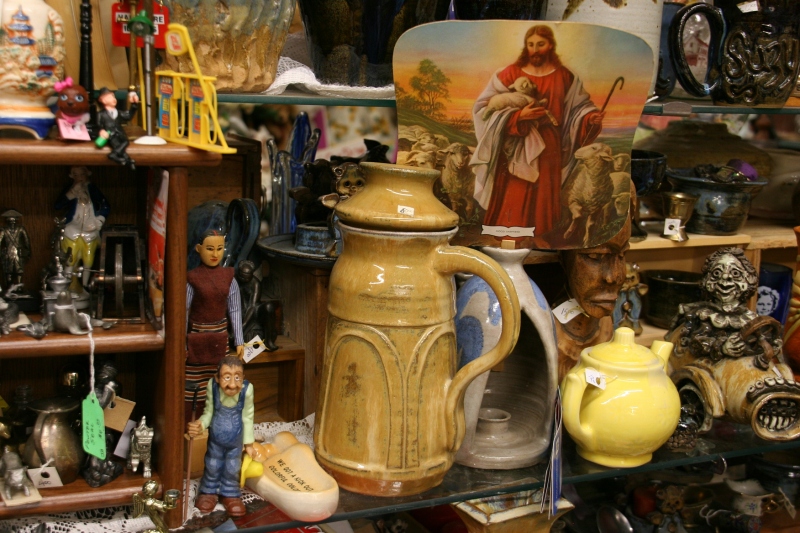 An example of Adams pottery, center, sits among other merchandise.

Although dolls dominate Adams Originals, this shop isn’t solely about dolls. Eloyce and her husband are also artists who produce stoneware pottery, much of it for churches. Chalices. That sort of functional pottery. But there’s decorative pottery, too, like sculpted lions or a dragon, made years ago for a dragon-loving son. Eloise noted that Jack’s shoulders are wearing out, curbing pottery throwing. 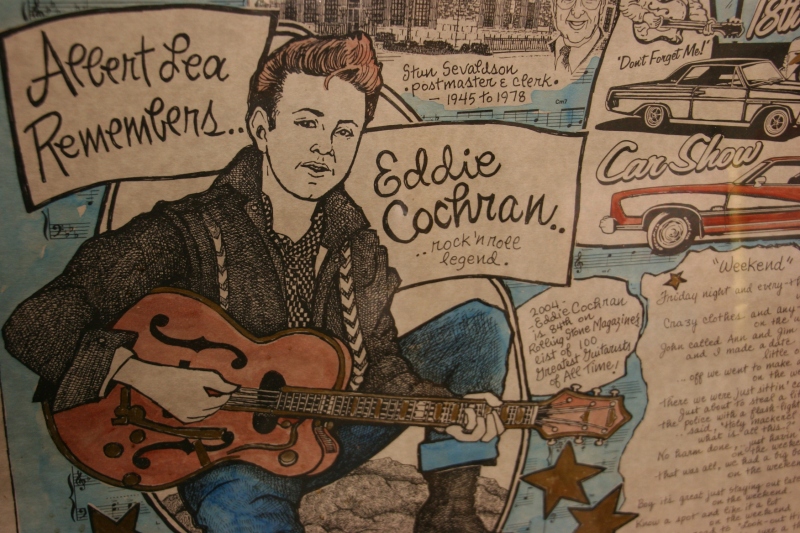 Pressing Eloise, I learn that she is a Minnesota State University Mankato art major. Prints of her pen and ink art are scattered throughout her shop. She designs art for local celebrations like Big Island Rendezvous and Eddie Cochran Days and will custom create pieces for individual customers. 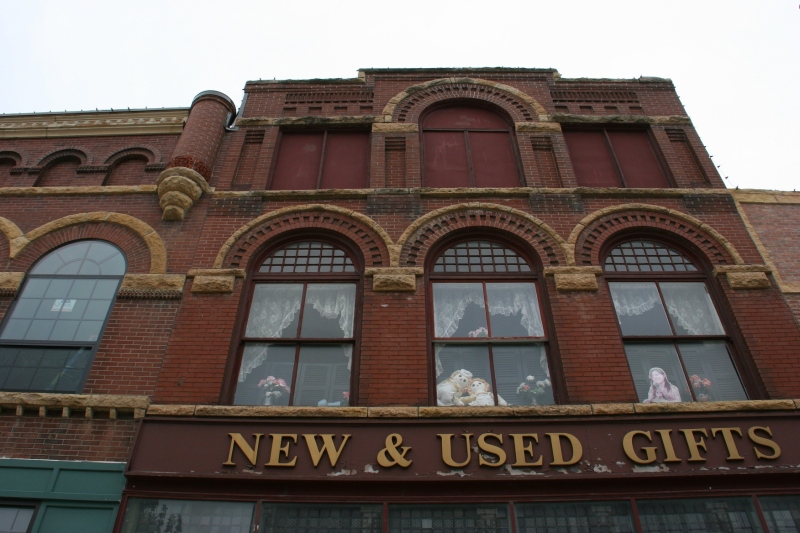 Second floor windows hint at what’s inside the shop.

Her work is exquisitely detailed. And, Eloise noted, she drew the building that now houses Adams Originals when it was still a bookstore. On the bookstore’s last day, she and Jack stopped by to thank the booksellers for being part of the Albert Lea business community. They learned then that a purchase agreement fell through. The couple needed more space for their business which had outgrown their home. So they bought the booksellers’ building.

Today, at nearly eighty years old, Eloise has no plans to retire. Why? She loves what she does. And that’s a good enough reason to stay in business.

Check back tomorrow to read the third installment in this series from Albert Lea. Click here to read my introductory post.