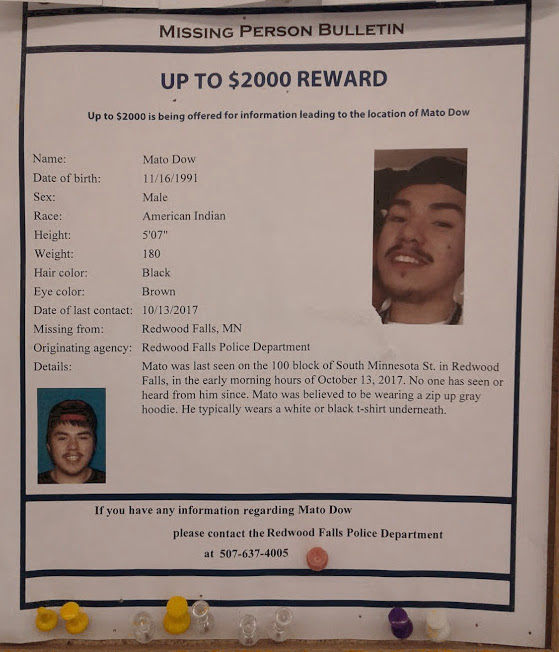 DURING A RECENT RESTROOM stop at a Redwood Falls convenience store, I paused to read notices tacked onto a bulletin board. There I saw a missing persons bulletin for Mato Dow. The 26-year-old was last seen in the early morning hours of October 13, 2017, in this southwestern Minnesota community. A quick online search showed he remains missing. (Correct me if I’m wrong.)

That led me to wonder how many other Minnesotans are missing. The number shocked me. Eight-three. That’s according to information published on the Minnesota Department of Public Safety website. In the Minnesota Missing and Unidentified Persons Clearinghouse section, the missing are snapshot profiled via photos, places and dates of disappearances, and current ages. (Click on individual names for more details.) Dow, for whatever reason, is not among those listed.

But familiar names from high profile missing persons cases are on that list. Cases I remember.

The body of Jacob Wetterling, Minnesota’s most high profile missing person, was found in September 2016, his killer then apprehended and imprisoned. Jacob’s case did much to raise awareness. I am thankful the Wetterling family finally got answers about their son. I only wish the results had been different.

But for 83 other missing persons, family and friends still don’t have those answers. That includes the oldest case listed, that of brothers Daniel, David and Kenneth Klein. The three left their home on November 10, 1951, for Fairview Park in Minneapolis, never to be seen again. Can you imagine? I can’t. Those “boys” would now be in their seventies.

From every corner of Minnesota—from Worthington to Winona to Warren to Chisholm and places in between—people have vanished. Disappeared. Gone. The list also includes several gone missing in other states.

To not know what happened to your loved one has to be the most unimaginable pain. I’d encourage you to take the time today to click here and scroll through those 83 missing persons profiles. Even if you live outside Minnesota. All it takes is one person somewhere to share information that could help solve a case and provide answers for loved ones.