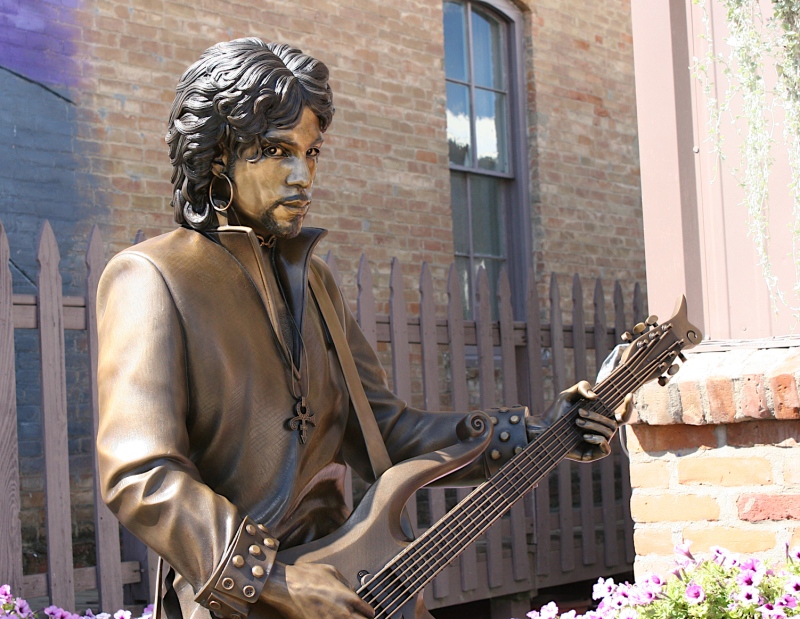 This bronze statue of Prince, crafted by Brodin Studios in Kimball, Minnesota, focuses a Prince Memorial Garden in Henderson, Minnesota.

MY CONNECTION TO THE MUSICIAN Prince, of Purple Rain fame, stretches back to my stint as a news reporter for the Owatonna People’s Press. The girlfriend of my then co-worker Roy was an extra in the movie. In a crowd scene, probably, although I’m uncertain. I don’t recall her name, but she was a quiet and beautiful young woman with hair the color of corn silk. 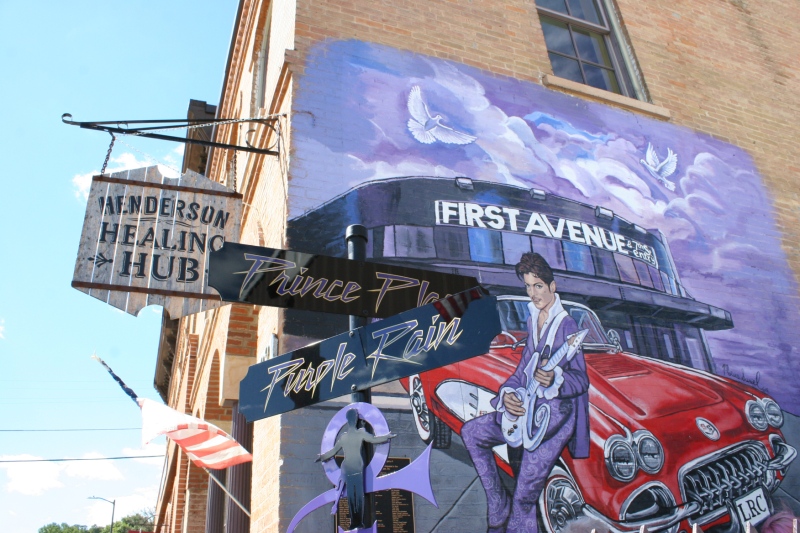 The mural (painted by Moises Suriel) and a memorial bench were the first installations in 2018 with the statue added recently. Donations from fans primarily funded the project.

Fast forward to 36 years after the release of that 1984 movie and I found myself in Henderson, where a memorable scene from the movie was filmed on the banks of the Minnesota River. I’ve not seen the movie nor am I familiar with Prince’s music, other than “Purple Rain.” Still, I recognize his value as a musician and his worldwide popularity. He’s an important part of Minnesota’s performing arts history and a draw for those who are fans. 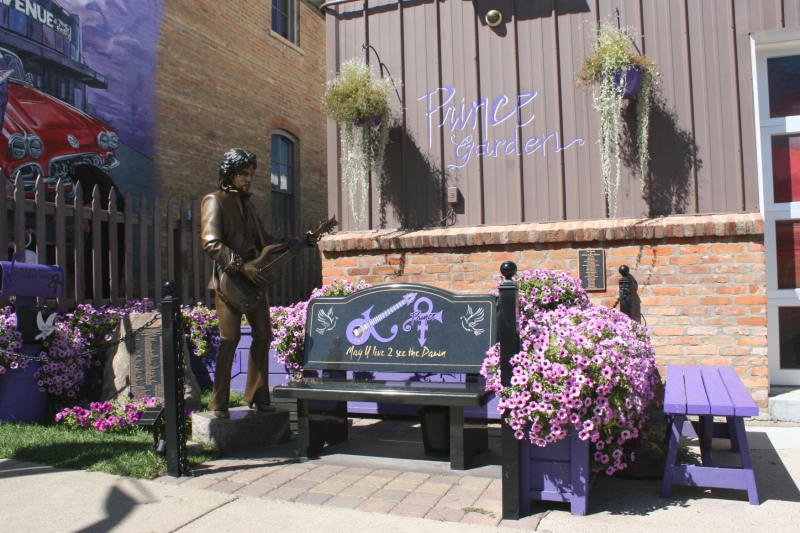 An overview of the Prince Park in downtown Henderson, located at 522 Main Street/Minnesota State Highway 19 and next to the busy Henderson RoadHaus, a bar, restaurant and event center (and popular with bikers).

For those reasons, I wanted to photograph the latest tribute to Prince, a lovely pocket park in the heart of historic downtown Henderson. The park focal point is a life-size bronze statue of Prince set against a backdrop mural. Purple petunias, purple benches, even a purple mailbox (with guestbook inside) frame the garden honoring Prince Rogers Nelson. 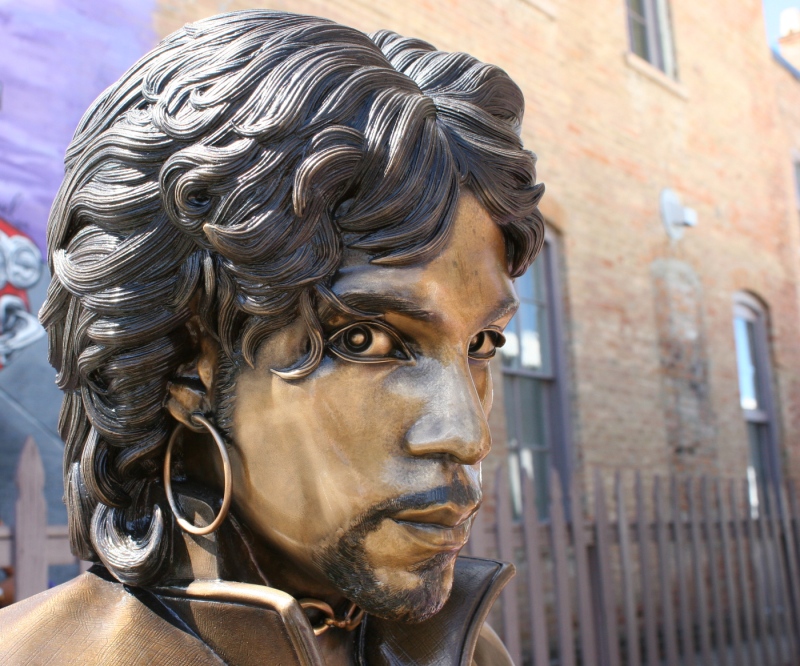 Up close with Prince, in bronze.

On the Saturday afternoon I visited, Joel King, president of Prince Legacy Henderson Project Inc., presided at the site, purple folding chair open on the sidewalk next to his vehicle. He worked as a cameraman for Graffiti Bridge (the sequel to Purple Rain), has a long credit history in filming and now lives in Henderson. He introduced himself as the man behind the Prince memorial and offered plenty of advice on photographing it. Ever the cameraman. 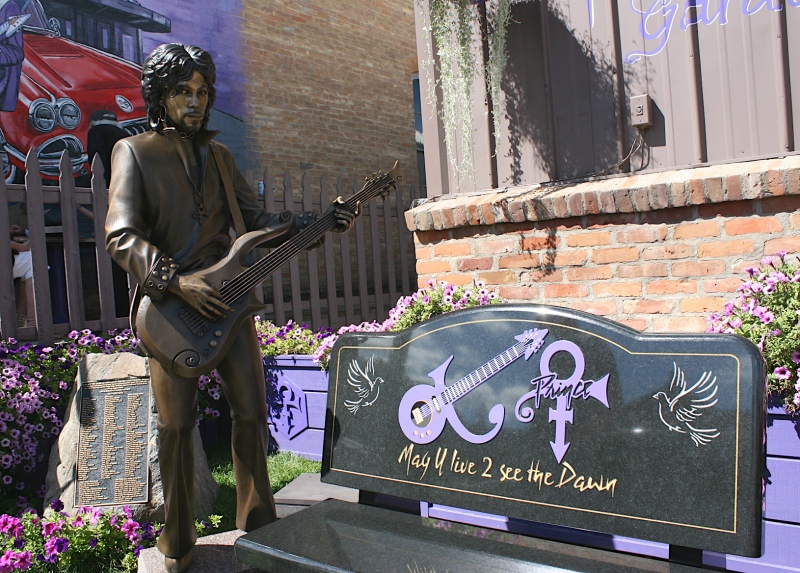 Another look at the Prince memorial.

I got a few photos; not as many as I wanted. I decided I would do better to return on a day when no one is around, when I can take my time photographing this homegrown Prince Garden, when Henderson isn’t teeming with people…

This billboard stands along the northbound lane of Interstate 35 in Faribault, which is about an hour from Henderson. Paisley Park is only a 40-minute drive from Henderson.

FYI: This Friday, September 4, The Relief Sessions Summer Concert Series in Burnsville honors Prince during a “Celebrating the Music of Prince! LIVE!” session from 7:30-8:45 pm by Chase & Ovation. The group bills itself as presenting the “World’s Premier Prince Tribute Show.”

TELL ME: Have you heard Chase & Ovation or seen the Prince park in Henderson or toured Prince’s home and studio at Paisley Park?