Go ahead, laugh at this Trans-Siberian Orchestra story December 12, 2012

MY HUSBAND PHONED from work one morning last week to tell me he’d just won two tickets from a local radio station to see the Trans-Siberian Orchestra in concert at the Xcel Energy Center in St. Paul.

I was thrilled. I love classical music and have never attended a professional orchestra concert. 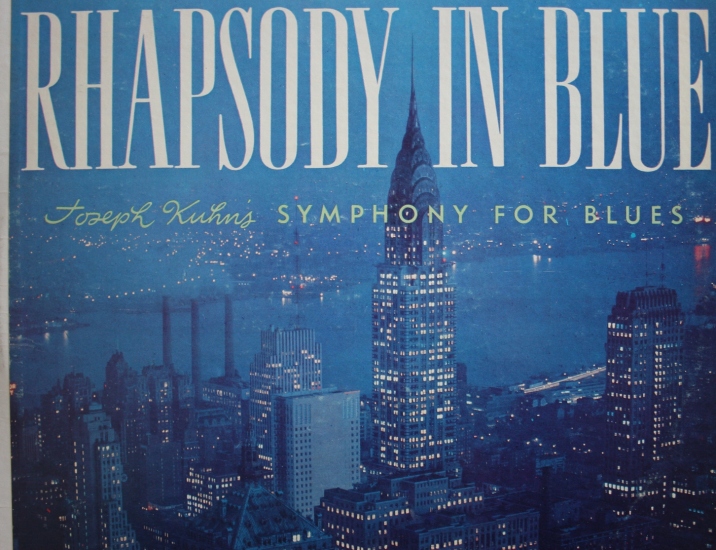 This album cover has nothing to do with the Trans-Siberian Orchestra except the location, New York City. Joe Krush created this cover photo for Joseph Kuhn’s 1958 “Symphony for Blues” record album cover. I recently purchased 10 vintage records, including this one, at the Faribault Salvation Army for the cover art. If I own a record player, I’m not sure where it’s stored or if it works.

“Are they were from Siberia?” I asked, noting the orchestra name.

It didn’t matter. I was excited about the upcoming concert. Since Randy needed to get back to work, I didn’t ask for additional details.

Later, I shared the news with our oldest daughter. The conversation went something like this:

Daughter: You do know that the Trans-Siberian Orchestra is a rock band, right?

Me: Uh, no. I thought it was a classical orchestra. Oh, oh. Maybe now I don’t want to go.

And that is how I learned that my husband and I, who last took in a rock concert (by The Moody Blues) at the St. Paul Civic Center decades ago before children, would not be hearing the lovely and soothing classical music I imagined.

Instead, we’ll be bombarded by steel guitars, so I’m told by someone who’s twice heard the Trans-Siberian Orchestra in concert. The few token string instruments in the band are, he claims, barely audible above the rest of the instruments. Still, he says, we’ll see and hear an outstanding performance which also includes pyrotechnics.

The Trans-Siberian Orchestra Christmas concert includes a touch of Broadway. Again, unrelated except for the Broadway element, here’s another vintage record album I recently purchased for the graphic arts element.

The band’s 2012 holiday tour marks the debut performance of their rock opera, “The Lost Christmas Eve,” fusing elements of rock, classical, folk, Broadway and R & B music. I doubt Randy is aware of the “opera” tag.

The performance tells a story that “encompasses a run-down hotel, an old toy store, a blues bar, a Gothic cathedral and their respective inhabitants all intertwined during a single enchanted Christmas Eve in New York City.”

Cool. I appreciate a good story, even if this one’s not set in a quaint Siberian village.

Even the actual albums themselves are a beauty to behold, including this one featuring Wayne King and his orchestra. I bet the Trans-Siberian Orchestra sounds nothing like King.

FOR ANY OF YOU who may be wondering, yes, my spouse was fully aware that the Trans-Siberian Orchestra is a rock band. Hey, I’ve never claimed to know much about music.

Have any of you attended this band’s holiday show? If so, should I bring ear plugs and what’s your review of the performance?