TWENTY-FOUR HOURS HAVE PASSED since the deed was done. Correction. Deeds. Plural.

The covert operation began, as all such operations do, with a plan.

Piling up the hearts in anticipation of Operation Heart Attack.

Days before the staging, my husband and I (mostly me) traced and cut hearts from construction paper. Red hearts, pink, yellow, blue, purple, orange… The color didn’t matter as much as the quantity.

All told, there were about 70 hearts in three sizes—half destined for each home.

Then the search was on for stakes to which the paper hearts would be secured. The original intent was to purchase wooden skewers. But since this isn’t exactly grilling season in Minnesota, none were to be found. 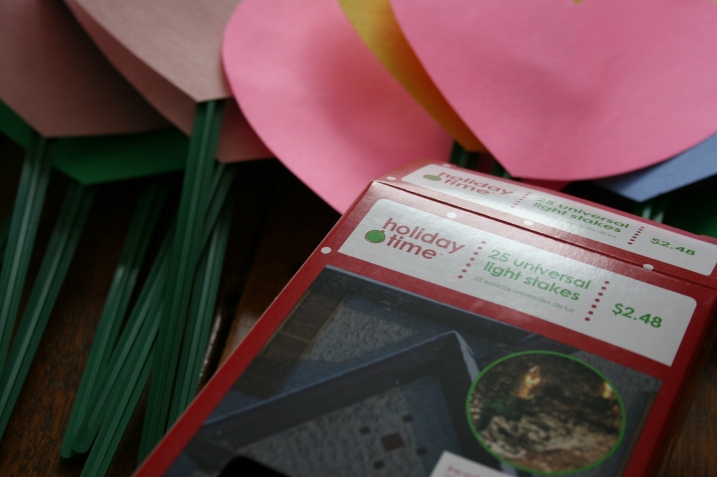 That left us wandering the aisles of Walmart, where I happened upon universal light stakes on the clearance shelves. These 9-inch long plastic sticks, typically used to secure Christmas lights in the ground, were on sale for the bargain price of 10 cents for a box of 25. I snatched three.

Each paper heart was secured to a plastic stake with regular tape.

But would tape adhere and stick in Minnesota’s brutal temps? We tested regular tape, packaging tape and masking tape and rated the everyday tape as the best option. And so stakes were taped to hearts.

On the morning of February 13, the day of Operation Heart Attack, I divided the hearts into two piles and later stashed them in canvas tote bags.

That evening, around 7, Randy and I set out to place the hearts in the front yards of our friends. We knew we had to work quickly and quietly in the cold and darkness of a Minnesota winter evening.

The plan was to park around the corner from the targeted homes. There was no need for such stealth at Billie Jo and Neal’s, though, as their house was dark. So Randy stopped the car right in front of their place along a quiet residential street. 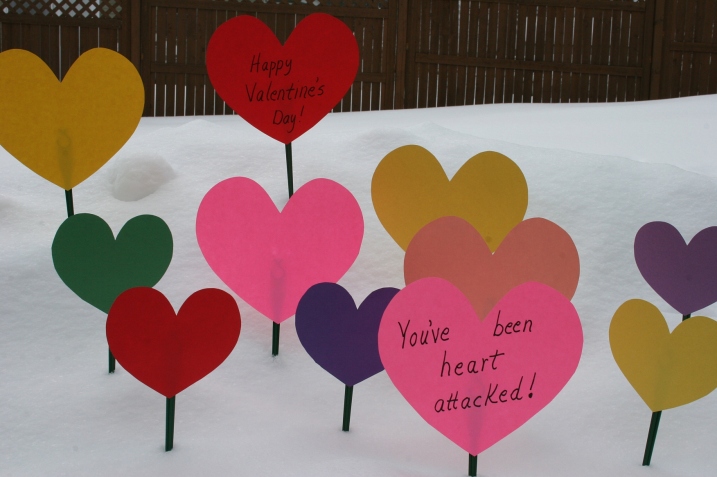 A day-time test run in my backyard as, obviously, I could not photograph the evening heart attack in progress.

We hustled out and then begin stabbing the stakes into the snow banked along the edge of their driveway. We had not anticipated rock hard snow. But we managed and in less than five minutes were out of there, contemplating when our friends and their two elementary-aged children would discover they’d been heart attacked.

Then on to the next house, where we did have to park around the corner and use extreme stealth. Our friends Tammy and Jesse had an exterior light switched on and their living room curtains partially open. They also have a dog. We thought for certain that we would be caught by them or one of their four children as we, once again, jabbed stakes into hard-packed snow.

However, we made a clean get-away.

Some creative mind (not mine) came up with the “You’ve been heart attacked!” idea.

Early Friday morning Tammy emailed: “I was wondering if we have you and Randy to thank for the heart attack in our yard?”

Seems Tammy and Jesse’s daughter, Hannah, discovered the clutch of hearts within a half hour of their placement when she let the family dog outside. Violet set up quite a racket barking at the fluttering hearts. Apparently she didn’t bark, though, when we were executing Operation Heart Attack. Good doggie.

Ruling each other out, they eventually settled on Randy and me as the likely suspects.

Says Tammy after my confession, “…the kids couldn’t wait until morning so they could get a better look at it. Everyone has been smiling all morning. How very thoughtful of you.”

Imagine three times this number of hearts placed in our friends’ front yards.

Both families have since pulled up the hearts we left and heart attacked others.

Billie Jo, along with her daughter and son, passed the joy along to a classmate of Nevaeh. While my friends were driving home, Nevaeh told her mom, “…wouldn’t it be cool if they did it to someone else then it got all the way around the world. Then Audrey could get famous just by doing one little thing.”

I cannot claim credit for the Operation Heart Attack idea. I saw this online. But I will accept the grateful thanks of my friends for making their Valentine’s Day a memorable one.

As Billie Jo says, “I never knew I would be so thankful for a heart attack!”

And Tammy claimed she and her kids had a blast sneaking out to a place in the country and passing the hearts on to mutual friends of ours.

Oh, the joy in something as simple as a heart attack.

35 Responses to “You’ve been “heart attacked!””