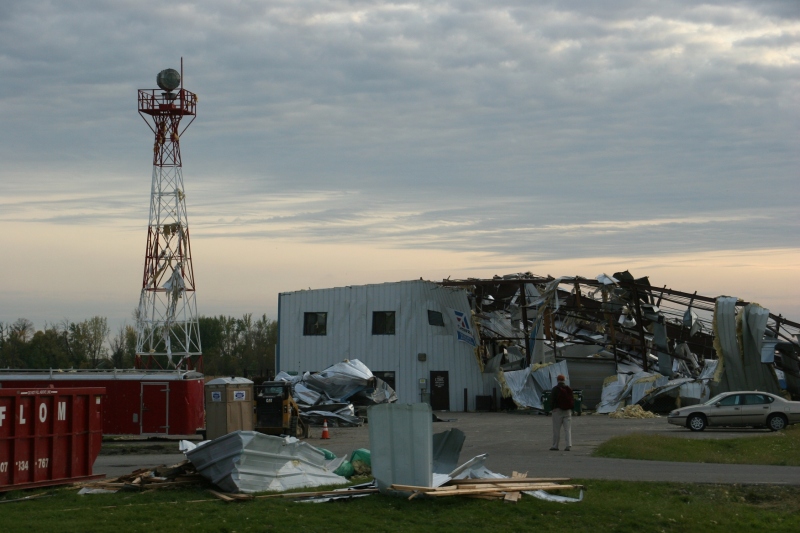 Ten days after an EF2 tornado hit the Faribault Airport, a man surveys the damage just before sunset.

MAKE THAT SIXTEEN. The National Weather Service updated from 10 to 16 the number of tornadoes which touched down in southern Minnesota and western Wisconsin on September 20. 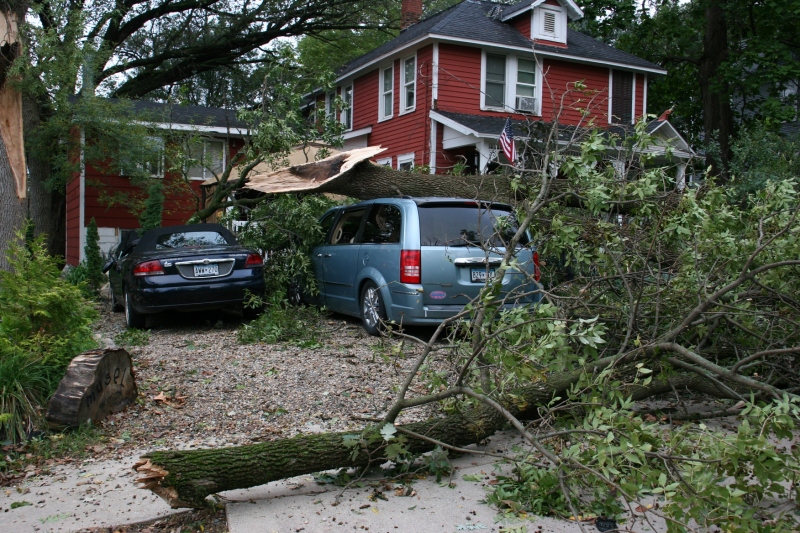 A half block from my home trees fell onto two vehicles. Minnesota Prairie Roots file photo.

The unprecedented massive storm system hit my area hardest with five confirmed tornadoes in Rice County, the strongest an EF2 with wind speeds of 120 – 130 mph, according to the NWS report. That tornado damaged homes in Morristown and along Roberds Lake and destroyed the Faribault airport. Within the city of Faribault, apparent straight line winds felled hundreds of trees, including in my neighborhood, and also damaged houses and other structures. The tornadoes continued north and east of Faribault into Wisconsin causing additional damage. 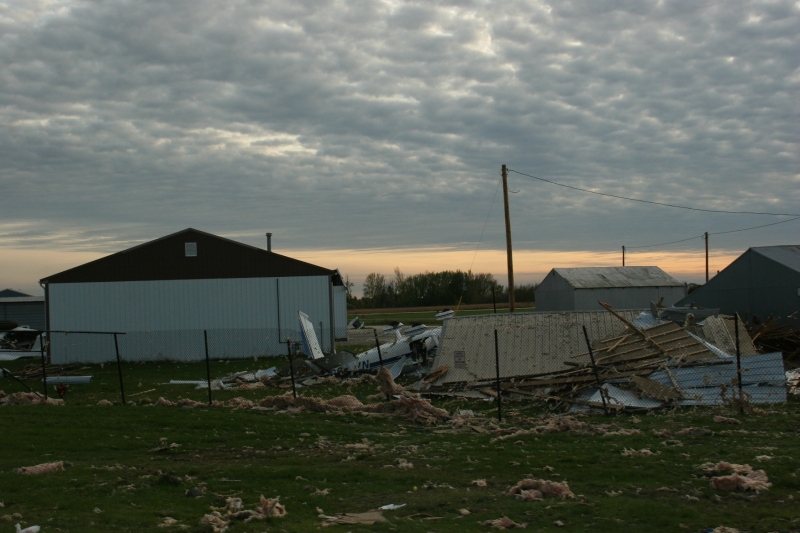 The Weather Service states in its report that assessments continue and the final tornado count could change. 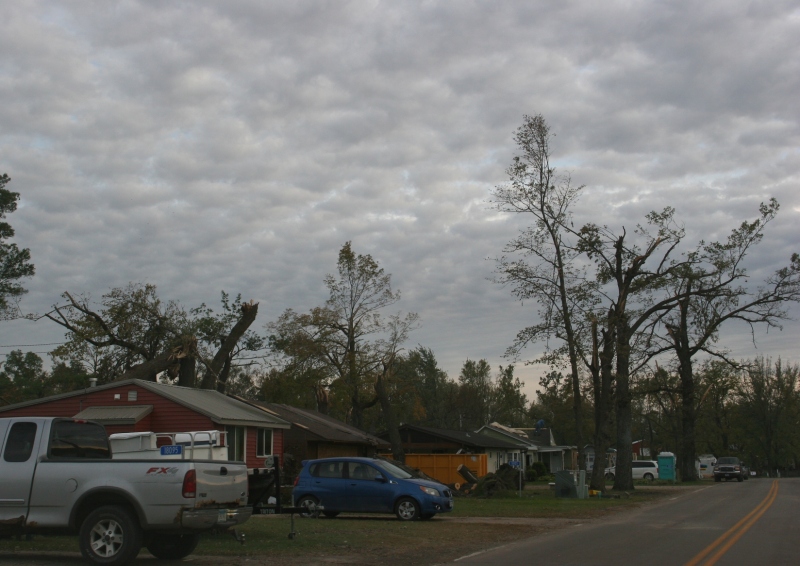 The single photo I shot along Roberds Lake Boulevard on Sunday evening, 10 days after the tornado. Damage to homes and loss of trees along this section of Roberds Lake is extensive.

Sunday evening, 10 days after the storm, Randy and I drove through the countryside, past the airport and along a short section of Roberds Lake Boulevard. Up until then, we chose to stay away as advised by local authorities. Gawkers early on hampered the work of emergency personnel, utility workers and clean-up crews. After seeing too many gawkers in our neighborhood (including the evening of the storm), I decided to wait until things calmed to view the destruction. No need to get in the way. 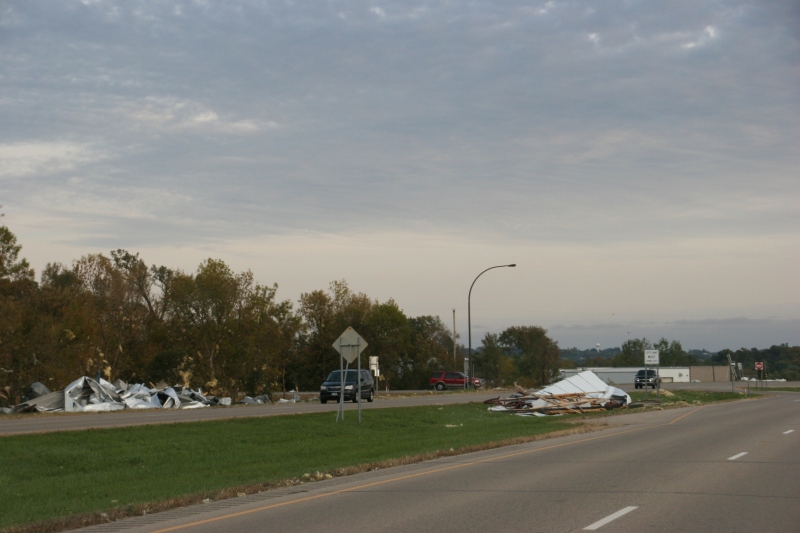 Debris landed on and along Minnesota State Highway 21 by the Faribault Airport. This is right off Interstate 35. I expect the scene was much worse right after the tornado. I shot this 10 days after the storm and shortly before sunset.

Ten days out, plenty of people are still working hard to remove trees, clear properties and repair storm-damaged buildings. Many roofs remain partially covered with tarps. I didn’t take many photos, except of the airport damage, and that as we drove past the airport. Mostly metal debris still lines road ditches and the median along Minnesota State Highway 21. I can only imagine how bad this area looked right after the tornado because it still looks bad. 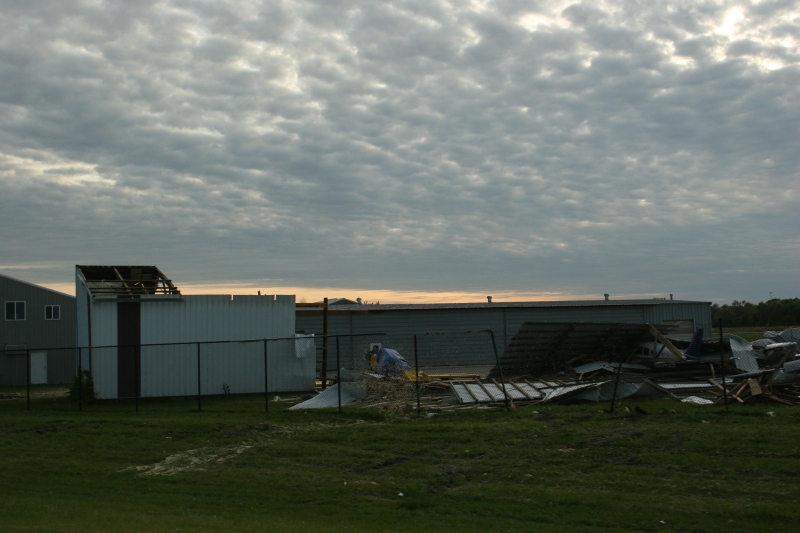 Look closely and you will see aircraft under the debris.

Yet, in all of this we find reason to remain thankful. Not a single person was killed, which is remarkable given the 16 tornadoes and straight line winds. The NWS credits a Wireless Emergency Alert notification of the approaching tornadoes for saving lives. I agree. I got that alert on my cell phone. But I’d also seen an alert on TV and heard an alert on the local radio station to seek immediate shelter. I take these warnings seriously. There was a reason alerts sounded and emergency sirens blared, here in Faribault off and on for 40 minutes. They save lives. To ignore those warnings is a risk I will never take. Ever.