I expect the view from my front window to look like this by this afternoon. Minnesota Prairie Roots file photo 2014.

WE ARE ONLY HOURS AWAY here in southeastern Minnesota from a major winter storm expected to drop up to a foot of snow on some parts of our state. In my city of Faribault in Rice County, predictions range from five to nine inches.

No matter how you measure it, it’s still snow that will cause travel problems and which needs to be removed. Oh, joy.

This photograph, taken along Minnesota Highway 30 in southwestern Minnesota, shows how the wind drives snow across and onto roadways. Minnesota Prairie Roots file photo January 2010.

But it’s not just the snow that will create issues. It’s the strong wind accompanying the snow. Winds tomorrow in the southwestern part of the state, my home area, could reach 50 mph. Thus the blizzard warning starting at midnight in that region.

While in southwestern Minnesota last weekend, I noticed snow already banking in drifts along drainage ditches, here east of Morgan.

I’ve experienced enough winter storms on the prairie to appreciate the seriousness of a blizzard. Reduced visibility creates white-out conditions. Snowdrifts block roads. And those powerful winds plunge the “feels like” temperature into the deadly range when exposed to the elements.

Along Minnesota State Highway 19 on the west edge of Redwood Falls, a sign advises motorists to check travel information.

Still, winter storm after winter storm, people fail to heed the dangers. In and post storm, the media reports vehicles stranded along roadways (mostly interstates) and motorists rescued. I’ve heard of drivers taking back county roads after GPS directed them there because the interstate was closed. Interstate closure is a pretty clear indication that no one should be on the road. 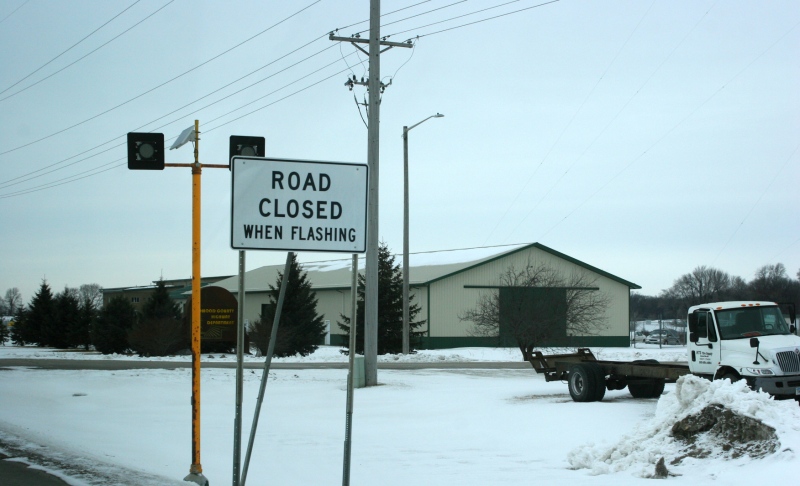 I expect lights on this sign to flash today and tomorrow, closing Minnesota State Highway 19 west of Redwood Falls.

Along certain sections of interstate and highways, snow gates are closed to block the roadway when travel becomes difficult, if not impossible. Just last week when traveling through Redwood Falls, I noticed signage indicating Minnesota State Highway 19 is closed when the yellow light on the sign flashes. A second sign advised motorists to check state travel conditions on MN511.org. While I appreciate that Minnesota Department of Transportation tool, I’ve often found it’s not updated enough.

The bottom line is this, though: Common sense should tell us to stay off the roads during a winter storm like the one barreling into Minnesota and elsewhere today. That said, I’ve advised the husband to leave work early for his commute home from Northfield, a 22-minute drive on a typical, non-storm day.

For those of you in the path of the winter storm, stay safe.

20 Responses to “Waiting for the winter storm”