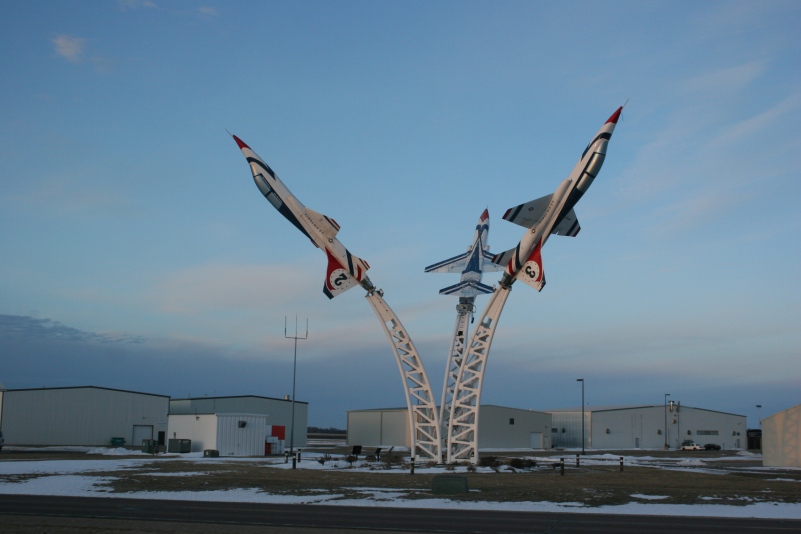 SOME MEMORIES REMAIN, decades after the event, forever seared into our minds. But often they stay in the subconscious, surfacing only when triggered by something heard, seen, smelled, tasted, thought.

I hadn’t thought in a long time about the plane. Until I researched the story behind an airplane sculpture at The Owatonna Degner Regional Airport. I photographed the trio of T-38 Talon Thunderbirds while passing by on Interstate 35 as day broke on a recent Sunday morning.

My mind didn’t shift then to the afternoon decades ago when a fighter jet roared over my childhood farm outside Vesta in Redwood County in southwestern Minnesota. Rather, my thoughts focused on my mom. We were en route to visit her at a care center in Belview.

But now, weeks later, I sorted through photos taken on that 2.5-hour drive and remembered a summer afternoon in the 1960s. I was outside when the fighter jet flew low and fast over the farmyard, causing me to dive under the B Farmall tractor and the cattle to escape their fence. The sight and sound of that plane terrified me. We seldom saw planes, mostly just the trails of invisible or barely visible slivers of silver jets.

To this day, I don’t know from whence that mystery plane came or why the pilot chose to fly at such a low altitude. I can only speculate that he was on a training mission. And why not conduct that in a sparsely-populated area? Never mind the people or livestock.

That experience resurfaced as I sought out info about the three fighter jets artfully positioned at the Owatonna airport. Initially, they stood outside nearby Heritage Halls Museum, now closed. Museum founder and local businessman and pilot, R.W. “Buzz” Kaplan, led efforts to bring the retired U.S. Air Force jets to the area. Eventually the planes would land permanently at the airport, highly-visible to those traveling along the interstate.

Kaplan, on June 26, 2002, died at this very airport after the plane he was piloting, a replica WW I JN-4D “Jenny” biplane, crashed shortly after take-off. This airport has been the site of several fatal crashes, including one in 2008 which claimed eight lives. I hadn’t thought about that crash either, one of the worst in Minnesota, in a long time.

It’s interesting how the split-second decision to photograph a sculpture of three fighter jets along an interstate can trigger-roll into more than simply an image.

Life is that way. Memories, rising in unexpected moments, connecting to today.

TELL ME: Do you have a long ago memory that sometimes surfaces? I’d like to hear your stories and why that memory remains and others don’t.

17 Responses to “Memory in flight”