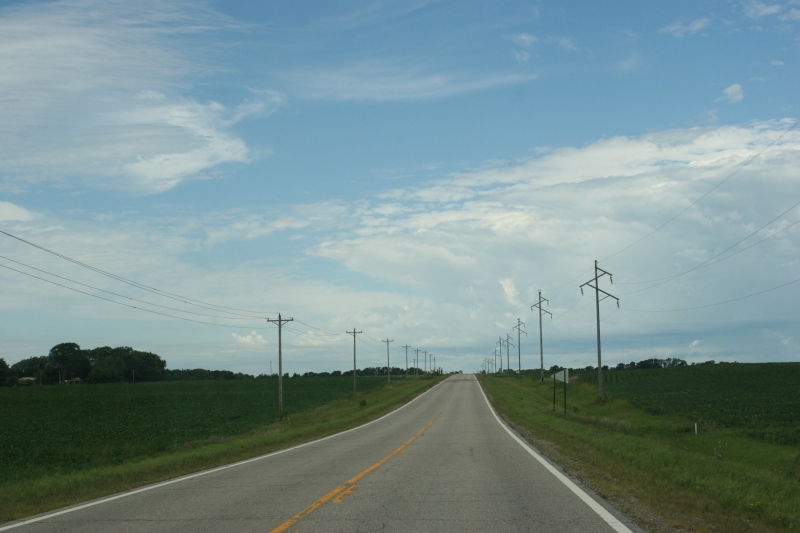 On the backroads in Rice County, heading northwest of Faribault.

IN MINNESOTA, WE LOVE our summers. And that has a lot to do with our long winter season of too much cold, too much darkness and too much being cooped up inside. Factor in COVID-19, and summer days are even more beloved.

This summer, especially, Randy and I often pack sandwiches, fruit and whatever else for a weekend picnic lunch. It gets us out of the house/town and into nature, exactly what we need when so few options exist for escaping anywhere these days.

On a recent Sunday we contemplated our choices and decided to head to Cannon Falls, a lovely river town about a 40-minute drive northeast of Faribault. But, as we backed out of the driveway and looked to the east, we saw storm clouds building. Change of plans.

One of my favorite rural sightings: aged barns. This one is near Circle Lake.

Instead, we drove northwest, with the intention of picnicking at Circle Lake near Millersburg. A much shorter drive on a day of unsettled weather and possible afternoon storms. As farm-raised kids, Randy and I always delight in traveling rural roads—paved and gravel—to reach our destination. On our way to the lake, I observed acres and acres of cornfields, far exceeding soybeans. Not uncommon. 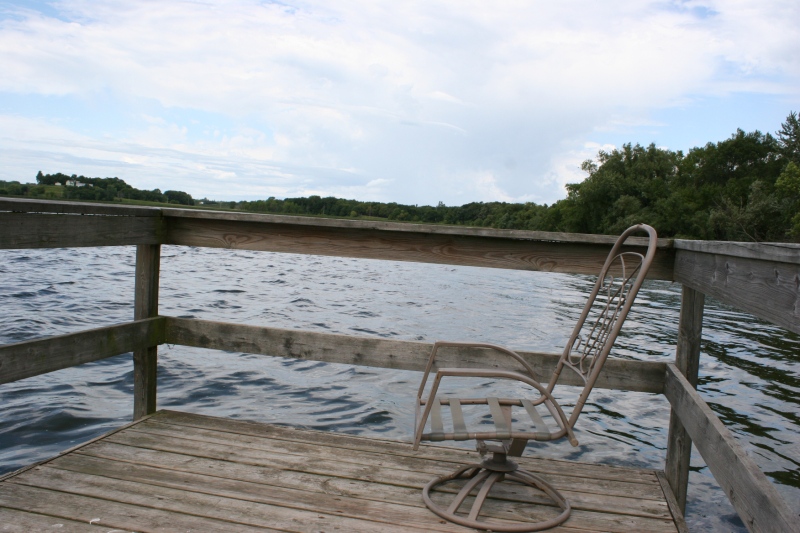 No comfortable place to sit here… 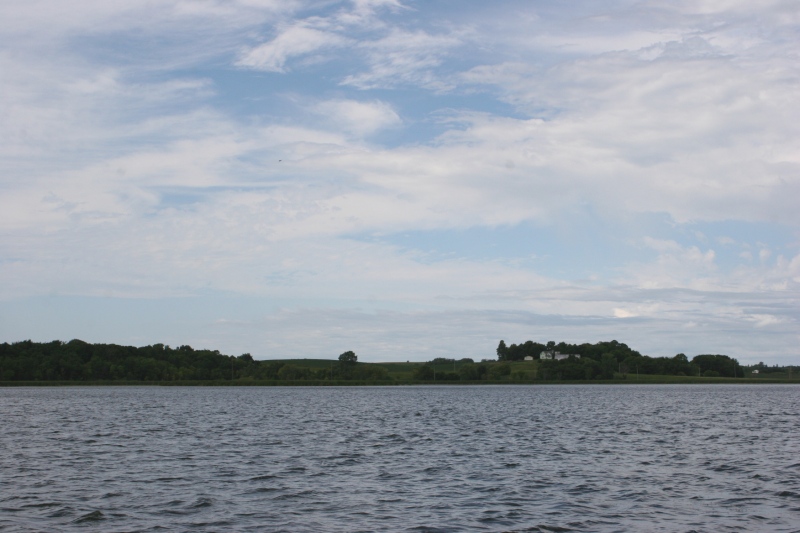 A view across the lake of the surrounding countryside.

Randy missed the lake turn, backed up on the county road and then proceeded down a gravel road toward the public access point on Circle Lake. To our dismay, we saw no picnic tables either at the boat launch site or the adjoining patch of green space. A bit farther, though, we spotted a public fishing pier and decided to eat our lunch there.

Christdala Swedish Lutheran Church, rural Millersburg. This congregation is no longer active with the church open only for special services and events.

Except, upon exiting the van, the stench and sight of stagnant green lake water, a floating dead fish and an obviously neglected dock caused us to, once again, change plans. I suggested we drive to Christdala Swedish Lutheran Church, a nearby historic church set atop a hill overlooking the countryside. We could, I suggested, sit and eat on the front steps.

A long flight of steps lead up to Christdala.

And that’s exactly what we did, after we climbed a flight of steep steps and passed under an arch leading into the fenced church property. We turned our backs to the sun, settled onto the cement steps and pulled our sandwiches and other food from the cooler. It’s the first time I’ve picnicked next to a graveyard.

Near Minnie’s gravestone, I photographed this interesting fungi on a stump.

As we ate, we talked. About Minnie’s gravestone, in our direct line of vision. She died at age 23. Like too many who lost their lives prematurely so long ago, pre-modern medicine. 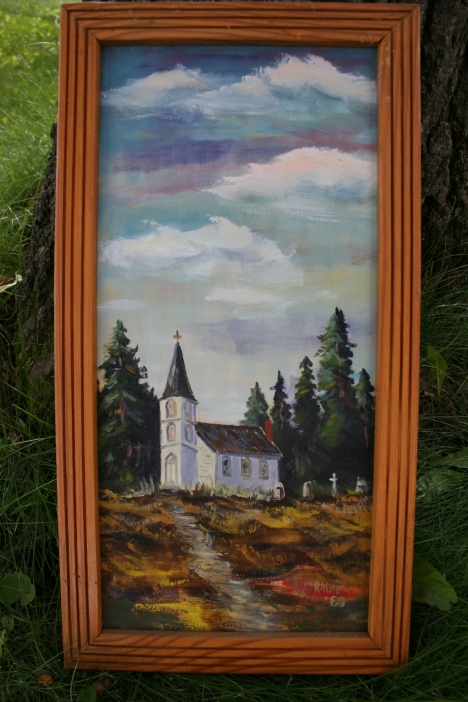 We talked about our friend Rhody Yule, who showed select original religious-themed paintings here in September 2010. He gifted his 1969 painting of Christdala to the church on that Sunday afternoon. I organized the outdoor exhibit and a more extensive gallery show months later at the Paradise Center for the Arts in Faribault. Randy and I shared how much we liked Rhody, an artist we met while on a Sunday afternoon drive two years prior. He quickly became a good friend, someone we delighted in for his gentle spirit of kindness and deep faith. A true joy.

Posted next to the front door.

The steeple rises high above the treetops.

A summary of church history is posted next to the parking area at the bottom of the hill.

We noticed paint scrapings on the ground, indicating the 1877 church was recently repainted. It’s on the National Register of Historic Places, significant because the first Swedish settlers in Rice County founded this congregation, built this church.

One of those immigrants, Nicolaus Gustafson, was fatally shot by Cole Younger in the attempted raid of the first National Bank in nearby Northfield in 1876.

Just a sampling of the Swedish names on gravestones at Christdala.

There’s so much history and heritage here in names like Johnson, Anderson, Paulson, Gustafson, Nelson…the “son” of Swedish ancestry.

I spotted this probably glow-in-the-dark cross near a gravesite.

We meandered through the graveyard separately. I didn’t recall the wrought iron fencing or the graveyard expansion with plenty of open space for future burials. It’s a lovely and peaceful spot behind the church, away from busy enough Rice County Road 1.

Randy saw this snake before me, but didn’t tell me. He knows I intensely dislike snakes. He suggested I move in for a closer photo. Nope, won’t get any nearer.

Randy directed me to a small stone marking the additional graveyard space as a 2008 donation from Arnold and Phyllis Horejsi. Arnold, 91, died on March 23 with services delayed until August 18 and burial at Christdala at a later date. I walked over to the marker, commenting on the many small holes that pock the land. And then, as I focused my camera lens on the stone, I noticed the garter snake. Striped. Too long. Head up. Tongue flicking.

That was it. I was done touring this cemetery, especially after I saw a second snake nearby. My mind fixated on snakes slithering over my feet and I couldn’t help but think of the biblical reference in Genesis to Satan as a snake. I wanted out, away, gone.

A heavenward view of Christdala.

And so I waited near the front steps for Randy to finish his graveyard tour. I aimed my camera lens skyward, away from the ground and slithering snakes. High toward the steeple. To the cross.