MY EAST COAST COLLEGE son enthuses about mass transit, specifically about the T in Boston. It’s his go-to form of transportation if he’s not walking or unicycling.

The lack of wide-spread mass transit in Minnesota frustrates him. As I see it, cars, cost, lower population, and a much larger geographical area all factor into less public transportation availability here than out East.

I’ve reminded him that many a compact East Coast state would fit inside Minnesota’s borders. We don’t have nearly as many people living here as there. 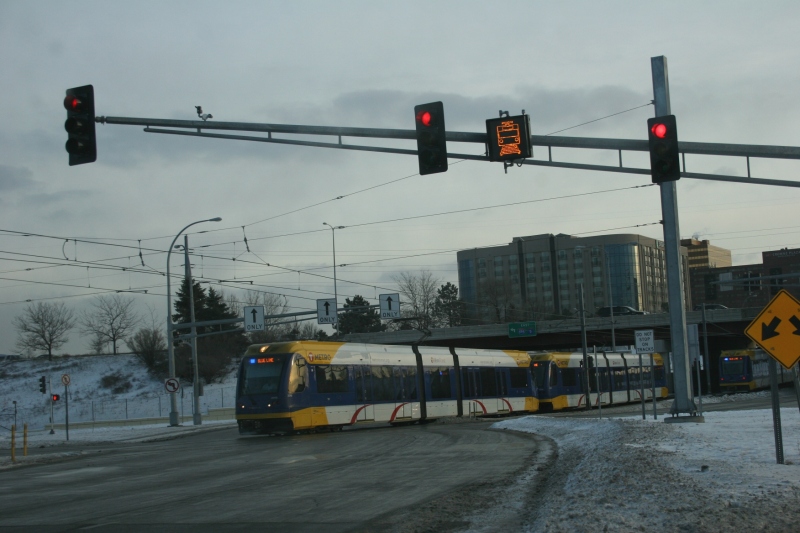 The light rail heads toward the Minneapolis-St. Paul International Airport.

To be fair, mass transit exists in Minnesota’s larger communities and cities with bus service and, in the Twin Cities metro, light rail. And even in rural areas, limited bus service is available in some counties.

Decades ago, when I visited my Aunt Rae and Uncle Bob each summer, riding the Greyhound bus solo from my Uncle Harold’s gas station along Highway 19 in Vesta in southwestern Minnesota all the way to downtown Minneapolis, I experienced big city mass transit.

An excited nervousness jittered through me as Rae and I boarded a Minneapolis city bus to wherever she wanted to take me. To the Munsingwear warehouse to sort through piles of fabric. Or maybe downtown to view an art exhibit. Specific destination details mostly elude me now all these decades later.

But the wonderment of wheeling along narrow city streets, the bus pulsating to a stop, door swishing open, passengers boarding, remains with me. To be young and in the big city hustle far from corn and soybean fields and bellowing cows opened my eyes.

I saw beyond rural. I saw the possibilities. Another life. Another world.

Not that I ever fell in love with the big city. But riding the bus through Minneapolis sparked something inside me. A yearning for art galleries and music and museums and architecture. A library. An appreciation for people who didn’t look like the German Lutherans and Catholics back home. An almost dizzying awareness of noise and lights and motion. And tall buildings.

Vehicle traffic and light rail meet at this oddly configured and confusing intersection near the Minneapolis-St. Paul International Airport.

I wonder if, today, a young girl from outstate Minnesota boards the Metro Blue Line (light rail) with her parents, perhaps headed to Target Field for a Twins game or to the Mall of America, and feels the same thrill I experienced decades ago riding the bus through the streets of Minneapolis.

Does she imagine the possibilities, study the faces, note the traffic, delight in her destination, desire to explore more of the city? Or is she overwhelmed by it all, wishing only to leave?

FYI: The Minnesota Department of Transportation has a statewide rail plan for an inter-city passenger rail line running from the metro to my community of Faribault and perhaps farther south. This proposal is in the early discussion stages. Click here to learn more.