The story behind naming a winter storm Linus February 3, 2015

AS ANOTHER MAJOR WINTER STORM raged across the country this past weekend through Monday, I wondered why these storms are now being named. And why Linus?

So I turned to the internet.

Apparently The Weather Channel has taken to naming these storms in an effort to better communicate storm information in a cohesive way.

If you’re like me and most Americans, you automatically think Linus, as in the security blanket dragging Peanuts character created by cartoonist Charles Schulz.

You would be wrong.

The Weather Channel is referencing Greek mythology and Apollo’s son, Linus. Some sources say he was killed by dogs as a child. Other sources say Linus, a great musician, was murdered by his father.

The online Mythology Dictionary defines Linus as a “song of lamentation.” That would seem more appropriate given many a winter storm weary American is likely lamenting yet more snow to remove and cause travel difficulties.

Those official explanations aside, Linus, the Peanuts character, seems to be holding this storm as tight as a security blanket.

So I’m going to take that blanket and run with it.

Did you know that Linus is named after Sleepy Eye, Minnesota, native Linus Maurer, a friend of Charles Schulz? The two met while teaching at Art Instruction Schools, Inc. Schulz originally became connected with the school when he took correspondence courses there while a high school senior in St. Paul, Minnesota. 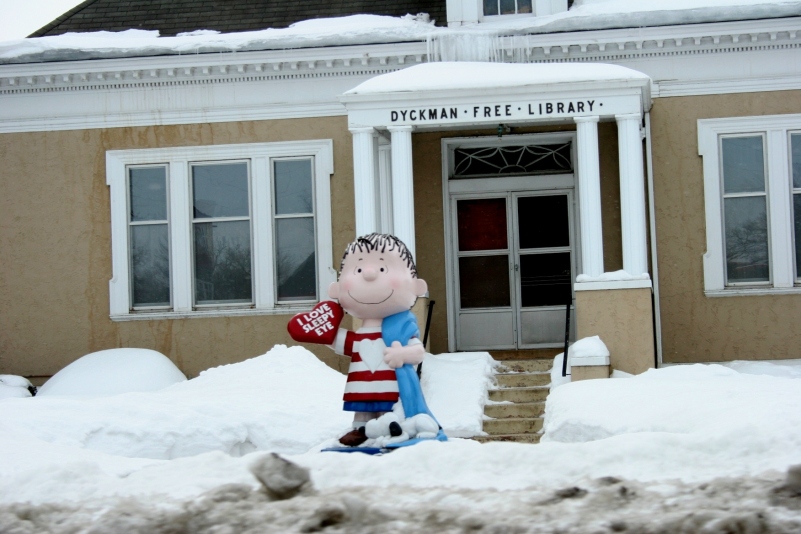 Today Sleepy Eye honors Linus via a statue placed on the lawn of Dyckman Library, located along U.S. Highway 14 in this southwestern Minnesota community. I lived in Sleepy Eye for six months in 1980 but was unaware then of the Peanuts comic strip connection.

Linus Maurer, like his friend Charles Schulz, became a successful cartoonist. He also paints and is a humor and puzzle writer.

I couldn’t find much info online regarding ways Sleepy Eye promotes its Peanuts Connection. There’s a brief mention on the community’s tourism website, but nothing on the library’s website that I spotted during a quick perusal. I’m surprised.

But then I’m surprised The Weather Channel would name a winter storm Linus and expect us to think the reference is to a character from Greek mythology.

FROM THE “A MINNESOTA WINTER DOESN’T LOOK SO BAD” Department:

My son, a student at Tufts University, enjoyed his third snow day in a week on Monday at the campus in Sommerville/Medford, Massachussett. Do colleges make up snow days?

Back “home” in Faribault, Minnesota, we got several inches of snow Saturday into Sunday, nothing compared to the 12 inches plus in the Boston area atop the two feet dropped there last week.

I expect the daughter who is flying to Boston from Wisconsin in March to visit her brother is hoping for more spring-like weather. The trip is about six weeks away. The snow will be gone by then, right?