Five-year-old David of Faribault, aka Apache Shadow, was among costumed reenactors from the Old West Regulators.

WHEN THE STEELE COUNTY HISTORICAL SOCIETY in Owatonna throws an extravaganza, they put on a heckuva an event.

Late Sunday morning my husband Randy and I headed about 15 miles south on Interstate 35 to the Village of Yesteryear for the historical society’s 26th annual celebration of history. I cannot believe that I’ve never known about this extravaganza, which I’d recommend to anyone interested in a free family-friendly day of learning about the past.

Kids, like Kennedy, right, were drawn to the water and the old-fashioned wringer.

From hands-on demonstrations of rope making to washing clothes the old-fashioned way to printing on an aged press to carving wood and working with leather, and more, we observed an array of dedicated and passionate historians showcasing yesteryear.

Two actresses shoot it out in a scenario presented by the Old West Regulators.

Add in costumed reenactors modeling period attire and shooting it out in mini dramas; a country singer crooning Hank Williams’ “Your Cheatin’ Heart;” kids circled around a table in an old country school crafting corn husk dolls; tractors snail-crawling toward the finish line in a slow tractor race; the tantalizing aroma of shredded pork sandwiches and the refreshing promise of icy root beer; 15 buildings, most of them vintage, plus a caboose to tour, and you have a full day.

Dunnell Lenort, who has performed at the Grand Ole Opry and elsewhere, presented a selection of songs, including “I Fought the Law.” It was, he said, “for those who have been on the wrong side of the law.” 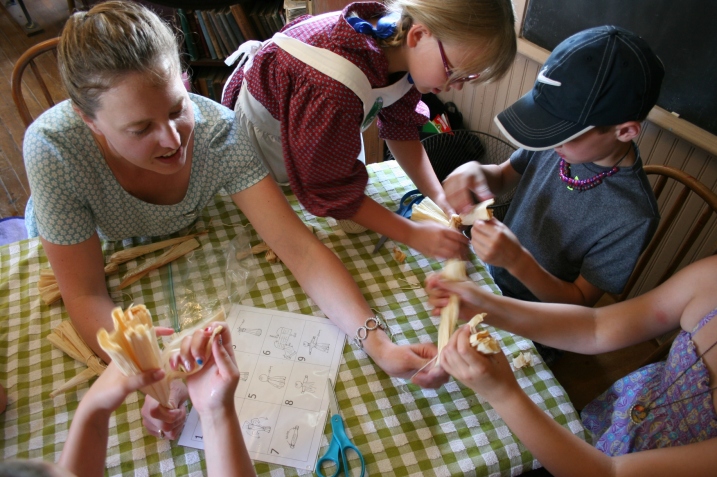 Kids learned how to make corn husk dolls inside the former District 14 country school, built in 1856 and located about four miles south of Owatonna along Lemond Road. The school was closed by consolidation in 1962.

Lest you think the John Deere won this race, you would be wrong. The winner here was the tractor which drove the slowest along about a 50-foot stretch to the finish line in a slow tractor race.

Randy expected we would be there an hour; we left more than four hours later and could have stayed longer. We missed the vintage baseball game and other events.

Pete the printer at work in the Village of Yesteryear print shop.

Of course, my spouse will tell you that, had I not been so interested in the village print shop, we could have knocked perhaps 30 minutes off our extravaganza tour. But given my journalism background; two years of employment at a weekly newspaper which printed auction bills and other items on an old Linotype machine; and my appreciation for the art of printing, I was fascinated by the working print shop and its resident printer, Pete Baxter.

Randy indulged my print obsession and I, likewise, later feigned interest in the engine display over in the agricultural section of the extravaganza.

Letters laid out to spelling “printing.”

Let’s back up to that print shop and printer Pete, who once owned North Cal Printing, as you would expect, in California. Family brought Pete to Minnesota about a dozen years ago. And the old print shop at the Village of Yesteryear was one of the deciding factors in his settling specifically in Owatonna.

Today he’s an enthusiastic volunteer who dons a printer’s apron as he educates visitors, spins a few stories and inks up the press to spew out bookmarks and cards with messages like “Without a love for books the richest person is poor.”

Spend any time with this man who owns a library of 1,500 volumes; is a member of The Wördos, an organization which meets monthly in the metro to discuss errors in local and national media; and who knows the ins and outs of the printing business, and your interest in printing is likely to grow, too. When he mentioned the bit about The Wördos and their dissection of media grammar, usage and more, I wanted to grab back the business card I’d handed him for fear of him scrutinizing my writing. But I didn’t.

I wasn’t about to allow my insecurities to interfere with learning from an old-school printer educated in the 1940s at California Polytechnic State University during the transition from letterpress to offset printing.

Pete’s interest in printing stretches back to his childhood when he often accompanied his dad to a California street car station and stood at the window of a nearby newspaper office watching printers at work.

One day, as Pete dramatizes with arms gesturing, a worker exited the print shop, grabbed him by the arm and shouted, “Get your snot nose off my window.” He hauled young Pete inside, gave him a tour, and, as the printer says, “I was hooked.”

The next Christmas, he received a toy printing press and a case of type. Years later, he would earn a printing degree from Cal Poly and eventually own a print shop.

An original OZ Press print of the Indian princess after whom Owatonna is named, on display in the print shop.

That Pete the printer understands and appreciates printing is obvious to anyone who takes the time, as I did, to listen. He’s quick to spotlight the work of Owatonna’s probably most notable press, OZ Press. OZ co-owners Alice Ottinger and Jean Zamboni—thus the OZ name—donated an 1885 working printing press and artwork to the Village of Yesteryear print shop. Their press specialized in original art printing and silk screening during its 40 years in business, 22 of them in Owatonna.

Jean Zambonia, left, talks about OZ Press at the artisan market. Framed OZ Press prints, on the table, were for sale.

Later I met Jean Zamboni in the new Steele County History Center and learned that she taught art at Minnesota State University, Mankato, before opening her press with friend Alice Ottinger. They designed some program covers for the college, did silk screening and eventually determined they could afford to start a press.

“So that was it,” Jean summarized as she stood next to a table where a limited selection of OZ framed prints were sold at the extravaganza. I wish now that I’d purchased one.

And you likely wish, about now, that I’d informed you of the Steele County Historical Society Extravaganza before the event. Mark it on your calendar for next July. Before that, though, you can attend Christmas in the Village, set for 4:30 – 8:30 p.m. Friday, November 30, and again from 10 a.m. – 2 p.m. on Saturday, December 1. The holiday celebration includes sleigh rides, visits by Santa and Mrs. Claus, children’s activities, selected buildings decorated for the season, a cookie sale, music and more. If it’s anything like the summer extravaganza, you will not want to miss it.

The general store and Museum of Professions at the Village of Yesteryear.

FYI: Click here to learn more about the Village of Yesteryear. Watch for several more posts from the extravaganza to be published here on Minnesota Prairie Roots.