Completed in the fall of 1899, the Historic Trondhjem Church sits atop a 100-foot high hill near Lonsdale. Listed on the National Register of Historic Sites in Minnesota, this Norwegian church has walls constructed with 24 corners to brace it against the wind. Minnesota Prairie Roots file photo.

HOW SACRED THESE PLACES. These country churches. These structures built long ago as gathering places for the faithful.

Country churches, at one time, centered worship and social life in rural areas. Their importance in family and community histories continues. Not so much as active entities, although some still are, but as places preserved. Places of value for their connections to family roots, their history, their art, their stories.

Because I’m drawn to the simplicity and beauty of country churches, I’ve toured many in mostly southern Minnesota. I’ve also attended socials and festivals at many. There’s nothing like the cooking and baking of church folks who welcome guests into basements and fellowship halls.

Among the churches I’ve visited is the Historic Trondhjem Church in rural Lonsdale. While years have passed since I attended an event at this hilltop church and museum, I remain appreciative of this Norwegian landmark. And I remain on Trondhjem’s mailing list.

Some of the grant monies will fund preservation of the altar painting. Minnesota Prairie Roots file photo.

Recently a letter arrived from the Trondhjem Community Preservation Society Board about a matching grant of up to $15,000 from the Margaret A. Cargill Foundation. Through a program titled “Engaging Artists and Communities to Preserve Nordic Heritage Churches,” the preservation group hopes to fund several repair and restoration projects. Those include painting the exterior of the 1899 building, preserving the original altar painting of Christ in Gethsemane by Marcus Holm, replicating the front stair entry and restoring the “Eye of God” window.

That’s a lengthy list of projects. But if I know people like I think I do, they will step forward by the March 31, 2019, deadline with enough monies to match that $15,000 grant administered through Partners for Sacred Places.

If you are interested in donating to the preservation and restoration project at this rural Minnesota church, please send your gift to:

TELL ME: Have you supported a similar project? Let’s hear.

Celebrating lutefisk, lefse & all things Norwegian at the Old Trondhjem Church May 23, 2012

DID YOU HEAR about Ole and Lena’s recent home improvement project?

“We carpeted the bathroom,” says Lena. “We loved it so much we ran it (the carpet) all the way to the house.”

Now, I can appreciate a joke like that. I grew up in a farmhouse without a bathroom, meaning my family used an outhouse.

But when it comes to lutefisk, I’m not quite as informed, being 100 percent German and all.

However, Tina, a full-blooded Norwegian, certainly knows her traditional Norwegian foods. “Lutefisk,” she claims, “is the piece of cod that passes all understanding.”

I’ve eaten lutefisk (cod soaked in lye) once and, excuse me all you Norwegian readers, but I agree with Tina’s assessment. 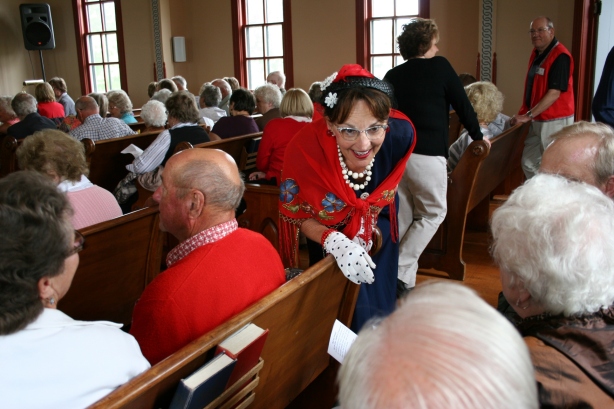 Lena, aka Annette Hustad, chats with audience members before the performance.

Lutefisk, lefse, hotdish and more were the subjects of jokes and songs shared Sunday afternoon by the comedic duo of Tina & Lena during a Syttende Mai Celebration at the Historic Trondhjem Church. As Tina & Lena sang in their version of “This Land Is Your Land,” Trondhjem land would be “east of Lonsdale, southwest of Webster, west of 35.”

Rebuilt in 1899 with parts of the 1878 church, the second Trondhjem Church sits atop a 100-foot high hill. Listed on the National Register of Historic Sites in Minnesota, this Norwegian church has walls constructed with 24 corners, supposedly to brace it against the strong winds. The building is an architectural mix of Greek Revival and Gothic Revival with elements of the Norwegian stave church. Old Trondhjem is opened for special occasions as the congregation built a new church just up the road in 1988.

Driving down the gravel road just south of the Historic Trondhjem Church. The Trondhjem community includes the townships of Wheatland, Webster, Erin and Forest.

And I would add that the 1899 historic wood frame Trondhjem church is anchored atop a windy, very windy, hill just off Minnesota State Highway 19 and along a gravel road that dips and rises like the rolling waves of a stormy sea. I expect the immigrants who arrived here from Trondhjem, Norway, in the 1860s and 1870s experienced stormy seas before settling among the rolling hills and woods so much like the Motherland. 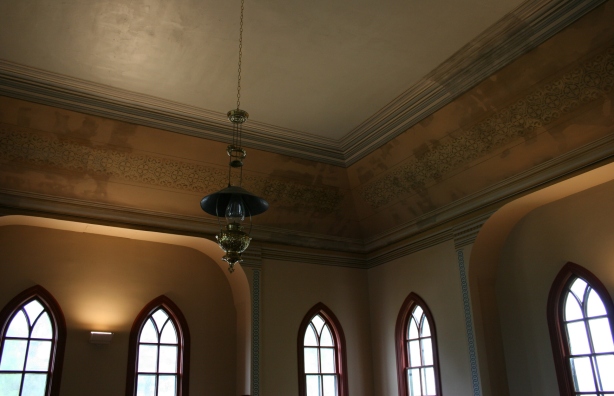 During restoration of the church, a pressed metal cover on the ceiling was removed to reveal original plaster with stenciling. As you can see, the church is bathed in light from the many windows, even on a rainy day.

Beautiful pews and the original pine floor grace the sanctuary.

The quaint Trondhjem store is tucked into a cupboard in a corner of the fellowship hall, which also includes a mini museum of historical items, photos and artifacts from the Trondhjem area.

That Norwegian heritage and the history of this place, this Trondhjem in Minnesota, brought about 120 people together on Norwegian Constitution Day for the annual meeting of The Trondhjem Preservation Society and that entertainment by Tina & Lena, who have been on the road for 28 years, performing in 20 states.

Their motto seems to be this: “It is bad to suppress laughter because otherwise it goes down and spreads to your hips.” 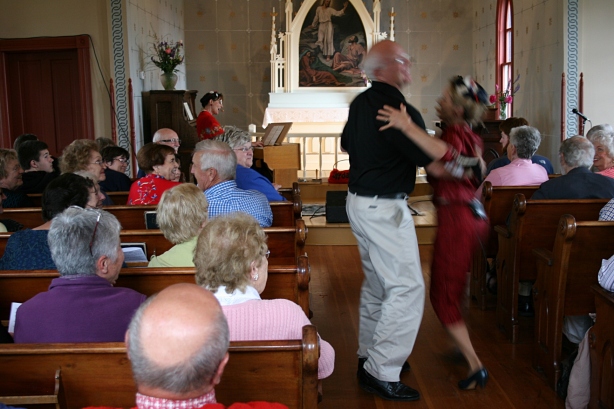 Tina pulls an audience member into the aisle for an impromptu dance.

There was no chance in, well, you know where that Tina & Lena could suppress the laughter of the Trondhjem audience. The long-time friends rocked the church with laughter and song and dance, personalizing their performance to the location. They engaged the audience—singling out individuals for attention, pulling two men into the church aisle to dance and even calling upon Preservation Society members to sing in “The Hotdish Hallelujah Chorus.”

Tina & Lena, who in real life are Sue Edwards of Alexandria and Annette Hustad of Glenwood, sang in the church choir while growing up in Canby in southwestern Minnesota. Just knowing they are from my native prairie endears them to me.

But it is their ability to slip into the roles of Norwegian women—lilting accents and all—and tell good, clean jokes appropriate for all and spin stories and sing and dance and interact with others that endears them to so many. These women, with energy and enthusiasm, exude absolute passion for making people laugh.

And what Minnesotan wouldn’t laugh at this Tina & Lena joke: “Oh, we love hotdish. Hotdish is a wonderful Minnesota food that melts into your Jell-O and runs into your buns.” (For you non-Minnesotans out there, “hotdish” is the same as “casserole.”)

The church/preservation society ladies lay out a delectable spread of Norwegian goodies.

Just a few of the treats in the Norwegian buffet. That’s lefse on the right.

No hotdish, Jell-O or buns were served during the fellowship hour following the performance and annual meeting. But scrumptious Norwegian treats—none of which I can identify by name (except lefse) because, remember, I am German—were laid out on tables in the social hall.

Let me tell you, these descendants of Norwegian immigrants have not forgotten the baking traditions of the homeland.

Trondhjem pastor, the Rev. Howard White, had it right when he earlier prayerfully thanked God for the gifts of memory, laughter, tradition, heritage and new beginnings.