THERE’S SOMETHING ABOUT AN AGED pick-up truck… Perhaps it’s the agrarian connection or the nostalgic appeal. Or even the vehicle design that conveys comfort in its rounded shape.

Whatever the reasons, I am draw to vintage pick-up trucks. Randy, too. He wishes he owned one. And a 1964 Chevy, too.

But since we don’t and never will, I settle for visual enjoyment with my eyes and through the camera lens. 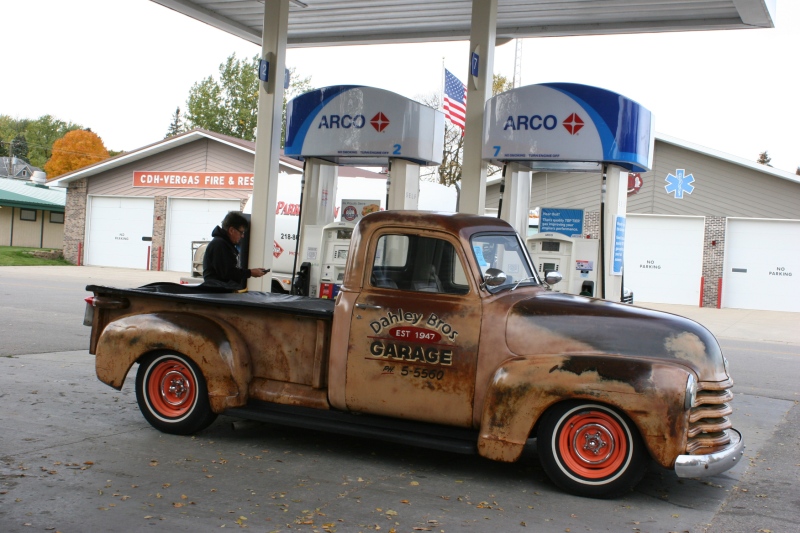 As I waited in the van recently for Randy outside a Vergas, Minnesota convenience store, a lovely old pick-up pulled up to the gas pumps. Without hesitation, I grabbed my camera, stepped from the van and snapped a few images of the portable piece of art temporarily parked at the pump. 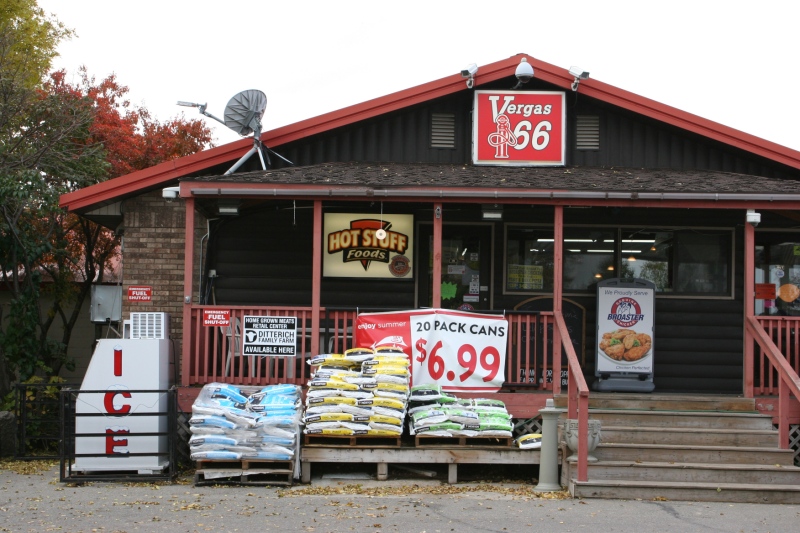 And then I swung my camera the other way to photograph the store exterior because that appealed to me visually also with its welcoming front porch and log cabin style design. 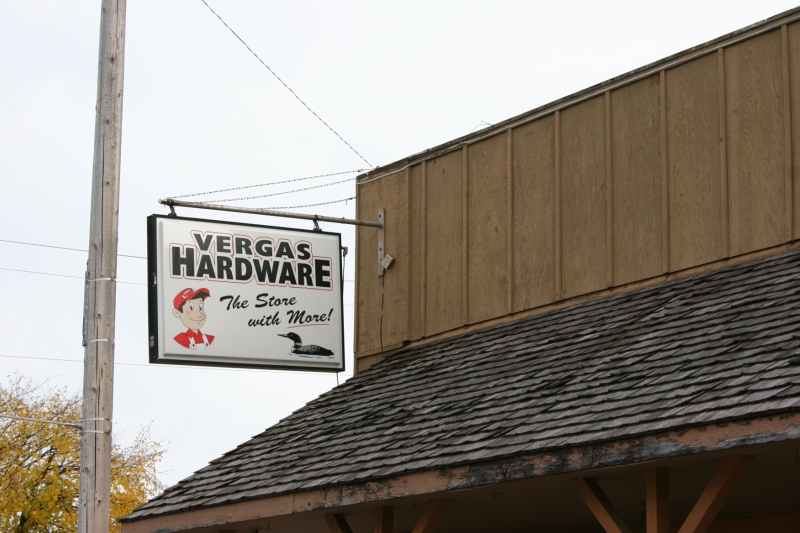 Then we were off to find the world famous Vergas loon sculpture. And, as we passed through the business district, I snap-shotted the hardware store sign through the window. Because I have this thing about hardware stores, too, and about signs. Small town memories and art.

MY HUSBAND WOULD HAVE jumped on the invitation without hesitation.

But I held back, reluctant to accept Harold Martin’s offer to ride in the Rice County Steam and Gas Engines Show parade. You see, I’ve never ridden in a parade and I feel more comfortable on the audience side where I can blend into the crowd, hidden behind my camera.

So, initially, Randy and I declined and told Harold we’d catch up with him if we changed our minds. 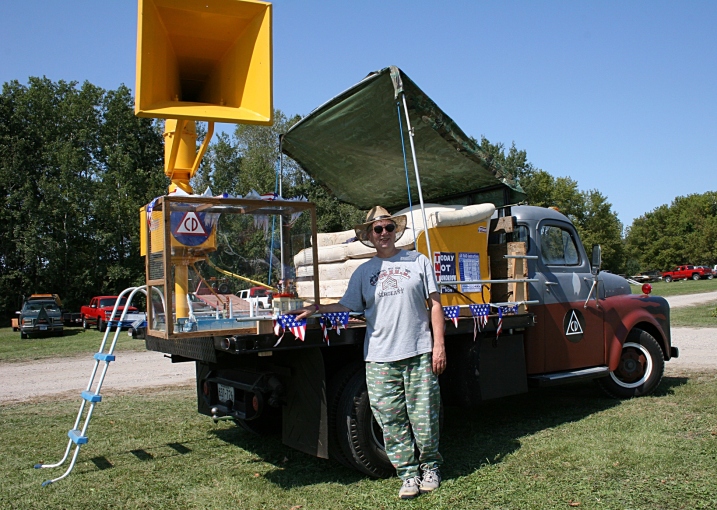 Harold Martin of rural Northfield with his 1948 Dodge truck outfitted with a 1960 Civil Defense siren.

“I don’t want to do it,” I reiterated after Harold and his friend, Gabe, drove off in Harold’s 1948 Dodge truck with a 1960 Civil Defense siren mounted on the back and a rescued-from-the-side-of-the-road sofa planted behind the cab.

That would be our parade spot, on that cream-colored, canopied couch.

I just couldn’t picture myself up there, acting like I was the queen of something or other.

And just like that I caved to peer pressure and we headed down the dusty gravel road behind and between tractors, pulled the swimming pool ladder from the back of Harold’s truck, scampered up (well, not quite scampered) and began our tour along the parade route. 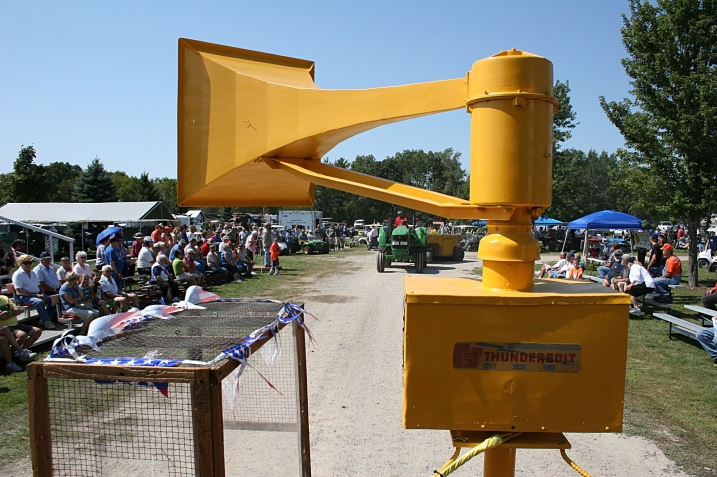 My sofa seat view of the parade route as the Civil Defense siren swings my way. I covered my left ear (I’m deaf in my right) every time the siren passed by my face. These warning sirens were used from 1952-1970, Harold tells me.

And you know what. Except for the rotating and screaming air raid siren swinging uncomfortably close to us on the couch, the whole experience was simply a hoot. I shot photos and watched the faces of audience members who mostly smiled, finding the humor in Harold’s quirky, movable warning system.

About that Harold. He calls himself an opportunist, not only scooping up the freebie couch, but also saving the outdated and scrapped 1960 Civil Defense siren. His nephew was about to toss it.

“Somebody should keep one of these,” he remembers thinking before doing just that, then repairing the siren and mounting it on the back of his vintage Dodge. He showed me a photo from 1952 of a siren, like his, attached to a truck. The portable warning system was used in Seattle and had a range of eight miles.

Harold’s siren, obviously, doesn’t have that range or volume. 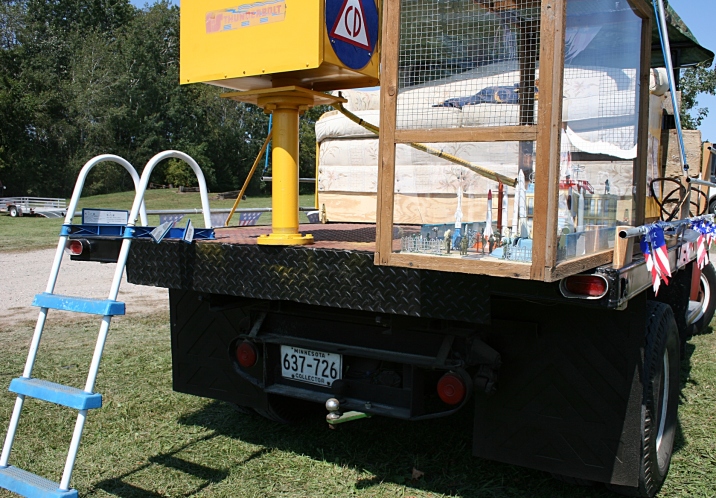 The U.S. Air Force Missile Test Center replica is housed in the box, right. And there’s the pool ladder Randy and I used to climb onto the back of the truck.

He does have, though, a missile warning system in place. Or, more accurately, he has a U.S. Air Force Missile Test Center, purchased on e-Bay for $50, attached to the rear of the flatbed. The 1963 Marx toy set shows a guarded scene of U.S. missiles ready to launch against the Soviet Union.

Remember the Cold War school drills of hiding under your desk and covering your head with your hands? Pretty silly, huh?

But then so is settling onto a recycled couch and riding on a make-shift Civil Defense truck in a rural Minnesota parade. Who cares, though? Apparently not me.