The first-ever 1938 Minneapolis Moline UDLX, one luxury tractor with an enclosed cab.

Inside the cab of the rare Minneapolis Moline UDLX, a comfort tractor that even includes a radio, that box behind the steering wheel.

“If I owned your tractor,” I tell Dennis, “I would have to live in it.”

Ah, yeah, that’s worth more than my house, I think.

But then Dennis’ Minneapolis Moline is only one of 150. And with serial number 310001X, it was the very first production comfort cab tractor ever built. That’s as in the first one to roll off the production line.

Dennis, who has owned his tractor for six years after buying it at an auction in Iowa, says Minneapolis Moline began manufacturing the UDLX in June 1938, but stopped production in December. No one was buying the tractors because of the $2,200 cost, he explains. A typical tractor of that size sold for $800 in 1938.

And farmers were a bit skeptical about needing the comfort of a cab and luxury features like a cigar lighter, sun visor, radio, seating for two and a dome light.

The 5-speed transmission with high range allows the tractor, which I think resembles a car more than a tractor, to travel up to 40 mph.

“Farm during the day, drive to town at night,” a sign on Dennis’ tractor reads.

NOTE: I saw Dennis’ rare 1938 Minneapolis Moline UDLX at the Rice County Steam & Gas Engines, Inc. show, which ends on Sunday, September 6. Gates open at 7 a.m. and close at 5:30 p.m. at the show grounds just south of Dundas (Northfield) along Minnesota Highway 3. Watch for more photo blogs from this event.

Signage on the Minneapolis Moline UDLX. 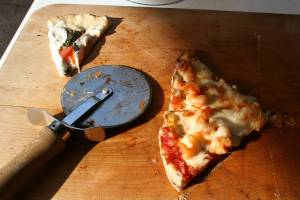 The pizzas are baked for 3 - 5 minutes in this 700-degree outdoor brick oven.

“You’ve come a long way since the days of meat and potatoes,” I tell Jan as she slides another pizza into the outdoor brick oven.

“And vegetables,” she adds, meaning the side vegetable dish that always accompanied the mainstay meat and spuds.

We laugh, sharing the bond of former farm girls who grew up on meat and potatoes.

I have been watching Jan and her husband, Dan, for quite some time now as they work together in their Northfield backyard. Dan prepares the pizzas, rolling homemade crusts and then topping them with a variety of meats and vegetables and cheeses.

We—Parts Department Inc., Northfield (NAPA) employees and their families—are gathered here for a pizza party, an end of summer celebration. As the sun sinks, Dan and Jan are still making pizzas. They began hours ago.

But those of us here cannot seem to get enough of these delicious, thin-crust homemade pizzas baked at 700 degrees for three to five minutes in the outdoor brick oven. I eat more pizza than I think I’ve ever eaten in my life.

But this is darned good pizza.

Dan and Jan know how to cook.

We’ve been to their house many times for their home-cooked food. Last winter they made barbequed ribs in the brick oven and served those along with crab legs at a company party. They’ve also baked turkeys and bread outdoors.

The interior oven temperature remains unaffected by the air temperature, Dan says. If it’s 20 degrees below zero outside, it’s still 700 degrees inside the brick oven.

“How did you learn how to cook in this?” I ask.

Dan laughs, admits to a few disasters, like the first time he placed the pizza on a pizza pan inside the oven. That failed. The pizza goes directly onto a rack in the oven, not on a pan.

After watching the couple expertly make pizzas and after sampling more pieces than I should have, I concluded that if Dan and Jan ever leave the auto parts business, they could successfully open Dan & Jan’s Pizzeria. 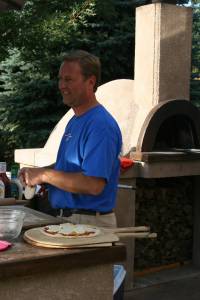 Dan prepares a pizza crust at his backyard work station.

Dan prefers to use sliced, rather than shredded, mozzarella cheese atop his homemade pizzas.