On the road to recovery via Minnesota Teen Challenge September 21, 2009 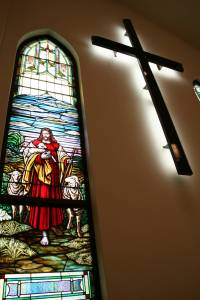 "I once was lost but now am found, was blind but now I see."-- Amazing Grace, How Sweet the Sound

JUSTIN, 24, FORMER HEROIN ADDICT, took the microphone and shared his story of addiction. It was not unlike the previous stories told by recovering addicts who are part of Minnesota Teen Challenge & Adult Programs.

Their addictions had consumed and destroyed their lives, and those of their families.

Yet, it was Justin’s story that most touched me when I heard him and others speak during a Sunday morning worship service at Trinity Lutheran Church in Faribault.

Well-dressed in black dress pants, a white shirt and tie, with closely-cropped hair, he could be the boy next door.

You would never guess that for years, Justin pumped heroin into his veins. Until the day he flipped his car three times and lay in a hospital bed. It was the defining moment in this young man’s life. It was the moment he heard his mother, whom he describes as “a woman of God,” say: “I want my son back.”

And then Justin, who will graduate from the Minnesota Teen Challenge and Adult Programs in a month, sang Amazing Grace. I don’t think I’ve ever heard a more heart-felt rendition of this song that speaks to God’s grace and forgiveness.

Tears rimmed my eyes as I thought of Justin’s mother, who wanted only to have her son back. More tears surfaced as 20 others joined Justin in singing “My chains are gone, I’ve been set free.” I could almost see the chains of addiction falling from around the wrists and ankles of these men—some of them in their 20s, some in their 50s and others in between—who had come to share their message at Trinity.

In their faces, in their smiles, in the tears some wiped from their eyes, I could sense the peace that now encompasses their lives. There’s no faking this stuff. These men—these former meth users, these prescription pain medication abusers, these alcoholics, these hurting men, some who attempted suicide, lost their families, lived on the streets, belonged to gangs—seemed deeply sincere.

These are men who, in a shared path to recovery, in a shared faith, now love, hug, pray and care for each other.

They have transitioned to this point by trusting in God, through counseling, attending chapel and classes together, and more at Minnesota Teen Challenge & Adult Programs, one of the largest recovery programs in the state. The faith-based organization has campuses in Minneapolis, Brainerd and Duluth and treats teens through adults, both men and women.

If you ever have the opportunity to hear these individuals speak, do. Their message is incredibly powerful. And if you’re a mom like me, you’ll be profoundly moved by stories like Justin’s that speak to the depth of a mother’s love and to a son’s reclamation of that love.