No bones about it, I like these new Faribault health care centers September 16, 2009 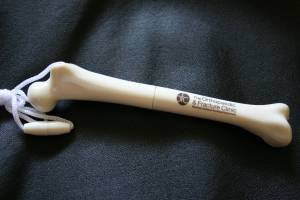 Look at this freebie pen I picked up at the Orthopaedic & Fracture Clinic. I also got can coolers, a magnet, oval pill box, grip strengthener AND a free ice cream sandwich during the open houses in Faribault.

SOMETIMES I THINK people in my community take local health care for granted.

Don’t they understand, I often wonder, how fortunate we are to have such a wide range of outstanding medical care right here in our backyard?

Take it from someone who didn’t always have immediate health care available. I mean as in blocks, or a few miles, away. Even today the distance to a clinic and hospital from my hometown of Vesta in southwestern Minnesota spans about 20 miles.

Vesta once had a doctor. Old Doc Pete. Penicillin Pete, they called him. I remember him. He stitched up my head once, gave me some red stuff to swab on my ankle when I was stung by a zillion wasps, once plucked a pebble from my sister’s nostril.

But then Dr. Peterson (or was it Pederson) retired or died, I don’t remember which, and we had to travel to Redwood Falls to see the doctor.

Today I live in Faribault, where I can reach a clinic or hospital in mere minutes. For that I am thankful, extremely thankful.

Last night my husband and I checked out the latest in the Faribault medical scene—a new surgery center at District One Hospital and the new headquarters for Rehab One and The Orthopaedic & Fracture Clinic.

It was only 15 months ago that I underwent total right hip replacement surgery at District One. I’ve had several other surgeries there through the years. So I was interested in touring these facilities during their open houses. I was impressed.

At the ortho and rehab center, I most appreciated that everything is now on one main level. No elevators. No stairs. Easy access, plain and simple. That’s important when your mobility is limited. I know.

Down the road, the new surgery center now has its own entrance. No more walking through the hospital’s emergency entrance to get to the surgery wing. That’s a very good thing.

As I stood outside the former orthopaedic building housed in the historic Seabury Divinity School, I was thankful for one more change: No bats. That’s right. The driver who shuttled us on a golf cart during the open houses said he’d heard stories about bats inside the facility. Although I’d never seen one during my many appointments there, I welcomed the news.

Now, if I win the door prize drawing for a free surgery…

We removed a piece of sheetrock to access the chimney in an upstairs bedroom. One project leads to another as we'll need to fix the floor and wall and repaint the room.

He huffed and he puffed, and he blew the house in.

The wolf blew down the houses made of straw and of sticks. But he could not destroy the sturdy brick house.

That’s too bad because, if he could, I would hire the strong-winded wolf right now, today.

Not to blow down a brick house, but to demolish a brick chimney.

On Saturday we started one of those house projects which, now, in hindsight, seems perhaps a bit foolish. For years we have talked about removing the old brick chimney that runs through the attic, an upstairs bedroom, through the kitchen and down to the basement floor.

The portion that stuck above the roof was removed during a previous reshingling project. It was then that the thought of totally dismantling the useless chimney first surfaced.

Now talk has become reality as we embark on the purchase of a new heating and cooling system. Plans are to run additional ducts through the former chimney area to the upstairs bedrooms. So much for my idea to add closet space there. The duct plan makes sense, in theory.

But theory is not tearing down walls to access the chimney. Theory is not slamming a hammer or wedging a pry bar between cemented bricks that have been in place since 1940. Theory is not carrying five-gallon buckets of bricks down the stairs, through the house and outside to two piles on the driveway. Theory is not a sore hip and a sore back and sore leg muscles and sore arms.

What were we thinking?

About five hours into the project and half way done, I am questioning the sensibility of this idea.

But then I remember the furnace guy’s response when I called to schedule a home visit. He’s been here before, tuning our 1960s vintage furnace. At first he didn’t remember me. But when I gave him our address, he said, “Oh, you have that old furnace.”

Yup, that would be us.

And then, after inspecting the aging furnace again and suggesting more ducts, he asked, “Do you have a carbon monoxide detector?”

Do you have a wolf for hire? 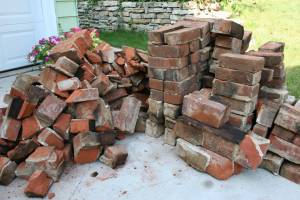 Two brick piles, one for fill, the other to recycle, are accumulating on our driveway. Anyone want bricks?

My son and I aren't brick layers, but we're trying to keep some order as we stack bricks on the driveway.