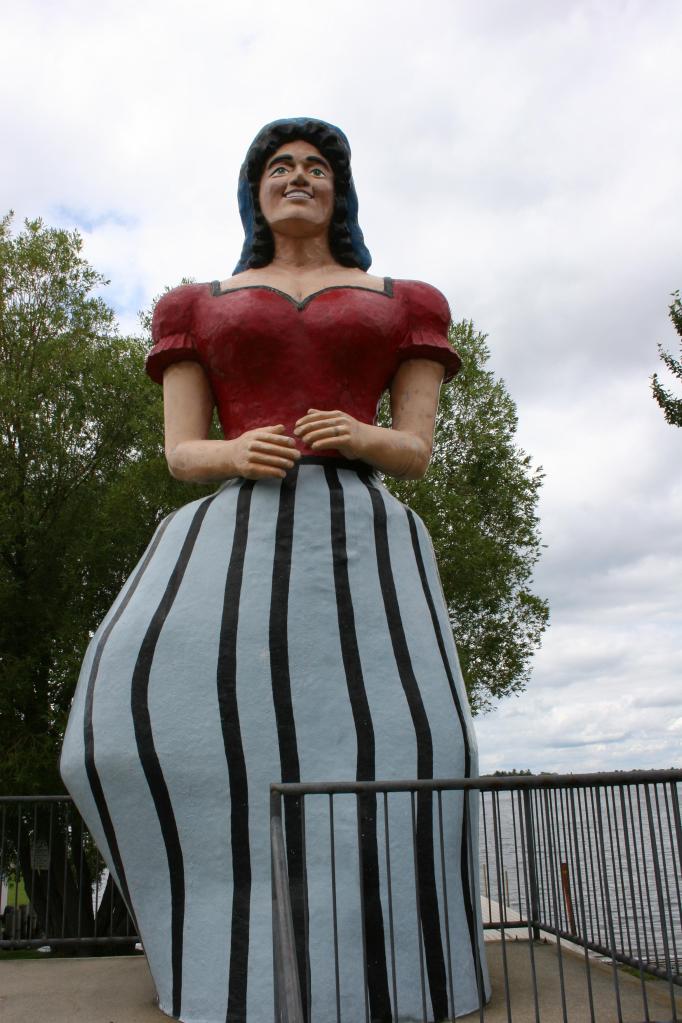 I’VE BEEN INVITED to Hackensack, home of Paul Bunyan’s sweetheart. Lucette Diana Kensack lives (or technically, stands) along the shores of Birch Lake next to a quaint 1930s log cabin that is the Hackensack Lending Library.

The lakeside of the Hackensack Lending Library. To the left stands Lucette.

Unfortunately, I’m not traveling to Hackensack, which lies midway between Brainerd and Bemidji and marks the half-way point on The Paul Bunyan Trail. I was just in Hackensack last summer and another trip that far north is not on the schedule. But if it was, I tell you, I would want to stay at that Hansel and Gretel cottage. (I don’t care that it’s a private home.)

Instead, I’ll be back here in southern Minnesota awaiting results of a poetry competition. You see, some time ago I submitted two poems for possible display at The Northwoods Art Festival and Book Fair in Hackensack from 10 a.m. – 4 p.m. on Saturday, August 28.

Recently I learned that both my poems were selected for display and are vying, like all the chosen poems, for “Works of Merit” designation by long-time Brainerd poet Doris Stengel. The visiting public will also vote for their six favorites as “Popular Choice” award winners. As far as I know, no cash prizes are made. Rather the prize lies in peer and/or public recognition.

I would love to tell you which of the untagged poems are mine. But since I don’t want to be accused of voter fraud, illegal lobbying or some other such poetic “crime,” I have sworn myself to secrecy. I’m quite certain that revelation of my poems’ titles could lead to disqualification.

That disclaimer aside, if you’re in the Hackensack area on August 28, check out the arts festival and specifically the poetry display at the Union Congregational Church. Minnesota writers and illustrators will be at the church signing and selling their books. At 1:30 p.m., the award winners will be announced and display poets can read their poems.

But there’s more to this fest than the written word. You also will find artists who work in paint, clay, metal, wood, fiber and photography. Throw in food and music and you have a genuine Paul Bunyan-worthy Minnesota festival.

Come to think of it, perhaps I should have penned a poem about Paul Bunyan.