A practical use for icicles from snowy Minnesota December 27, 2010

I HAD THIS EPIPHANY, this brilliant moment, the other night as I watched my husband swing his scoop shovel at icicles hanging from the house roofline.

He had just descended the ladder after scooping several snowstorms worth of snow from the roof when he began knocking mega icicles from the ice-dammed eave troughs with his shovel. Clank. Clank. Clank.

For days I had admired the growing length of those icicles, the longest of which stretched to perhaps six feet. What extraordinary weapons they would make for sword fights, I thought.

But, the practical homeowner in me realized we needed to remove the weaponry to protect the fort, AKA our house.

Ice dams and icicles on the west side of our house.

So, Thursday afternoon I walked across the street to borrow a roof rake from my neighbor. For perhaps 45 minutes I floundered in thigh deep snow banks, pulling snow from the house and garage roofs until I felt like my arms would fall off.

I also knocked down as many of those icicles as I possibly could until I came dangerously close to also knocking out the bathroom window.

I nearly hit the bathroom window while removing snow and icicles from the house.

Anyway, back to that light bulb moment.

“Do we have any ice for the cooler?” I hollered to my husband as he hammered away at the icicles I had missed during my earlier reckless attempt at destroying the ice build-up. By this time, the attack with a scoop shovel method was no longer working.

He looked at me with skepticism, wondering, I’m sure, what exceptionally brilliant idea I had now. I don’t like to boast, but my idea to use icicles, in lieu of purchased, bagged ice, to cool food in a cooler rated as an environmental, cost-saving good use of natural resources. (We needed ice to keep our food cold as we traveled on Christmas Eve.)

Fortunately for me, I have a husband who doesn’t always dismiss my seemingly crazy ideas.

I dragged a cooler up from the basement, handed it outside to him and he continued hammering the ice until we had a whole cooler full of icicles. 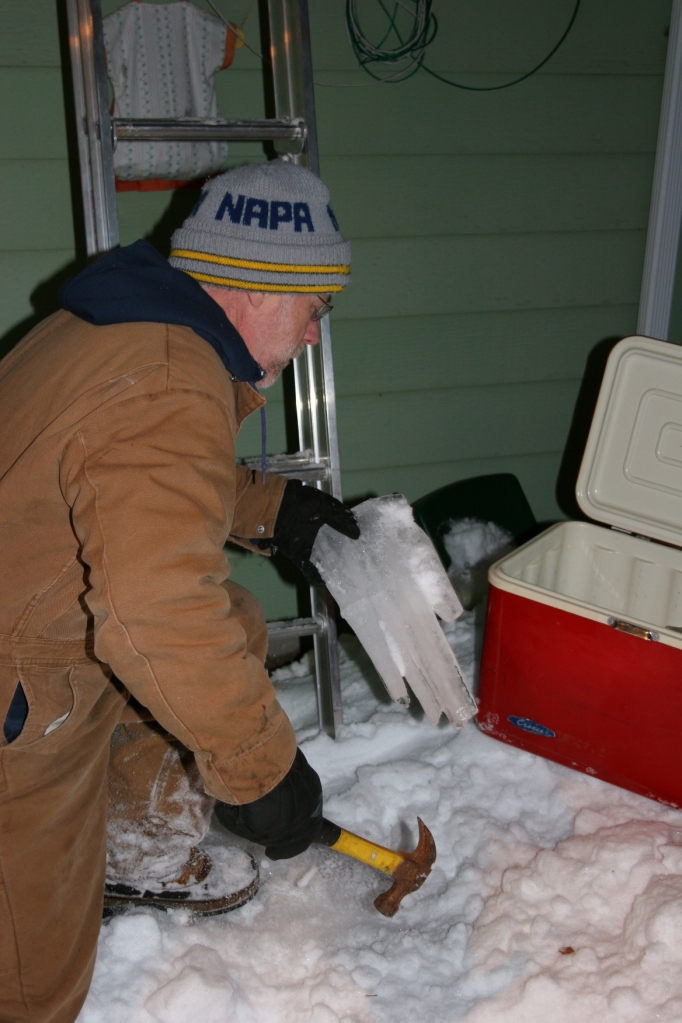 My husband begins the task of harvesting icicles with a hammer.

Ice chips fly as Randy breaks the icicles into smaller chunks that will fit into the cooler.

The cooler was only half full of icicle chunks when frozen fingers led me to stop photographing the ice harvest.

Our teenage son made some comment about saving the ice until summer, putting a modern day spin on the concept of harvesting lake ice and packing it in sawdust inside an ice house.

Now, if you were to peek inside the chest freezer in my basement, you would find, um, yes, broken segments of icicles that will work perfectly for chilling beverages this summer.