My need to know about the Minneapolis tornado May 22, 2011 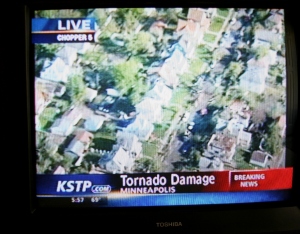 A shot of my television screen, showing KSTP coverage of the May 22 Minneapolis tornado.

YOU’RE A NEWS JUNKIE,” he says.

I don’t deny it, especially on this stormy Sunday when a tornado has swept through north Minneapolis, killing one and injuring around 20 others, according to the latest news reports.

Much of the afternoon, after hearing of the storms, I parked on the sofa, eyes fixed on the television screen. I also texted my oldest daughter, who lives in south Minneapolis.

When she finally replied to my “Are you in a safe place?” text, she asked, “No, why?”

So I clued her in that a tornado was moving through north Minneapolis. She was at a friend’s house after attending a concert and apparently not near the storm’s path.

But how was I, the concerned mother, to know? To me, Minneapolis is Minneapolis and my daughter could be anywhere.

My husband, the one who called me the news junkie, claims south Minneapolis lies 10 miles from north. I have no idea.

Once I knew that my oldest daughter was OK, my thoughts shifted east to Wisconsin, where the second daughter lives. I really wasn’t too worried, until 4:49 p.m. when she sent a text: “Sirens just went off.”

At that time my husband and I were wrapping up a shopping trip to pick up hardware and gardening supplies and a few groceries before filling up with gas and heading home.

The daughter who lives in Appleton on Wisconsin’s eastern side said the area was under a severe thunderstorm warning and flood watch and that she was at her apartment, but not in the basement.

Uh, huh. “Did I not teach you to go to the basement when the sirens sound?” I thought, but did not text.

Her follow-up message mentioned an unconfirmed funnel cloud in a nearby town.

That text reminded me that I really wanted to watch the 5 p.m. news. And that is when my spouse called me a news junkie.

Yes, I am a news junkie.

But I’m also a mom and a Minnesotan—two equally good reasons for staying informed.

Bubba'Q's logo and slogan on the side of their BBQ trailer.

They’re about as cheerful and friendly a couple as I’ve met. Talkative with a definite accent that I would have placed as more southern Missouri than southeastern Iowa. They set me straight, in a kindly way, on the pronunciation of Ottumwa, a community of 25,000 along the Des Moines River.

Big smiles accompanied their language lesson and an intro to barbecuing at the Minnesota in May BBQ Contest in Faribault Saturday. Nearly 60 teams competed for about $10,000 in prizes in the two-day Kansas City Barbeque Society-sanctioned event.

While Bubba and Sabrina didn’t win a prize this time—they have taken grand champion honors in other competitions—they seem content simply to barbecue, win or not. Clearly, this is their passion.

I wasn’t able to sample any of Bubba-Q’s meats, but Bubba tells me their style is “a little sweet, a little heat.”

I’ll take his word for it.

The ribs they prepare for competitions differ, they say, from the ribs prepared in their restaurant, where customers prefer them falling-off-the-bone tender. The judges, want tender, but chewable, still on the bone ribs.

The two agree that no matter how often and where they compete, and they’ve traveled to many competitions as far away as New Mexico and Las Vegas, they never quite know what will please the judges. Bubba says that’s OK. Then he smiles. Again. He’s just that kind of guy—with a face that shows he’s happy to be barbecuing, whether in Iowa or Minn-e-soooooo-ta. 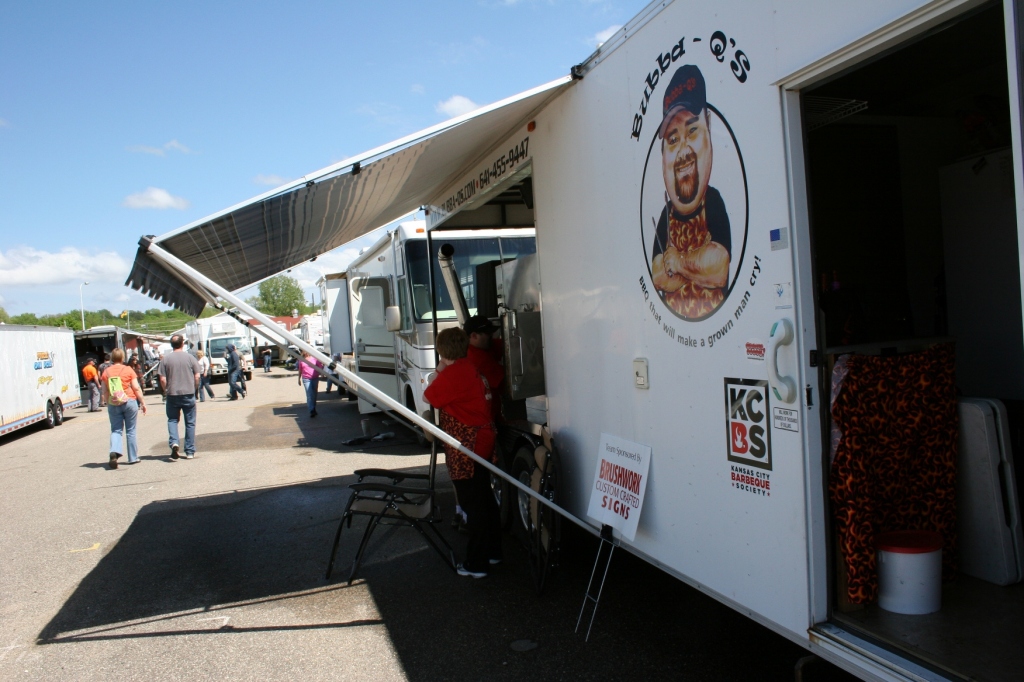 Bubba and Sabrina's home on wheels and traveling BBQ central. 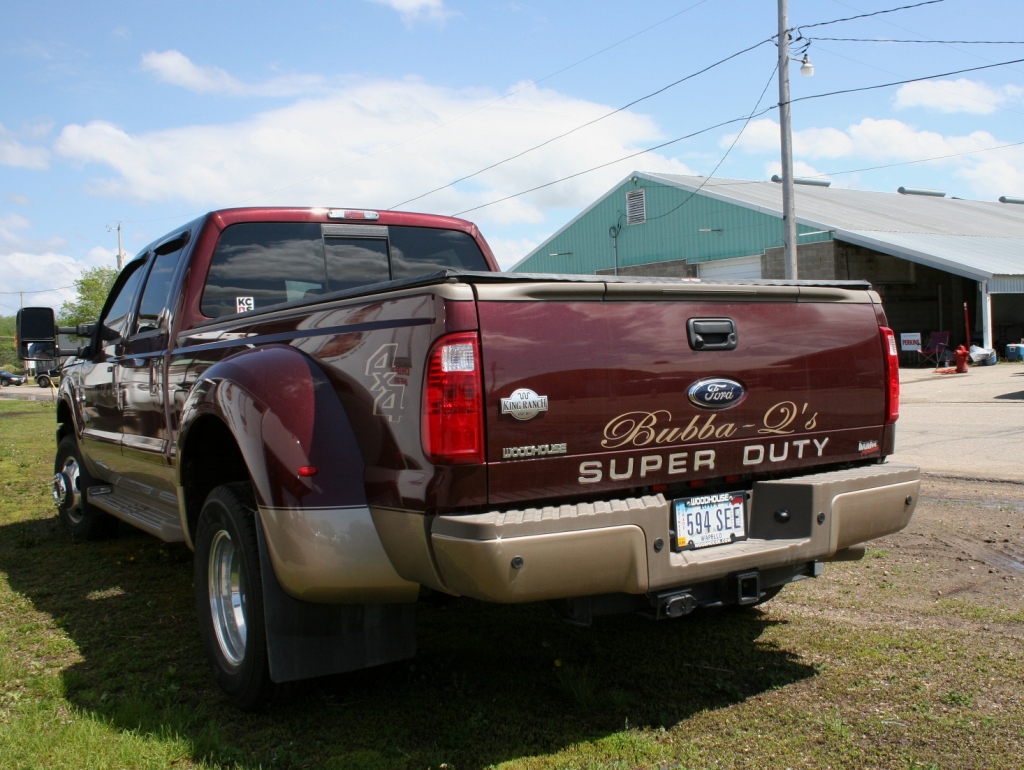 Even their pick-up truck advertises their barbecuing passion.

WATCH FOR MORE photos from the Minnesota in May BBQ Contest in future blog posts.

For the first time ever, Faribault hosted the Minnesota in May BBQ Contest at the Rice County Fairgrounds.