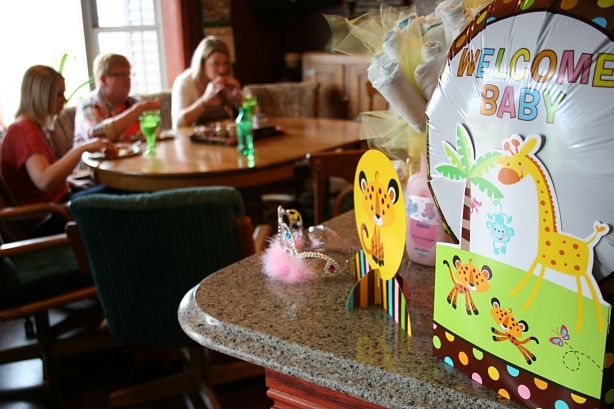 In the background, an aunt-to-be, the grandmother-to-be and the mother-to-be enjoy a little lunch before gift-opening at a family baby shower.

LEAVE IT TO MY CREATIVE SISTER, Lanae, and her equally creative daughter, Tara, to create fancy food which, when photographed, could grace the pages of a food magazine.

No wonder they asked me to simply bring veggies and dip to a baby shower Saturday afternoon for my nephew’s wife, Adrienne. I possess neither the knowledge, skills or talent to pull together a Martha Stewart-like spread, although I suppose I could be taught.

Just look at these dainty and lovely foods. Pretty fancy fare for someone like me who admits that cooking is not her forte. 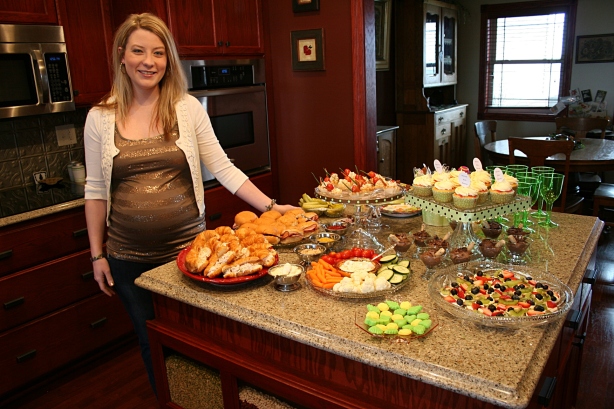 I pulled out my notebook at one point during food preparations and joked that I would be taking notes for future reference. I didn’t. Rather, I will rely on photos to guide me when I am in the position someday as the baby shower food planner.

For this Saturday afternoon, I was quite content to allow the creative mother/daughter team to pull out their pastry bags and their dip mixes, their chocolate shavings and chives spears and more to craft morsels that were almost too pretty to eat.

The mother-to-be was impressed. Who wouldn’t be?

A cheesy bacon mix was piped into each phyllo shell and then topped with a grape tomato, a snip of bacon and a spear of chives. So colorful and absolutely delicious. You cannot eat only one of these.

A triple berry fruit dip mix was piped onto these mini plates for dipping teddy grahams. So cute. 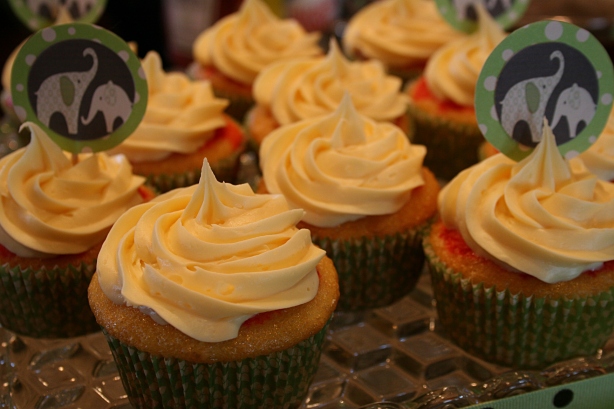 Perfect yellow cupcakes with a layer of raspberry under the frosting, topped with adorable elephant graphics.

After all in attendance ooohed and ahhhhhed over the food and over foamy punch in which a rubber ducky floated, we also discussed pregnancy weight gain and birth weights and the sex of the unborn baby in the 3-D ultrasound images that were passed around. There was also talk about cute babies and ugly babies and whether the unborn child would have “Kletscher ears,” meaning ears that aren’t exactly tiny and head-hugging. 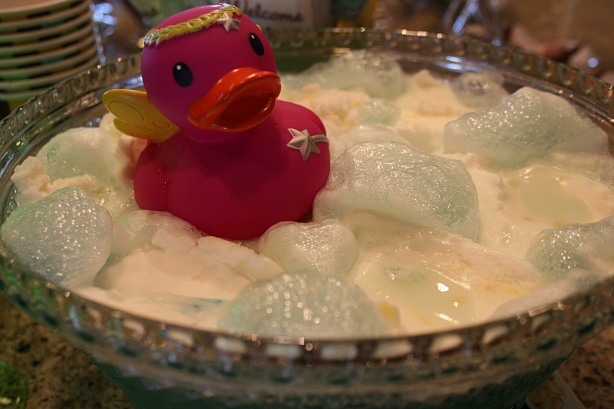 The punch, made to resemble soapy bathwater, includes ginger ale, blue Kool-Aid and pineapple sherbet to form the "bubbles." I may have missed an ingredient in this punch prepared by Vicki.

We laughed and savored each others’ company and the joy that always comes in anticipating the arrival of a new family member. I fully expect that when we gather again, after the birth in mid June, we’ll sit with open arms, each of us awaiting our turn to hold the baby, the precious, precious baby.

With only two months to go until her son/daughter arrives, Adrienne opens gifts.