WHEN I PHOTOGRAPH an event such as the mission festival last Sunday at Marquardt’s Grove, rural Janesville, I slip into my sleuth persona. Hey, I read Nancy Drew mysteries as a young girl, what can I say?

The overall scene at Sunday’s mission fest, looking toward the stage and worship areas.

Perhaps it’s not as much sleuthing as observing which, I suppose, is the essential component of good detective work. First I’ll view the big picture, the overall scene. And then I’ll begin to break it down, to notice the details.

It takes concentration, effort, and an ability to understand the smaller parts which, pieced together, comprise the whole.

This I do all the while also trying to remember what I am hearing and the general mood of the setting. It is not easy because I sometimes become so zoned in on shooting images that I shut down my other senses.

The other challenge comes in being respectful to those attending such events. On Sunday I was especially concerned about that given this was a worship service. I think, I hope, that after awhile worshipers no longer noticed me slinking around trees, weaving my way past temporary plank pews or pointing my camera down at their hands and toward their faces.

Yes, I expect observers sometimes wonder what exactly I am photographing. Digital photography has unleashed my creativity. I aim to tell a story with my photos, to take you there, to show you the details that make life especially interesting.

Here then are some of my detailed photos—the ones you likely would not think of taking—from the mission festival of Freedom and Wilton Lutheran churches.

The first detail: the sign on the front steps of Freedom Church about a mile from the mission site in Marquardt’s Grove.

The jacks, as they are termed, which hold the planks in place, have been used for some 60 years. The planks, for the “pews,” are borrowed from a local lumberyard and then returned after the mission festival.

Sharlou Quiram measured the makeshift altar before crafting a cross design quilt of satins, velvets and brocades nearly 10 years ago. It hides the altar, “a bunch of really old board nailed together,” says Len Marquardt, and in use for 60 years. Flowers come from parishioners’ gardens, patios, decks, yards. 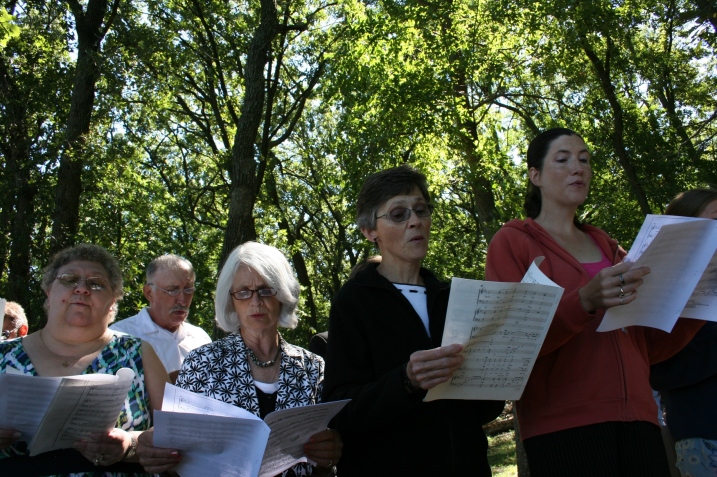 When I took this photo of the choir, I was aiming to emphasize the outdoor setting in the woods. 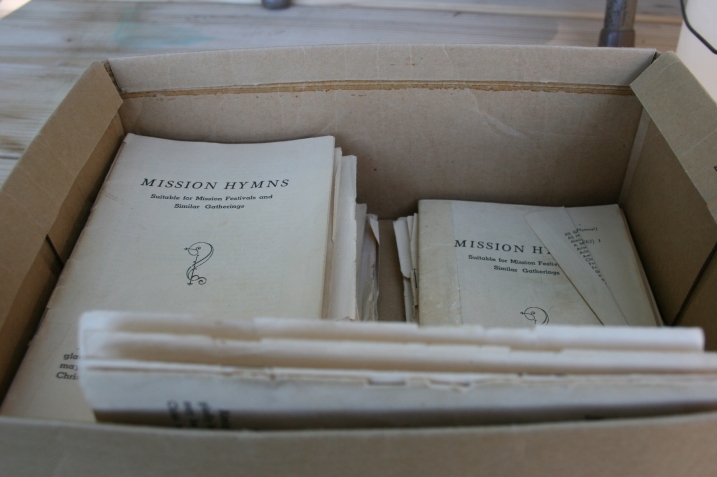 Vintage pocket-size songbooks were boxed and stashed on the stage behind the Freedom Band. The first hymn of the day was “Praise to the Lord, the Almighty.” At the end of the service these books, which have been used for decades, were collected.

Some of the music used by the Freedom Band was transposed decades ago from a hymnal. 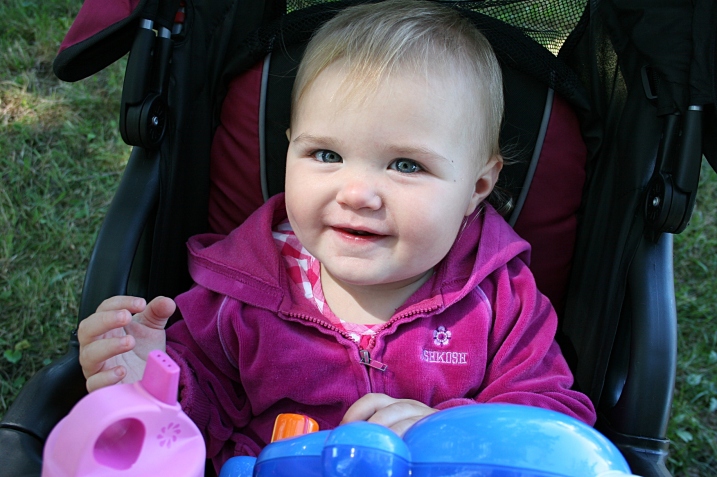 Ava, 15 months, hangs out at the pop and candy stand with her dad, Ben.

A 12-volt battery and converter amplifier powered the speaker system for the worship service.

Desserts, including coveted homemade blueberry pie, and an abundance of main dishes and salads lined makeshift tables (boards supported by sawhorses) at the potluck following the worship service. 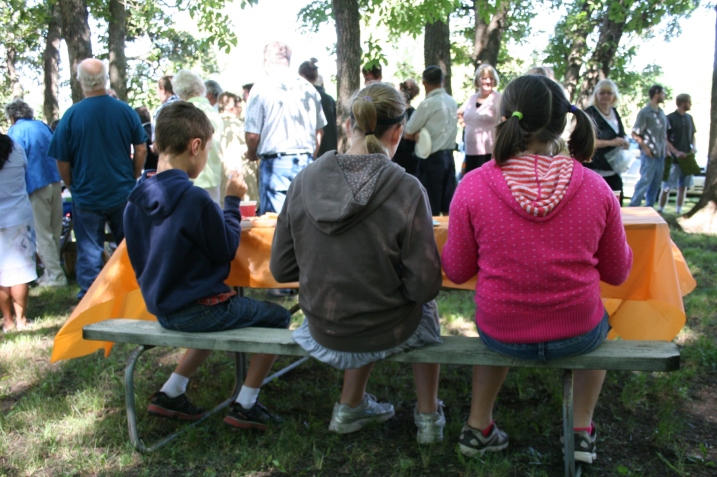 Enjoying the potluck dinner in Marquardt’s Grove while diners wait in line to dish up food. The vivid colors, the contrast of neon orange and hot pink, caught my visual interest as I captured this photo.

That’s exactly what you think it is, an outhouse in the woods, built from old barn boards. Follow the cow trail and you’re there. The outhouse is meticulously scrubbed every year before the mission fest. The grounds are also cleaned by volunteers who pick up the cow poop and sticks and then mow portions of the pasture as needed. Lynne Holst, wife of guest pastor, the Rev. Dr. Robert Holst, told my husband an interesting story about outhouses. When the Holst family served as missionaries in New Guinea from 1962 – 1968, Pastor Holst asked his wife what she wanted as a birthday gift one year. She thought, then replied, “A new outhouse.” She got her wish.