Attendees, including Linda Karkhoff (whom you will read about below) chat at a recent Cannon Valley Civil War Roundtable meeting in Faribault. And, yes, the guy on the right is wearing a Union cap. The display shows Karkhoff’s Civil War puzzle package.

MEMBERS OF THE CANNON VALLEY Civil War Roundtable, I’ve discovered, really know their history. They rattle off battlefields and battles, dates and names and other facts with convincing authority.

To be honest, I’m a bit intimidated by their knowledge. And I’ve told them so, even called them fanatics in a joking, but not unkind, way. That didn’t stop the club president from encouraging me to return to their monthly meetings. I’ve attended thrice during the past several years—when guest speakers’ topics especially interested me.

An 1840 Philadelphia Derringer, like the pistol used to assassinate President Abraham Lincoln, belongs to an area collector of Lincoln memorabilia.

First-time around, I listened to an area collector talk about some of the pieces in his collection of Abraham Lincoln memorabilia. That was in 2009 and I posted about it here. He asked for anonymity given the value of his collection. I thought it wise to honor his request. 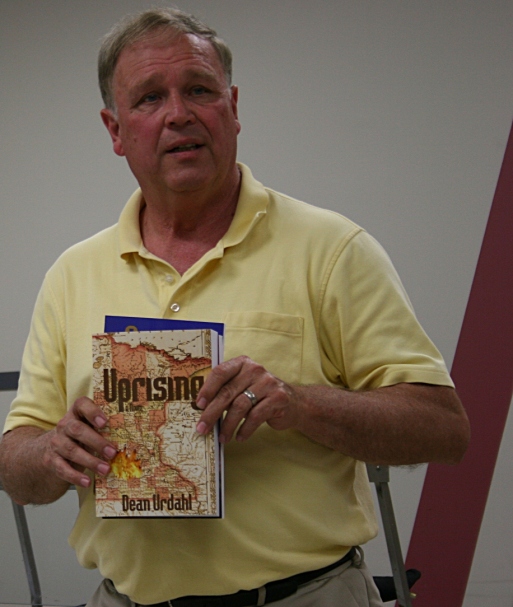 Dean Urdahl has written the trilogy of Uprising, Retribution and Pursuit.

This past May, I heard Minnesota State Representative Dean Urdahl, a retired American history teacher, writer and co-chair of the Minnesota Civil War Commemoration Task Force, speak about the U.S. Dakota-War of 1862 and his trilogy of historical fiction novels. (Click here to read a post from that event.)

And just recently, educational consultant Quintin Pettigrew read excerpts from A Personal Narrative of Indian Massacres 1862, the diary of Lake Shetek Massacre survivor Lavina Eastlick. I’ve since acquired a copy of that survivor’s diary and will post about it at a later date.

The photo shows the design of the puzzle Linda Karkhoff created as a commemorative piece for Wasioja Civil War Days. The puzzle honors the 2nd Minnesota Regiment, comprised of soldiers from southeastern Minnsota. Just note that lighting conditions were not good and I could not avoid glare reflected on the framed piece.

The 18 x 24-inch puzzle features, along with a U.S. map tracking the movement of the 2nd Minnesota, an imprint of a flag given to the regiment by the Loyal Ladies of the Louisville Soldiers Association.

Intrigued, I found an online copy of a letter presented to the Minnesotans along with that flag. Nanette B. Smith, president of the Loyal Ladies wrote:

Sir I transmit to you a Flag to be presented in the name of the Loyal Ladies of the Louisville Soldiers Association, to your Regiment, designed to commemorate the battle of Mill Spring 19th January, and as a testimonial of our appreciation of the participation of yourself and those under your command in the glorious victory of that day.

Each Regiment is equally entitled to like honor; but the gallant conduct of those who come from a distant State to unite in subduing our rebel invaders excite the warmest emotions of our hearts.

I offer to you our congratulations and my individual acknowledgements of the important service rendered to our State by your command.

Now puzzle designer Karkhoff, who is a carpenter by trade, did not read that letter to attendees at the Cannon Valley Civil War Roundtable meeting. But she did summarize that the Loyal Ladies’ flag was a thank you to the soldiers for pushing the Confederates out of Kentucky, thus saving Kentucky as a Union state.

She also shared that members of the 2nd Minnesota, comprised of soldiers from southeastern Minnesota, marched 6,000 miles—that’s walking—in four years. The unit’s drummer boy, she said, kept a diary, and survived the war. Such survival, she explained, was unheard of given drummer boys figurativley marched with targets on their backs.

This cloth bag holds the puzzle pieces and informational sheets.

You’ll find more information about the 2nd Minnesota, life as a Civil War soldier and the puzzle itself on informational sheets tucked inside the cloth bag holding Karkhoff’s puzzle. Even the bag is significant, similar to what a Civil War soldier would have carried for his tobacco and writing utensils, Karkhoff said.

A history buff, Karkhoff came up with the puzzle idea after she and several traveling friends discovered a lack of commemorative puzzles specific to an area or site they visited. She eventually formed Puzzled@ LLC and designed the 2nd Regiment puzzle.

The puzzle, she said, teaches history and geography and encourages teamwork, making it both educational and fun.

Now I’m one of those people who doesn’t care for puzzles. I’m too easily frustrated, don’t have the patience and, well, would rather read or write than puzzle over a jigsaw.

But for those of you who enjoy puzzles and/or are Civil War fanatics, and I mean that in a kind way, check out Puzzled@ by clicking here.

Puzzles may be purchased directly from Karkhoff (contact info is on her website; tell her I sent you); at Little Professor Book Center or the Steele County History Center in Owatonna; or at the Rice County Historical Society or Paradise Center for the Arts in Faribault.

BONUS: An exhibit, “Minnesota and the Civil War,” opens March 2 at the Minnesota History Center in St. Paul. Click here to learn more about this.