One child dies, another missing & a fireman injured in a farmhouse fire near my hometown December 5, 2013

I AM GRIEVING from a distance for two young children who apparently died in a house fire Wednesday afternoon near Lucan in my native southwestern Minnesota. The body of one child was recovered late Wednesday evening and one child remains missing.

The fire engulfed the home of Bernadette and Matt Thooft who escaped along with several of their children.

Bernadette Thooft poses for a photo in March 2013 in her general store.

I met the Thooft family last March in my hometown of Vesta, where Matt runs Matt’s Frame Repair and Bernadette operates a combination grocery and thrift store next door. I featured Bernadette’s new business, The Store, in a “Little General Store on the Prairie” blog post published March 27. (Click here to read.)

It’s not like I really knew the family in any great depth. But in the short time I spent with Bernadette, I learned enough to understand that this former daycare provider possesses a deep love for children. She and Matt had seven, ranging in age (in March) from not quite two to 11. They even built a hang-out space for the kids in a corner of The Store.

The Thoofts make a faith statement in this sign which points travelers along Minnesota Highway 19, left, to The Store and the Vesta Cafe.

Bernadette also possesses a deep faith and concern for others. This caring woman donates 10 percent of The Store proceeds to charity and established “Believe in the Backpack,” a backpack program for children in foster care. The Thoofts were former licensed foster care providers.

At the time of our interview, Bernadette fondly tagged her children “the hoodlums” in that kind and loving way that only a mom can.

It breaks my heart that this mother may have lost two of her children. It should be noted that authorities have not yet released information on the ages or identities of the children who did not escape the fire.

The Thoofts lived in a six-bedroom farmhouse on eight acres just 1.5 miles northeast of Lucan. They were in the process of trying to sell their property, according to information on The Store Facebook page. Plans were to relocate to my hometown of Vesta, seven miles to the north. 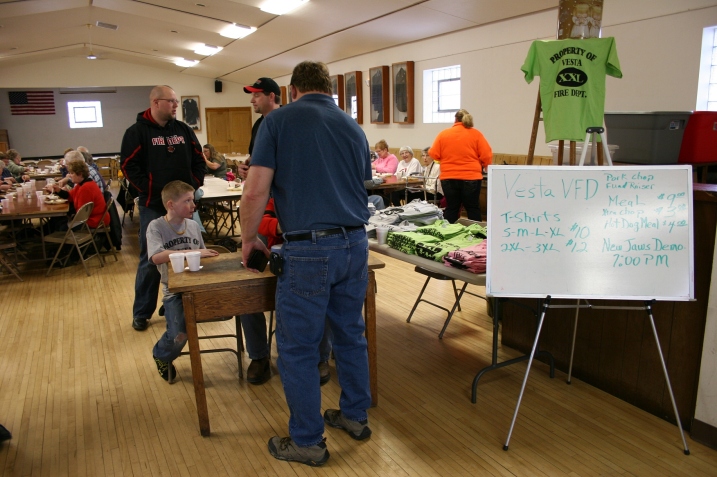 THEREIN LIES THE SECOND PORTION of this tragic story. Vesta firefighter Neal Hansen’s legs were run over by a fire truck after he slipped on ice, according to numerous news sources. He was severely injured and underwent surgery at a Mankato hospital. Initially, he was taken to the Redwood Falls Hospital, but could not be airlifted out because of high winds and snowy conditions at the time, KLGR radio reports.

If you wish to help with expenses for Neal and Tiffany Hansen, both volunteer EMTs for the Vesta First Responders and the parents of a 2-year-old son, please click here and donate through the Hansens’ Giveforward page. By 8 p.m. Thursday, 75 donors had contributed $3,685 to the fund, surpassing the $3,000 goal.

Contributors Ryan and Christie Rudenick commented on the Giveforward page:

Thank you and to all the volunteer firemen, in small, tight knit communities like we have it is even harder to be on call and see horrific things happen to our friends and communities–you and all firemen are heroes!

Vesta volunteer firemen remove the windshield from a junk car during a Jaws of Life demonstration in March of 2013 in my hometown of Vesta.

I ditto the Rudenicks’ “thank you.” With extended family members on two of the volunteer fire departments called to the Lucan farmhouse fire, I have a personal connection to these firefighters. My 29-year-old nephew, Adam, a father and elementary school teacher, responded to the fire with the Walnut Grove Fire Department.

Last winter I met several other Vesta firemen while attending a fire department fundraiser. You can click here to read that post.

Imagine the emotional impact this fatal fire is having on these volunteer firefighters from eight communities.

I know that the residents of Vesta and Lucan and surrounding areas will rally to assist the Hansen and Thooft families via prayer, emotional support, financial help and community benefit fundraisers. I’ll update you if a benefit is established for the Thoofts. Nothing beats the neighborly care found within small towns like Vesta, population 320, and Lucan, population 190.

This is not the first time the Thooft family has faced difficulties. In April 2008, the Thoofts’ then 6-year-old son, Zachary, was struck by a school bus after being dropped off at his rural home, according to an article in The Marshall Independent. He recovered from those injuries.

And now this, this deadly fire at their home…

24 Responses to “One child dies, another missing & a fireman injured in a farmhouse fire near my hometown”