Looking out for the Girl Scouts in frigid Fargo March 15, 2014

SHOULD WALMART ALLOW Girl Scouts inside their stores to sell cookies?

A West Fargo, N.D., man thinks the retail giant should show a little compassion and do exactly that, according to an article published Thursday in The Forum of Fargo-Moorhead.

The entry to the West Fargo Walmart, photographed on a Sunday morning in November 2012.

John Kraft raised his concerns in a newspaper ad after observing local Girl Scouts selling cookies outside of Walmart in temps that dipped near double-digits below zero with an equally brutal windchill. 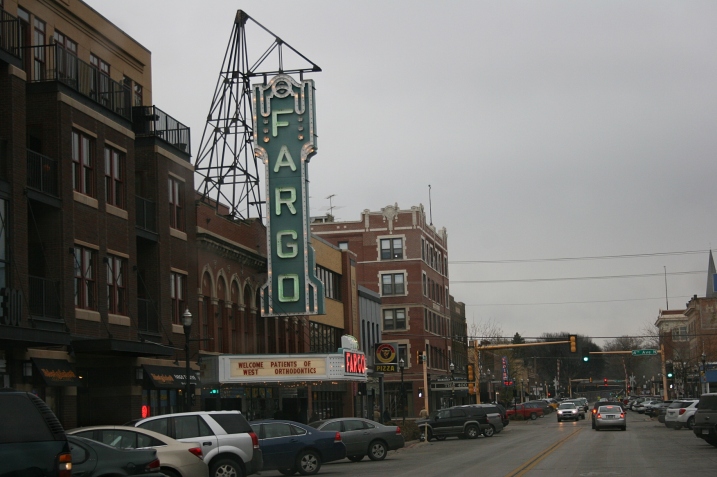 Believe me, the wind whips across the flat terrain of Fargo. In all seasons.

Last February I received this text from my 19-year-old son, a then student at North Dakota State University: This cheap Walmart hat stands zero chance against the Fargo wind. He proceeded to order a surplus Russian military cap online. His observation seems especially fitting in the current context of the Girl Scouts-Walmart controversy.

Me, dressed to ring bells for the Salvation Army.

Several months ago, I stood outside the Faribault Walmart, ringing bells for two hours for the Salvation Army in zero degree temps. Layered in a flannel shirt, jeans, insulated coveralls and a sweatshirt with my feet tucked inside wool socks in insulated boots and my hands shoved inside fleece-lined mittens, I still shivered. So I understand the Girl Scouts’ situation. They reportedly sold cookies for six hours in the frigid cold, four hours longer than my volunteer stint.

I managed the cold by staying in constant motion and occasionally stepping inside Walmart to warm my hands under the bathroom hand dryer.

Like John Kraft in West Fargo, I wondered why my husband and I and the other volunteers ringing bells on that cold cold Minnesota day could not at least stand inside the Walmart vestibule. Company policy, we were advised. Company policy.

It seems to me that sometimes common sense should prevail over policy.

In March 2011, I photographed these Girl Scouts selling cookies from a truck along U.S. Highway 14 in Courtland, Minnesota. Temps hovered around 30 degrees that afternoon. Girl Scouts seem determined to sell cookies, no matter the weather.