SHELTERED INSIDE THE HOSPITALITY and bar area under the grandstand of Elko Speedway, I watched the storm move in, trees swaying, rain rushing race fans indoors.

After the early evening rain, fans began filing into the grandstand.

My husband and I had just arrived at this south metro speedway and settled inside with an evening meal, compliments of NAPA Auto Parts (Randy’s employer), when the rain arrived. I was thankful to be warm and dry, awaiting the now delayed start of the NAPA sponsored 6th annual Thunderstruck 93/11th annual Thunder Car Nationals races.

I was clueless as to the meaning of Thunderstruck and Thunder Car then and still am now. I’m not a racing enthusiast. But, given our evening out was free and I’d been to the races here only once, and years ago, I was game. 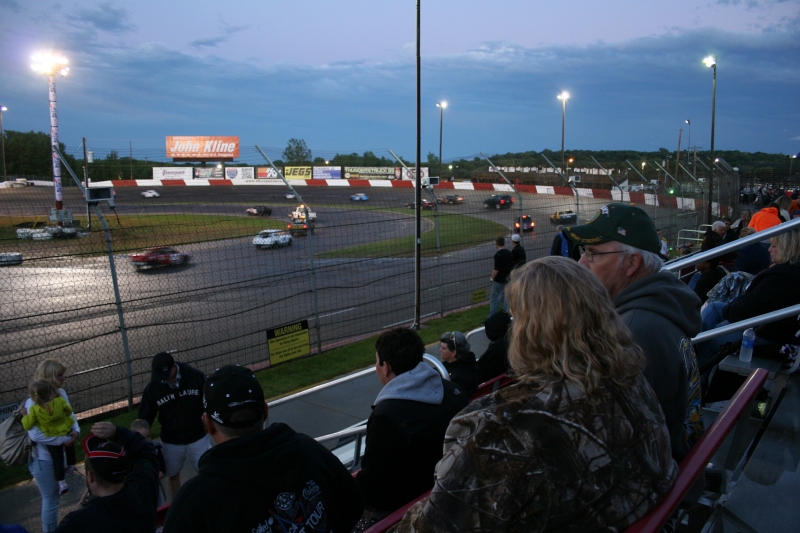 Now I remember why I haven’t been here in a long time. Racing is not my thing, especially when sitting on wet bleachers, a cold wind slicing across the speedway with the temp hovering in the high 50s. We could see our breaths. I shivered and pulled myself as deep inside my hooded sweatshirt as possible. In short, I was miserable. And I suppose that was partially my fault for failing to realize the temperature would plummet following the rain. 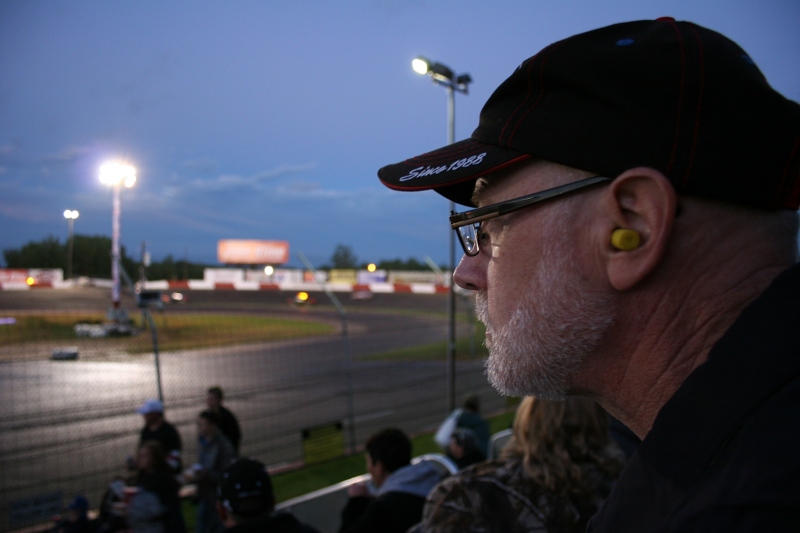 My husband enjoys racing. At least we remembered to bring ear plugs.

We watched four races, their start delayed by the wet track, before I semi pleaded with my husband to leave. And we did, at 9 p.m., long before the end of the races and the evening fireworks display and the ice bucket challenge to raise monies for ALS research. 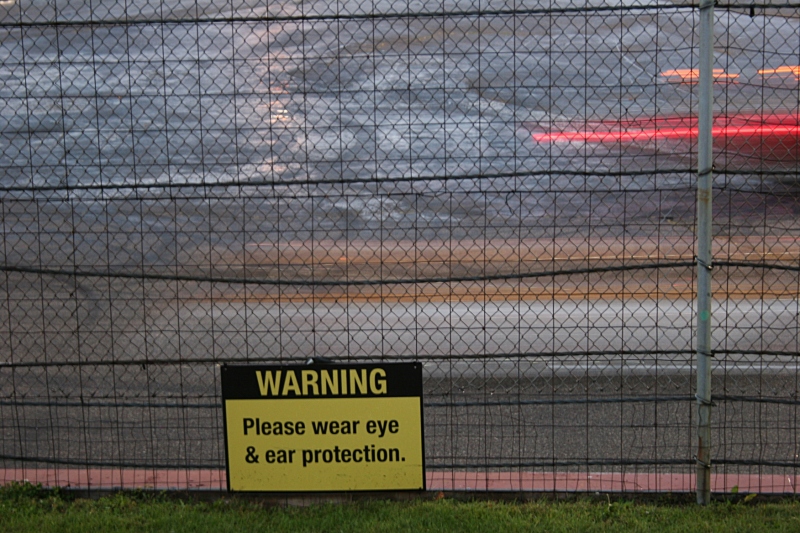 Ear plugs or muffs are a must to protect your hearing.

All the while there, I attempted to interest myself in the speeding cars circling the track. I just could not get into the races.

Instead, I focused on the people: 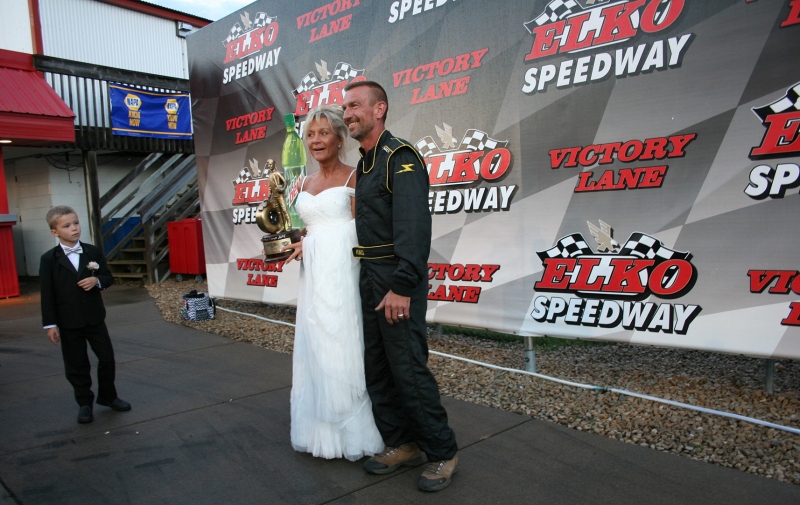 The ring bearer danced and stood by as the couple, married at Elko Speedway, was photographed. 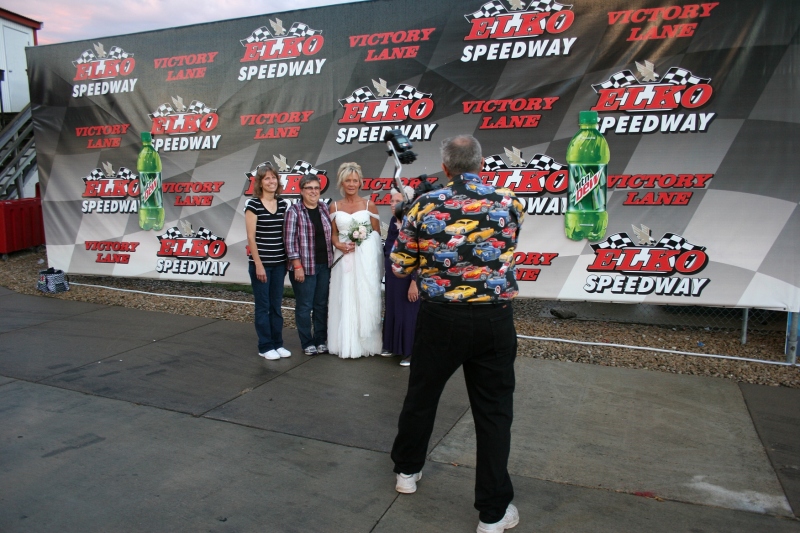 I was as much interested in the bride as the shirt worn by the professional photographer.

the couple married at the speedway where the groom raced;

The ring bearer was especially interested in the NAPA truck. He tried the door and peered inside.

the dancing ring bearer with the black and white checkered pillow, preschoolers clamped in sound-deadening ear muffs; a newbornish baby folded inside fleece; the woman in front of me easing into a second sweatshirt;

A quick shot of the Elko mascot.

And I wondered, how can you drink beer on an evening as blasted cold as this? 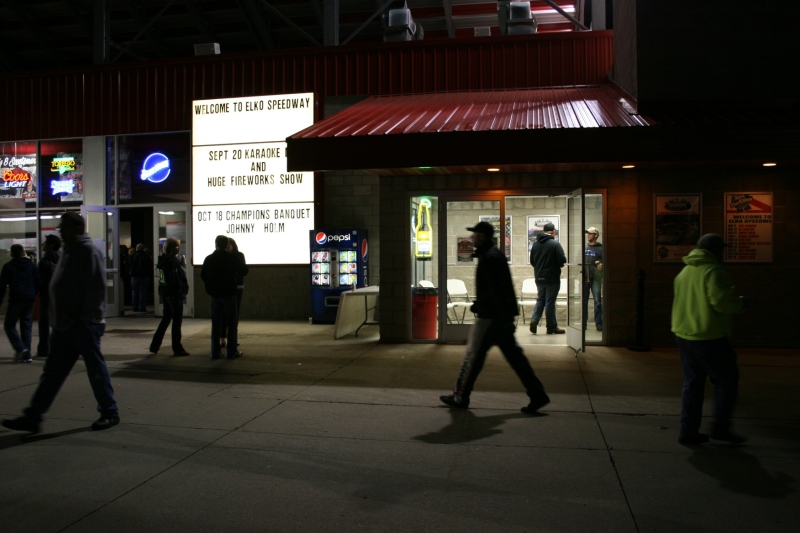 Musical entertainment is also sometimes part of the racing entertainment package. Champions Drive-In Theater is located on the speedway grounds, too, for outdoor movie showings.

And I wondered why I was there, getting kicked in the butt by the guy behind me (no apology), sitting on rain-puddled bleachers, leaning into my husband for warmth, shivering and then shivering some more. 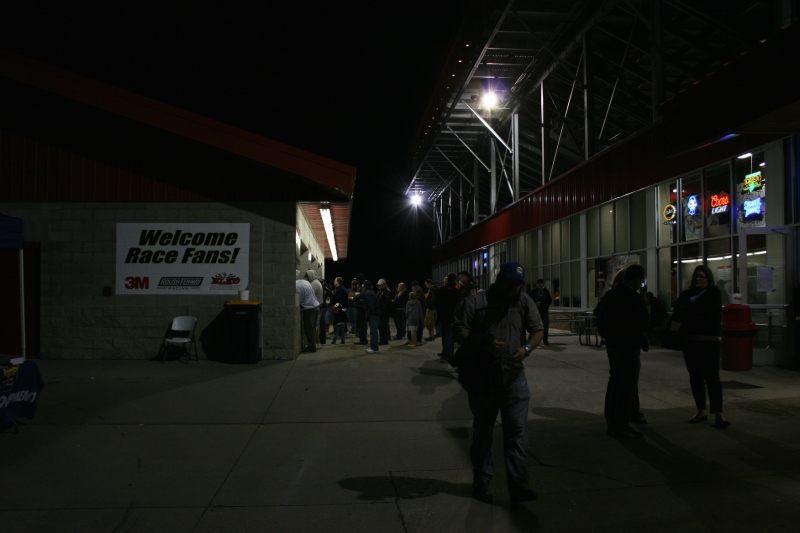 Fans waited in lines at the concession stand, left. To the right is the bar and hospitality area under the grandstand.

For awhile it worked, this attempted diversion. When we finally exited the grandstand, warmth began returning to my too still too long body. We paused to warm ourselves at a campfire, a nice feature at this speedway. The facilities, although I have nothing with which to compare them, seem top-notch. Lines were long, though, at the concession stand.

Lots of racing merchandise inside the Speed Zone.

We ducked inside the Speed Zone. Race fans packed this building crammed with racing merchandise. My husband spotted a $60 Elko Speedway sweatshirt. “You could have bought one of these,” he suggested. A little too late. Not that I would have purchased a racing sweatshirt anyway, but it would have cut the cold of a bone-chilling evening at the racetrack. 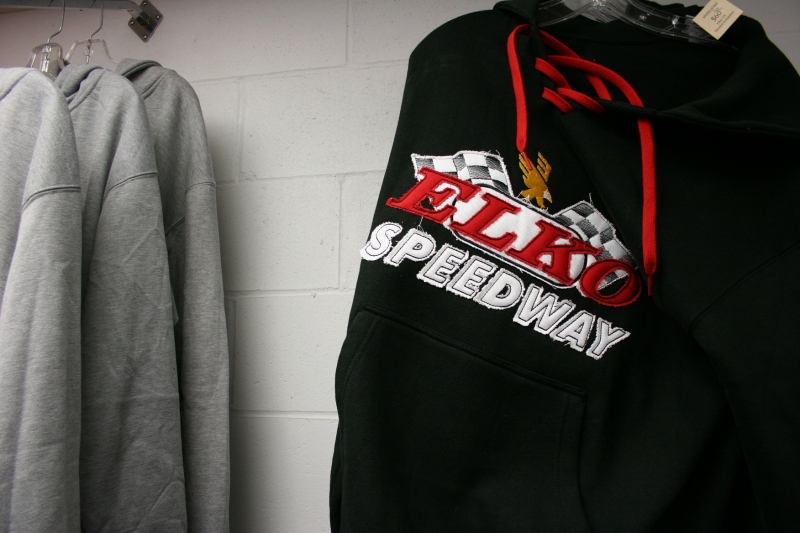 Sweatshirts were the attire of choice Saturday evening. for those fans smart enough to wear them to the track or purchase them at Speed Zone.

HOW ABOUT YOU? Have you ever been to car races? Are you a fan? Or are you, like me, simply unable to interest yourself in cars that circle round and round a track? Perhaps I need to give racing one more try, on a warm and sunny summer evening…