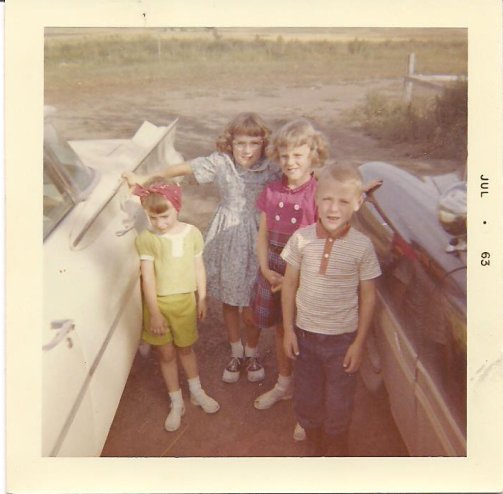 IN THE PHOTO, one of the few from his childhood, he is a slim blonde-haired almost 7-year-old standing in front of three of his four sisters.

Fast forward 53 years and he is a 60-year-old father of three and a new grandfather. He is my husband, Randy. And today he turns sixty.

We’ve known each other for more than half our lives. I often wonder how those decades have passed, snap, just like that and we are each now sixty.

Birthdays for me today are more reflective and less celebratory. Not that I don’t appreciate another year of life. Rather, I find myself thinking about the past.

I have heard through the decades stories from Randy’s past. He was born in North Dakota and moved with his family to central Minnesota in his early elementary years. As he tells it, in the one-room country schoolhouse he attended in North Dakota, students were kept in from recess one day due to coyotes roaming the schoolyard. I love that story.

While attending a Catholic school in Minnesota, he apparently misbehaved and was punished by a nun drilling her thumb into his skull. I don’t love that story.

And then there’s the story about the day my husband saved his father’s life. On Saturday, October 21, 1967, my father-in-law’s left hand was pulled into the spring-loaded roller of a corn chopper. Blades sliced off his fingers. The roller trapped his arm. Randy was with him. As his father screamed, the 11-year-old disengaged the power take-off and then ran along cow pasture and across swampland to a neighbor’s farm for help. Randy saved his dad’s life. I love that example of courage and calm exhibited by a young boy, my husband.

That trait of quiet, reassuring strength has continued throughout Randy’s life. Not much rattles him. It’s an admirable quality, especially in times of stress and difficulty. And, as we all know, life brings many struggles and challenges.

He is strong. Strong in his work ethic, his faith and his love of family.

Today I celebrate and honor the man I’ve loved for some 35 years. Happy birthday, Randy! And many more!

37 Responses to “Reflecting on my husband’s 60th birthday”