TODAY AND TOMORROW, two of my three children turn another year older.

Now that they are adults (the daughter an hour away, the son in Boston), birthday celebrations have changed. I will celebrate belatedly with Amber by babysitting my 10-month-old granddaughter while she and her husband dine out. We’ll have a chocolate tofu pie upon their return, my contribution to the mini party.

As for Caleb, I hope to connect with him via Skype or a phone call. He’s young and single, less inclined to understand the need his mother has to talk to him on his birthday. At his early twenties age, friends take priority. No surprise there. I was once young.

Not that I was a young mother. I wasn’t, having given birth to my first daughter at age 29 ½ and to my son eight years later with another daughter in between.

Motherhood shifts behavior and thoughts to a primeval need to nurture, protect and love our children. And as the years pass, that never changes. 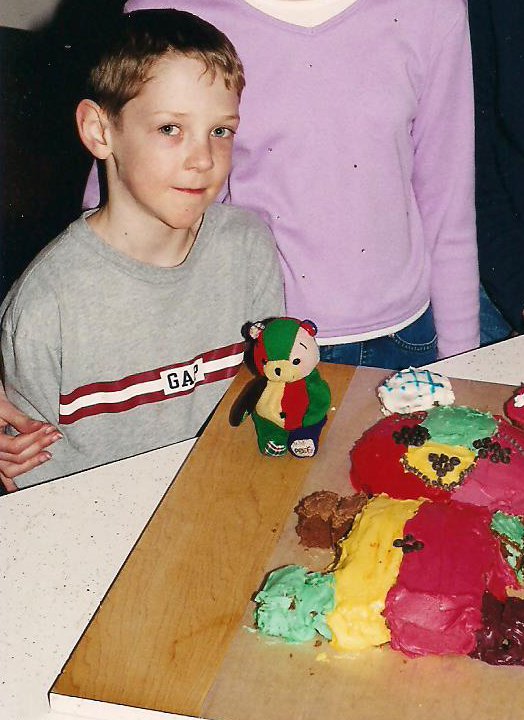 For his eighth birthday, Caleb’s sisters created a PEEF cake for their brother.

My children’s birthdays bring now a certain melancholy in that I miss them and birthday dinners out followed by the ritual of singing “Happy Birthday!” and then eating the homemade dessert of their choice, not always cake.

But this is the logical progression of parenthood—this move of our children toward independence, beginning at birth.

Today and tomorrow, I will honor my youngest and my oldest by thinking of them, their lives and the blessings they have given me as their mother. I love them deeper than the ocean, higher than the skies. I will always love them and encourage them. They are of me and that connection binds us always on their birthdays.