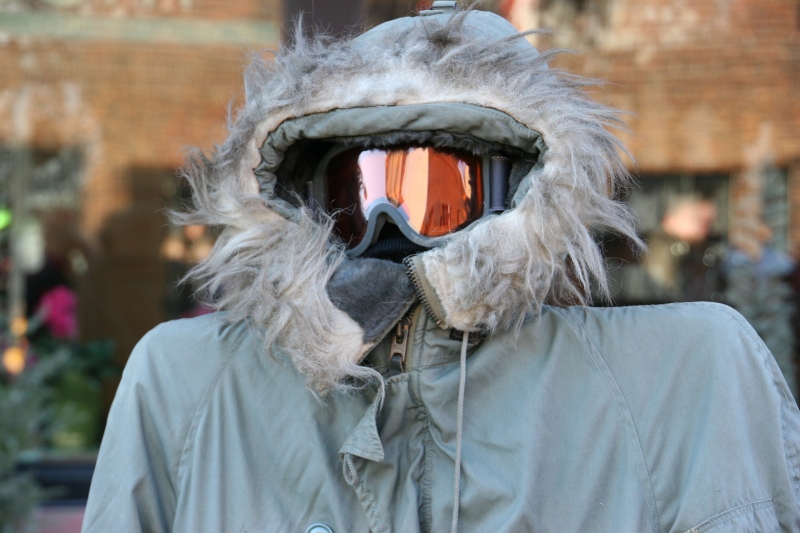 Staying warm trumps fashion during a Minnesota winter. This vintage parka accented snowmobiles on display at Sleds on Central in historic downtown Faribault.

MY TIME SNOWMOBILING, even though I’m a life-long Minnesotan, is limited to several ride-alongs as a teenager. I never had that much interest in the sport. Either you’re really into snowmobiling or you’re not. That’s my assessment anyway. 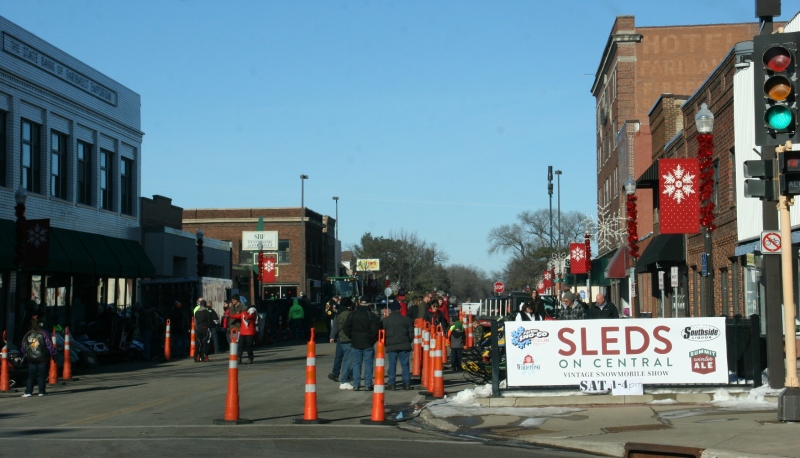 Even with that minimal interest, I still wanted to check out Sleds on Central, Vintage Snowmobile Show, this past Saturday as part of Faribault’s second annual Winterfest. 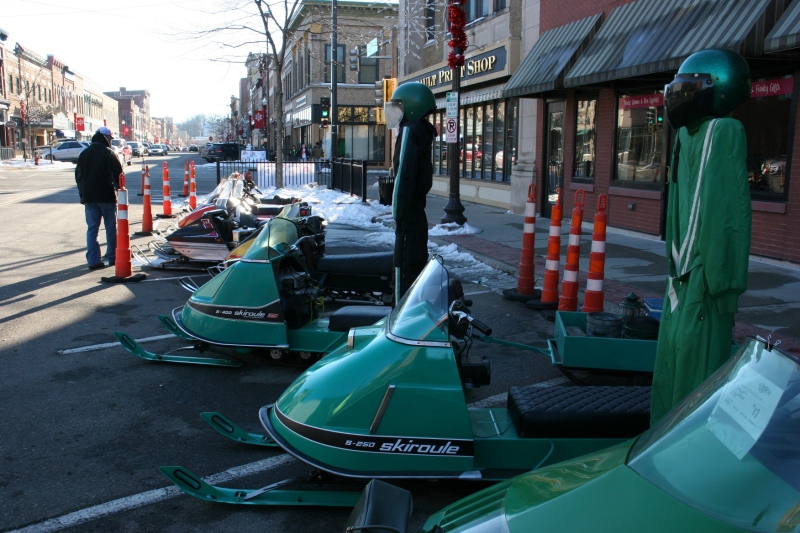 Once there, I focused initially on keeping my 2 ½-year-old granddaughter safe after a pick-up truck unexpectedly drove through what I thought was a closed street. Alright then. I was tempted to move orange safety cones into the traffic lanes of Central Avenue to keep vehicles out.

Instead, I steered Izzy to two pink snowmobiles. She loves anything pink. That distraction worked briefly. 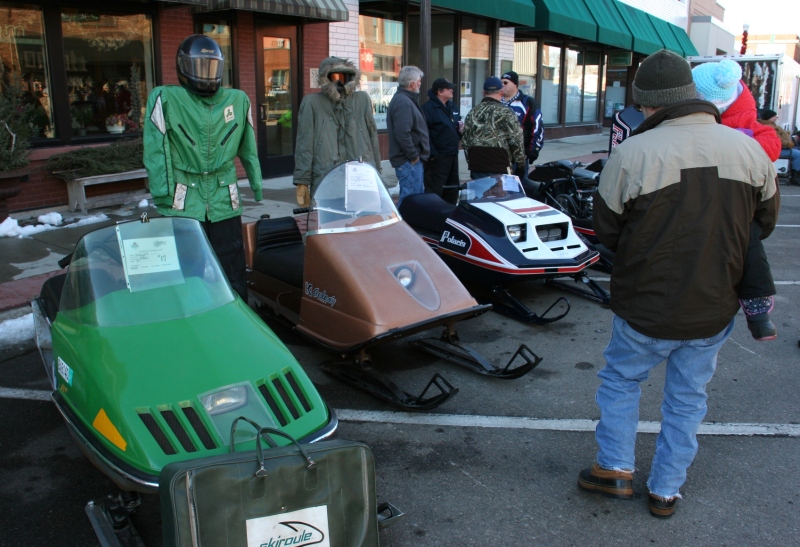 Then Grandpa scooped her up… 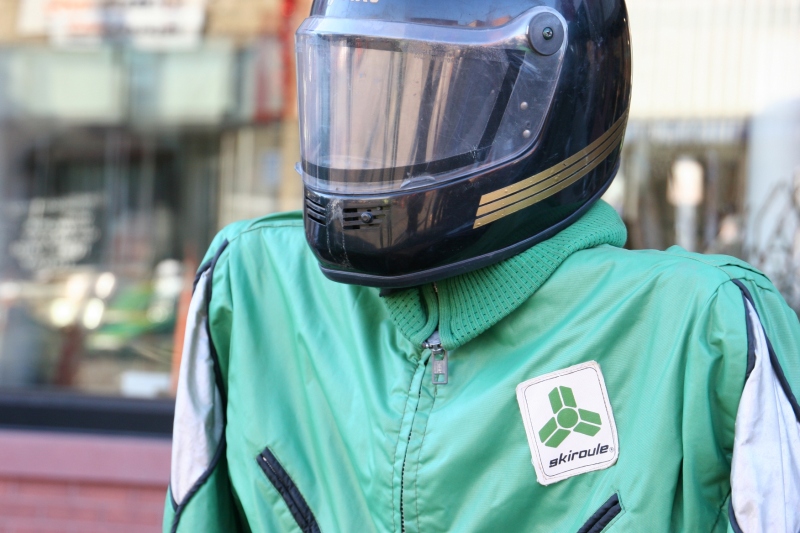 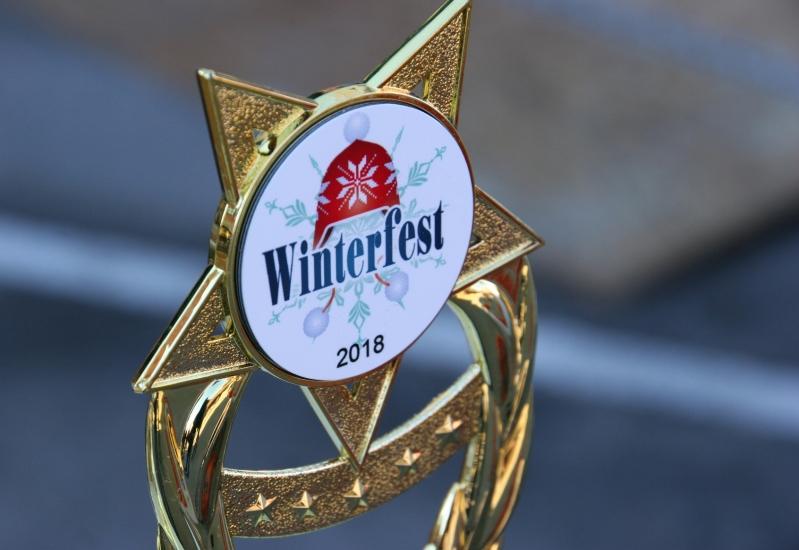 so I could take photos without that traffic worry.

I don’t really know much about snowmobiles, just that they can go fast, make lots of noise and break down. An avid snowmobiler would likely emphasize the positives of speed, the outdoors and winter fun.

Polaris snowmobiles are signature Minnesotan. The company opened in the 1950s in Roseau in far northwestern Minnesota.

I recall some fun rides with my cousin Kevin as he raced across the flat farm fields of southwestern Minnesota. But I also recall the not-so-fun time my older brother invited me to hop on his snowmobile for a ride across the field to the gravel pit on our family farm. Doug stopped in the pit and somehow persuaded me to get off. Then he left. Just drove away. I’ll never forget that moment of watching him speed away as I stood there in the deep snow in the cold of winter with no way back to the farm site. He must have picked me up eventually. But that abandonment is seared into my memory. I’d never trust him again on a snowmobile.

TELL ME: Are you a snowmobiler or have you ridden on one?