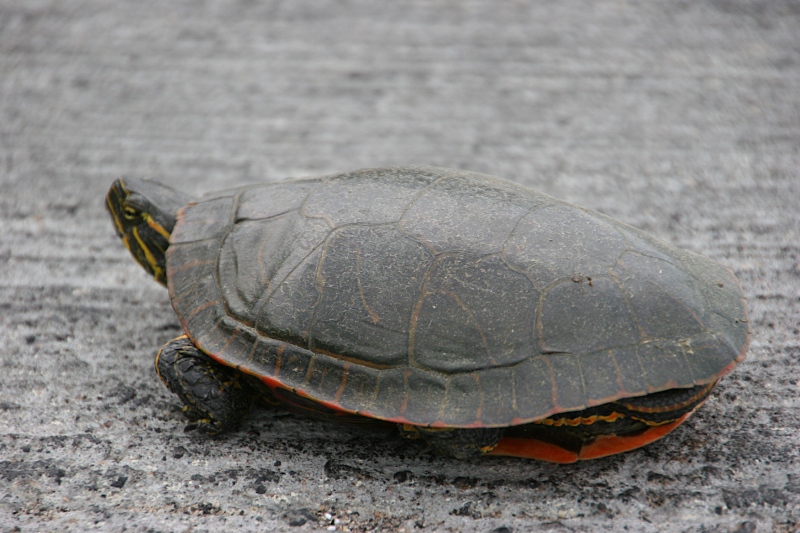 A turtle spotted recently on a street in northwest Faribault.

YOU KNOW HOW, SOMETIMES, something sparks a memory. Or memories. Turtles do that for me. 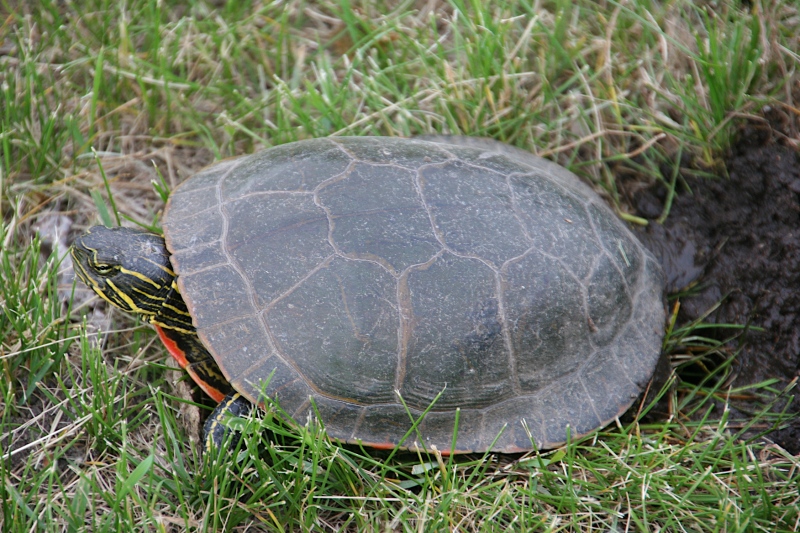 I spotted another turtle in the grass at North Alexander Park in Faribault. The Cannon River flows through this park.

Recent sightings of turtles at three locations in Faribault took me back in time. To my youth and the “dime store.” Remember those? The long ago chain variety stores like Ben Franklin and Woolworth’s, precursors of today’s dollar stores.

Anyway, Woolworth’s in Redwood Falls, 20 miles from my childhood home in southwestern Minnesota, featured a small pet section tucked in a far back corner of the store. And the sole “pet” I remember, because I really really really wanted one, were the mini turtles. Probably imported. My sensible manager of a brood of six farm-raised kids mother never caved to my pleas. She was smart.

My other childhood memory is of tortoises. Not quite turtles, tortoises are big, with rounded shells, and spend most of their time on land. Turtles are much smaller, flatter and prefer water to land. I never saw a single turtle (outside of Woolworth’s) or tortoise in southwestern Minnesota. Rather, I encountered my first tortoise at the Como Park Zoo in St. Paul. I went on an elementary school class trip there once—a rather big deal to go to “the Cities” when you’re a farm kid. I remember the free-range, lumbering tortoises there and the Sparky the Seal Show.

Fast forward decades later to motherhood and the birth of my two daughters in the late 1980s. They soon became fans of “The Teenage Mutant Ninja Turtles.” Saturday morning cartoons and action figurines of the masked turtles and phrases like “Cowabunga!” and “Heroes in a half shell, turtle power!” were parts of their routine and vocabulary. One of the daughters even had a turtle birthday cake one year although I don’t recall which turtle—Leonardo, Donatello, Michelangelo or Raphael. 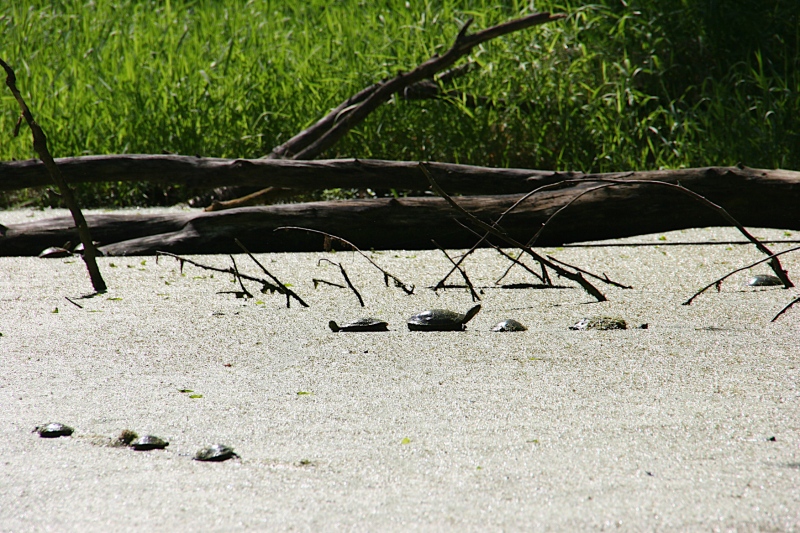 Turtles basked in the sun in the Turtle Pond at River Bend Nature Center on a recent Friday afternoon.

I expect if Woolworth’s sold tiny turtles at the time, my daughters would have begged for one. Instead, I bought them each a goldfish from the “dime store,” still open in downtown Faribault when the girls were young. 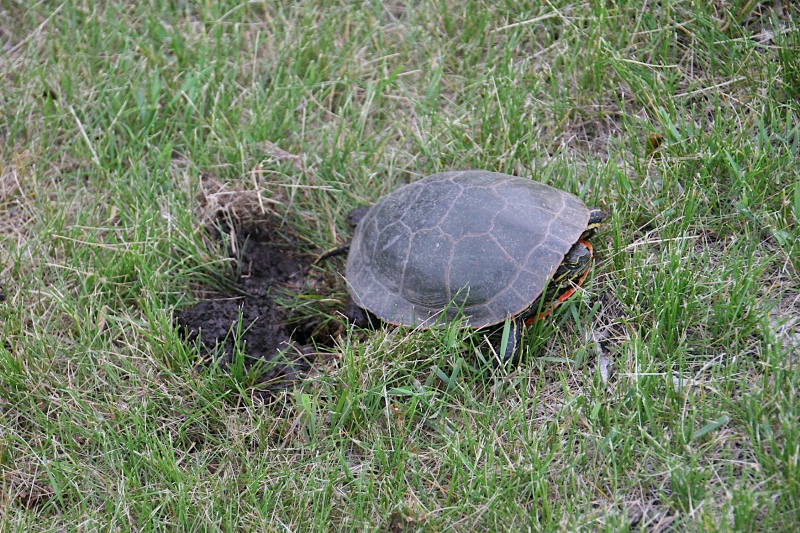 This turtle at North Alexander Park was digging in the grass, apparently trying to create a nest.

That takes me to my final story. On a summer afternoon when my second daughter was still in high school, or maybe college (details of time elude me), I glanced out the window to see a tortoise on our driveway. Now we don’t live anywhere near Como Zoo. But we had a neighbor who owned a tortoise and lived across our very busy street. To this day, I have no idea how that tortoise survived crossing through all that traffic. But I wanted the beast off my property. Before I could determine how we would manage that, Miranda picked up the tortoise and carried it back home. With me protesting. I had no idea whether the tortoise would turn on her, or how sharp its teeth or… 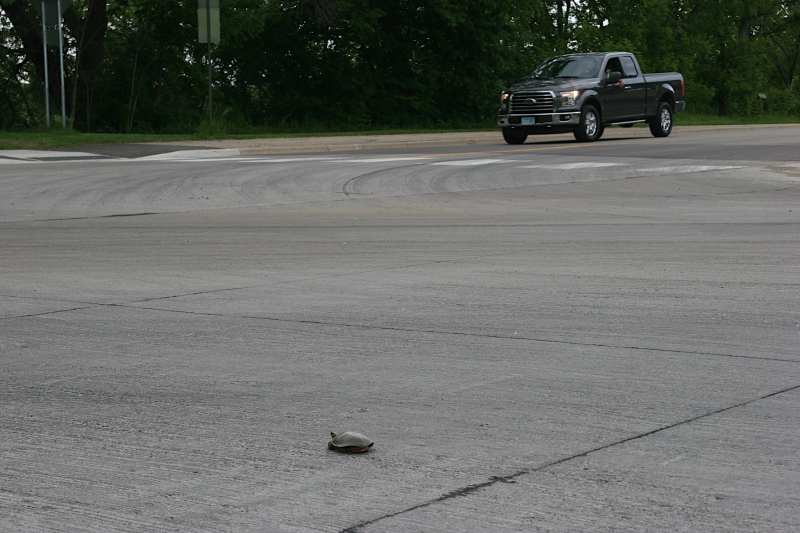 This turtle looks so small on a Faribault roadway as it moves toward a nearby pond.

This time of year, turtles are crossing roads in Minnesota, mostly to access familiar nesting locations apparently. While some people will stop to pick up and move a turtle out of traffic, I won’t. I’ll only stop to photograph, if it’s safe to do so and traffic is minimal. I’m smart like my mom and not nearly as brave as my second daughter.