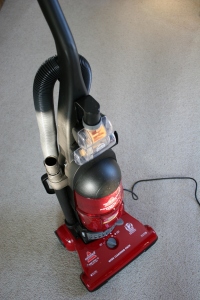 My new Bissell PowerForce Turbo vacuum cleaner replaces the General Electric vacuum I bought 8 1/2 years ago. The switch wore out on that 2002 vacuum just days before I was going to give the cleaner to my daughter for her new apartment.

YOU WOULD THINK that buying a vacuum cleaner should be easy, right? Not.

Faced with more than a dozen choices lining two sides of a big box store display aisle, I was overwhelmed by the selection—Eureka, Bissell, Dirt Devil, Hoover…

Not only did I have numerous brands from which to choose, but each company also offered high-end, low-end and in-between models.

And then the powerful force of name branding—tornado, wind tunnel, PowerForce—sucked me into the vortex of consumer confusion.

How would I ever decide which vacuum cleaner would pull the most dirt from my carpet?

OK, what did I want in a vacuum cleaner? Powerful suction. Adjustable height. Accessory tools. A bagless system. Filters that don’t cost a fortune. Sturdiness. Affordability.

As my husband and I began perusing the choices, I/we became more confused.

Then…, thankfully, an associate came to our rescue, told us the cheapest models were “crap” and wouldn’t last a month, that some consumers buy the $400 models (“but why?”) and that the bestsellers are Bissells, the vacuum he owns.

With that advice and his directive to consider the $69.94 (why can’t they just say $70?) Bissell PowerForce Turbo bagless vacuum stacked on the end cap, I felt like the swirling winds of too many choices were finally subsiding.

He gave us some additional money-saving advice. Rather than replace the foam filter, simply blow out the dirt and dust with an air compressor. Been there, done that, but still a solid tip for a shopper who may not have considered this option.

This associate was certainly impressing me with his knowledge and his honesty.

Then, he clinched the sale by telling us to keep the receipt and the box, and “if you’re not happy, you can return the vacuum,” honoring the store’s 100 percent customer satisfaction policy. “You wouldn’t believe the dirty vacuum cleaners that come back.”

I don’t know if it was the look of surprise on my face or what, but he then shared several more stories about returned merchandise that, to me, qualify as theft and I told him so. He didn’t disagree with my judgement.

A customer once returned motor oil that was clearly old oil drained from a vehicle, he said.

Consumers routinely return specially-mixed paint because the color isn’t right (didn’t know you could do that, I thought).

But the worst abuse of the retailer’s return policy this associate has seen occurred when a man returned a dirty, worn-out power sander that was a decade old.

“You took it back?” I asked, incredulous.

“He had the box and the receipt. What could we do?” he responded.

The company, he says, loses millions nationwide annually due to such merchandise returns.

And who pays for that? Consumers who purchase $400 vacuum cleaners? Or those of us who buy $69.94 vacuums?