Belview area residents and others gathered at a city park on Sunday to mark the one-year anniversary of an EF-1 tornado.

A YEAR TO THE DATE after an EF-1 tornado swept into the southwestern Minnesota prairie town of Belview, population 375, folks gathered in the late afternoon and early evening hours of an oppressively hot and humid Sunday to remember and to celebrate. 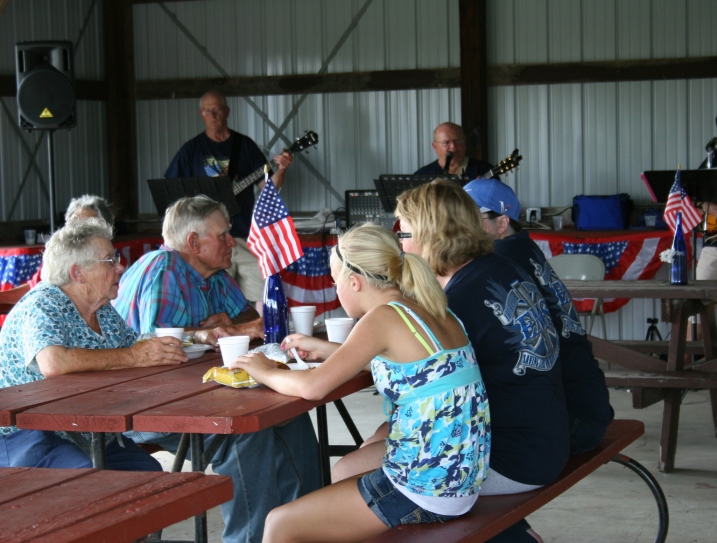 Food and music were part of the celebration.

They celebrated with a catered picnic meal and music right after a brief rain shower passed through town.

They remembered with photos and stories shared.

Ingrid Huseby, left, and Linda Sullivan. Yes, the t-shirts mean exactly what you think they mean.

“We were lucky. It could have been so much worse,” Belview resident Linda Sullivan said as we stood in the shade of the Belview City Park shelterhouse after I’d snapped a photo of her and Ingrid Huseby in commemorative, make-a-statement Belview tornado t-shirts printed shortly after the July 1, 2011 storm. “I can’t believe that nobody was hurt; that was the miracle.”

Linda’s right. It is a miracle. And you believe it when you hear stories like that of two women who rode out the 95-115 mph tornadic winds in a car just outside of town; of the couple who did not make it to their storm shelter, upon which a tree then fell; of the Iowa man and his son who sought shelter at the bank when they drove into town in the middle of the tornado; of the natural gas leak at a home…

“Like I said, it could have been so much worse,” Linda repeated several times as we moved into the shelterhouse to view an album of photos showing the damage at her home. She lost 11 trees.

It is Belview’s trees which are undeniably this prairie town’s most devastating loss.

Says City Clerk Lori Ryer. “We lost 70 percent or more of our trees.” In the park alone, where residents were celebrating on Sunday, 70 trees were lost. 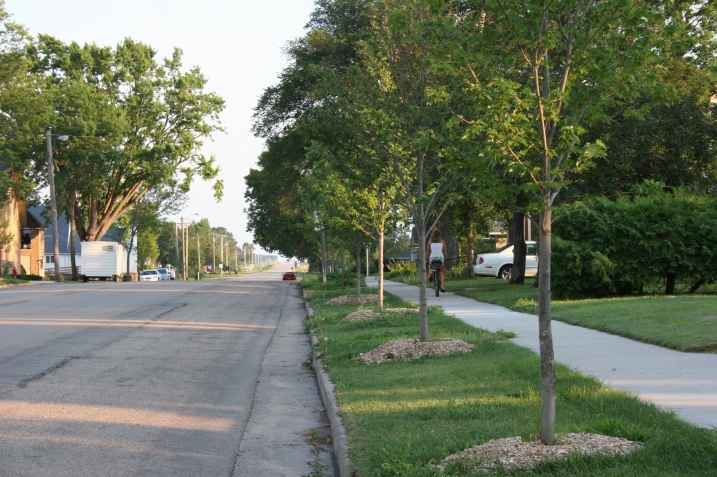 New trees line the boulevard along Belview’s Main Street. A Belview native who owns a tree business offered the city a discounted price on trees. Tree replacement is not covered by FEMA or city insurance.

But already, this community is replacing its trees—57 in the Belview City Cemetery on the edge of town; many along the Main Street boulevard; and others planted at private residences throughout Belview, including peach, pear, apricot and apple trees in Linda Sullivan’s yard.

Linda, who was out of town when the storm rolled in, remembers the phone call from her brother, “You can’t find the house for the trees.”

And it was like that all over town with trees or tree branches lying atop houses, garages and vehicles and blocking streets.

In that environment, Belview’s volunteer fire department and emergency personnel responded as they drove a fire rig around town checking on the safety of their friends, neighbors and families.

Lori, the city clerk, praises those volunteers and the many others who came into town to help with recovery. Within two days of the tornado, Linda Sullivan’s property was cleaned up. It was like that all over town as a continual procession of vehicles hauled away downed limbs and trees.

A tornado-ravaged tree stands at the Belview Area Learning Center one year after the tornado.

Today visual reminders of the tornado remain in ravaged trees, in houses still under repair, in the rows of new trees spaded in and now growing along the Main Street boulevard.

But it is a community which has weathered the storm and which seems even stronger today for having experienced an EF-1 tornado.

Belview is the type of small Minnesota town where kids can just drop their bikes and scooters, unlocked, in the park.

The Belview Fire Department filled a temporary water reservoir for the kids to splash in during the tornado recovery celebration on a sultry July 1.

A SPECIAL FED-EX SHIPMENT arrived from California on Friday for the residents of Belview. It came from Steve, the Federal Emergency Management Agency representative assigned to Redwood County. “He loved Belview,” City Clerk Lori Ryer said. “He’d never been to an area with such a hometown feel like here.” Steve was even invited to Thanksgiving dinner at the home of Delhi Township Board member Tom Werner.

The tiny sequoia photographed here was given to the residents of Belview by their FEMA rep, Steve. Photos of tornado damage and recovery were posted on bulletin boards during the celebration. The image in the upper left corner shows the tornado, as it approached Belview.

The FEMA’s rep’s fondness for Belview showed in the sequoia he sent with the following note:

Some of you I was able to meet personally, with others it was a smile or head nod. In either respect, the experience of working with you during the tornado recovery effort has been engraved in my memory banks. What a fantastic town and great people.

Thank You for the invitation to the one year recovery celebration and tree planting. Believe me I’d very much like to be there, however FEMA wants me here, in New York City, until our mission is completed. Yeah, I know what you’re thinking. New York City??????

I hope you can find a nice place to plant this “little guy”–you might consider giving him a little room to grow. They live in the mountains near my home in California and I can tell you that every time you see one it will certainly take your breath away, they are truly magnificent trees and very hard to forget. Somewhat like the Harvest and Thanksgiving Time in Minnesota.

Wishing you all continued success in the recovery process.

Decades from now, when travelers spy a giant redwood in the Redwood County community of Belview, they will likely ask about the tree. And they will hear the story of the tornado which touched down in this little prairie town on July 1, 2011, and how, one year later, Steve the FEMA rep gifted a sequoia to the city. Surely, the stuff of legends…

“WE’RE ALL REDNECKS,” she says.

But she doesn’t mean the term in a negative way. Rather Tracy Yennie implies that she and her neighbors in flood-ravaged Zumbro Falls are hard-scrabble, independent folks who are determined to stay put.

“The whole town is awesome. Everybody knows everybody,” says Yennie, who’s called this place home all 31 years of her life. Up until the September 23/24 floods, she and her family lived in a house several hundred yards from the Zumbro River along “the river road,” Wabasha County Road 68, just outside of town.

Since the flood deposited four feet of mud and cinder block in her basement leaving her home uninhabitable, she’s been camping—in a shed on her property—and waiting on FEMA. “They’re just dragging their feet. They’re not affected,” she says, the frustration in her voice palpable.

With winter approaching, she’s worried about where she—where anyone in this town—will live.

“This has been the most stressful two weeks of my life,” Yennie says as she hangs out next to the Salvation Army trailer, across the street from the fire hall/city hall turned command center on a Sunday afternoon.

For weeks now this mother of four boys, ages 2 – 9, has been sifting through her life, she says, trying to decide which of her belongings to keep and which to throw.

Early on, when she talked with her boyfriend on the phone as he watched the river rise and cross the road toward her home (she was out of town), she knew what was most important. She told him to save the baby pictures. But he couldn’t find them. Yennie later found the box of pictures buried in mud. She threw the photos in a bucket of water, dried and saved them.

She understands what can, and can’t, be replaced.

For the most part, Yennie sounds strong. But you can see the worry in her tired eyes and sometimes hear it in her voice, when the tough veneer cracks just a bit. “People are starting to get stressed,” she says, repeating that word, “stressed.”

She has no flood insurance. Few residents did. The town isn’t in a flood plain, she says. 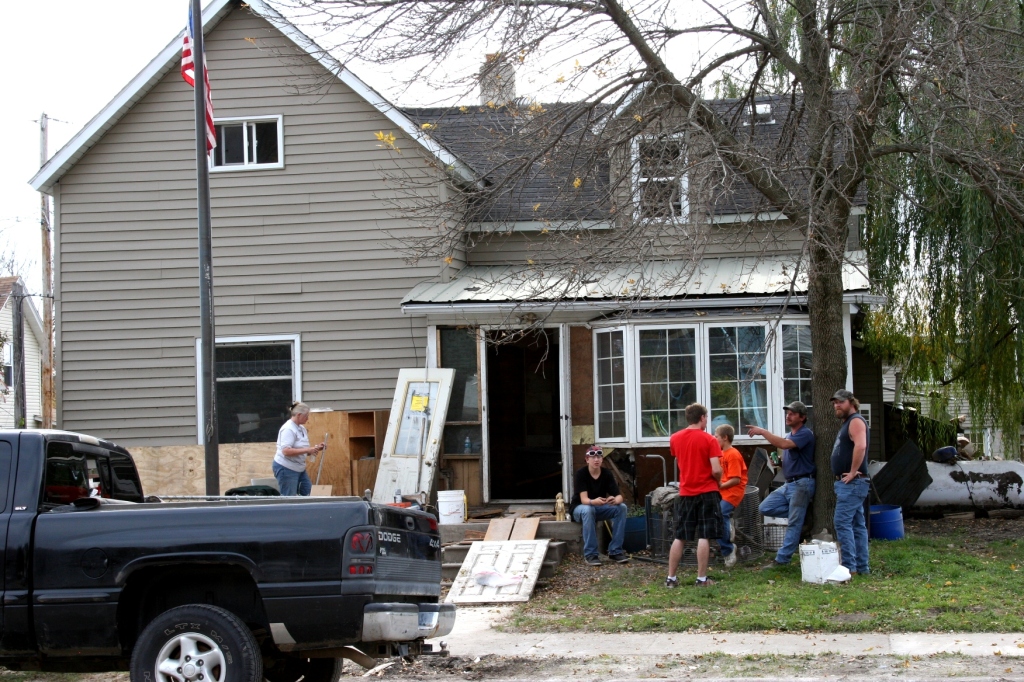 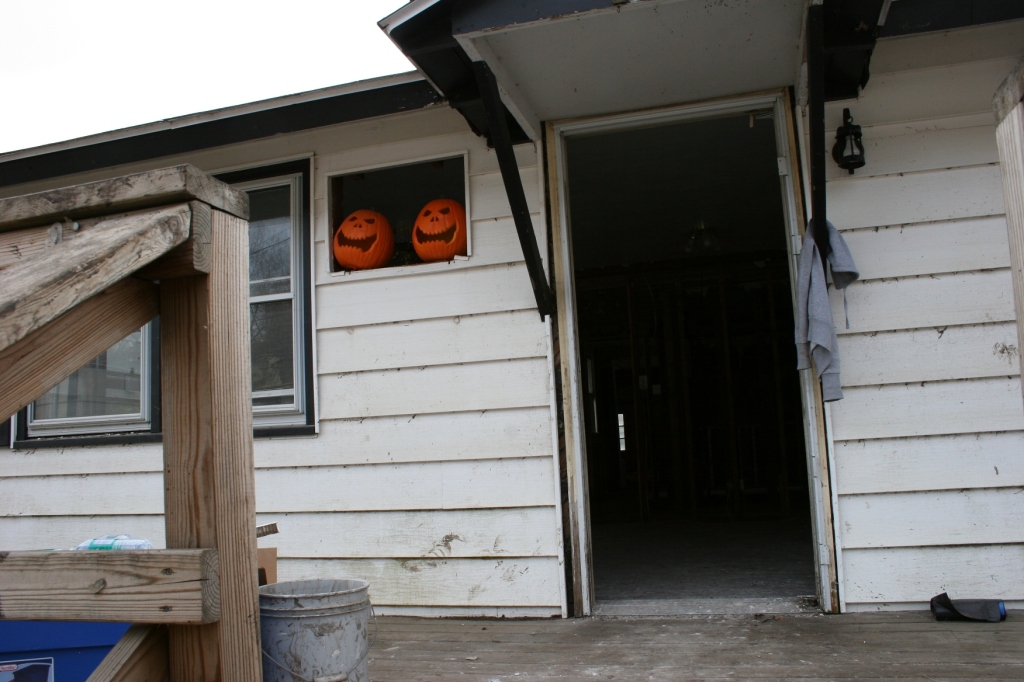 The owner of this water-ravaged home along Minnesota Highway 60, the main route through Zumbro Falls, still has a sense of humor as Halloween approaches.

Despite all of her worries about the future, despite her anger at FEMA, Yennie is quick to praise the Red Cross, the church groups and others who have thronged to this community to assist flood victims.

Twenty-four men from Barron, Wisconsin, with Mennonite Disaster Services, came to her aid, helping with clean-up at her riverside home. She’s grateful to them.

Inside the Zumbro Falls fire hall, a Thank You Wall recognizes those who have helped with flood recovery.

Now, as Yennie ponders a question about life someday returning to “normal,” she laughs. “What’s normal?” she asks. “Normal is a setting on a washing machine.”