WHEN MY GIRLS were little—which would have been about 25 years ago—stickers were all the rage. Kids filled mini sticker books with page after page after page of stickers. Puppies and kitties and…, for my equine loving second daughter, horses.

I didn’t understand the rationale behind transferring stickers from one piece of paper to another. But the girls loved their sticker collections and paging through them. 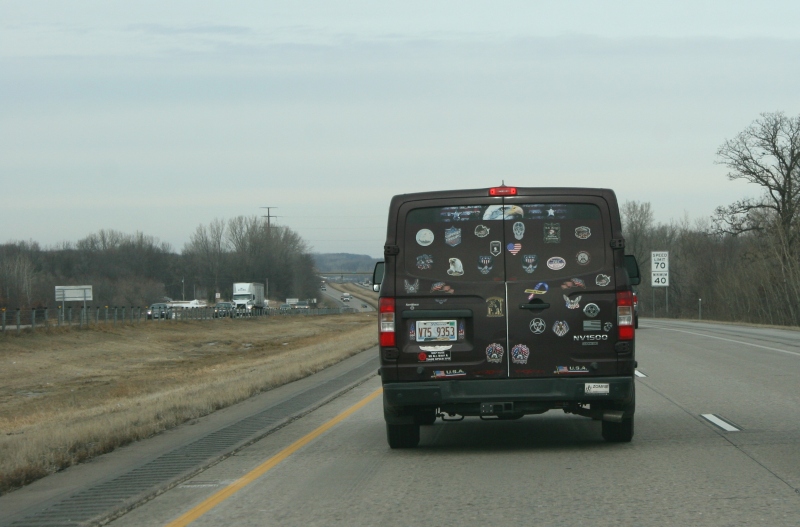 That memory flashed through my mind Saturday afternoon when I spotted a mobile sticker collection on a vehicle heading north toward the Twin Cities on Interstate 35. At first glance, I thought the stickers purely patriotic: Home of the Free, Support Our Troops, Land of the Free Because of the Brave.

But then, after examining the photos I shot of the vehicle, I discovered these stickers: Zombie Outbreak Response Team and Deep Inside We All Want a Zombie Apocalypse. Uh, no we don’t. Except perhaps in Illinois. Lawmakers in the House last week approved October as “Zombie Preparedness Month.” You just can’t make this kind of stuff up. The legislators aren’t really talking zombies here, but rather preparation for natural disasters, according to media reports.

But then again, who knows? The license plate on the patriotic zombie vehicle reads Illinois.

TELL ME: What do you think of any of this? The stickers? The legislation?

MINNESOTA HIGH SCHOOL sports fans, the results are in, and the Winona Winhawks are not advancing in USA TODAY‘s competition to name the country’s “best” high school mascot.

These regional winners are now vying for prizes ranging from $100 – $2,000 for their high school’s athletic departments:

Just FYI because I did not know, and you probably don’t either, a Wyvern is a legendary poison-breathing creature that is part dragon, eagle and snake. Obezags is an anagram of gazebos, a feature of the Key School campus.

Which mascot would you choose as the most unique/best?

Even though I live in Region 4, I’m going with the Sugarbeeters of Chinook, Montana, population 1,500. Chinook Sugarbeeters rolls off my tongue with a rural ring that pleases me. And that’s as good a reason as any to back a community which once was home to a massive sugarbeet factory, according to the Chinook Area Chamber of Commerce website.

The Chamber also states that Jay Leno once claimed the Sugarbeeters ranked as number two out of 100 “strangest mascots” in the U.S.

Whichever mascot wins, I hope the national online voting process is not plagued with technical problems and the unsportsman-like conduct of the regional rounds. Click here to read my previous post on those issues.

Let’s keep this all in perspective, people. Better to lose than to resort to name-calling and mean-spirited competition. 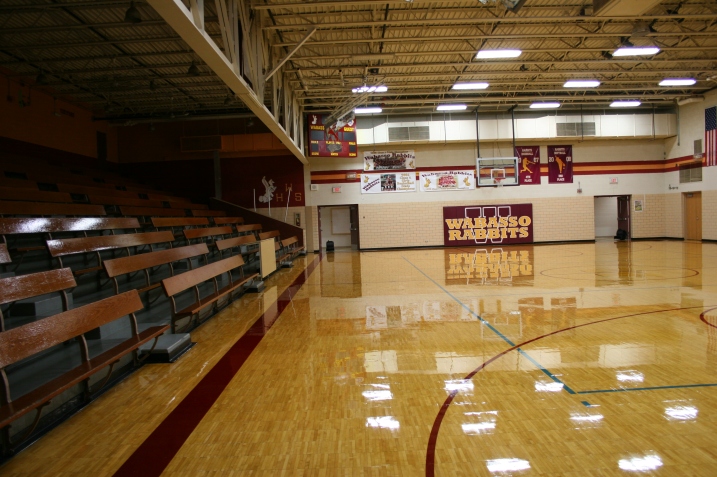 A gym at Wabasso High School, home of the Rabbits and my alma mater. Minnesota Prairie Roots file photo used here simply to illustrate sports and not directly connected to the mascot competition.

I’M NOT SURPRISED, not at all, that a USA TODAY sponsored competition to find “the best” high school mascot in the nation has turned into a verbal sparring match between fans of the Winona (MN.) Winhawks and the Centralia (ILL.) Orphans.

The issue apparently started when USA TODAY’s online voting site crashed on Thursday, the final day of the competition.

From what I can gather, the Orphans held a strong lead early on with the Winhawks implementing a strategic last-minute game plan in an attempt to claim the Region 4 title.

Now these high school sports fans are accusing each other of poor sportsmanship, unfair voting tactics and more, while others are calling for a boycott of USA TODAY’s contest. As of Saturday morning, commenters had posted 546 comments on the Region 4 voting page, well beyond any other region. Region 6, the next closest with the top two mascots separated by less than 3,000 votes, had about half the comments.

Region 4 has also racked up the most votes at nearly 7.9 million, compared to the second nearest vote total of almost 4.5 million in Region 5. The vote and comment totals in Region 4 show you just how heated this competition has become between the Minnesota and Illinois teams.

I read only a sampling of the comments from each region, enough to surmise that codes of good sportsmanship have been replaced by name-calling and a whole lot of negativity, especially between Winhawks and Orphans supporters. I wonder if the USA TODAY high school sports staff wishes they’d never created this competition.

In a special announcement posted on the contest website, USA TODAY extended the voting period, which resumes at 3 p.m. ET Monday, March 18, and ends at 3 p.m. ET Wednesday, March 20.

That decision is not sitting well with Orphans fans, based on comments posted on the Region 4 voting page. Online stats show the Illinois team leading with 36.937 percent (4,071,313) and the Winhawks trailing with 34.436 percent (3,795,630) of the votes. Some Orphans supporters are accusing USA TODAY of changing the game rules because of complaints from Winhawks fans.

True or not, I don’t know. But here’s USA TODAY’s official stance.

Wow! When you all turn out to support your mascot, you can really bring the site to a crawl. Because we want to make sure that everyone who wants to vote can vote, we don’t want any technical difficulties to get in the way. So the regional round of the USA TODAY High School Sports’ Best Mascot competition will resume…

I expect the war of words will resume, too, on Monday.

Does any of this surprise you? Not me. Sadly.

Two thousand dollars and a national title are at stake here. But now, with all the controversy and unsportsmanlike conduct surrounding this contest, would you really want your mascot to win?

Here are the current standings, top two in each region, as of Saturday:

CLICK HERE AND HERE to read my first two posts on this contest. To vote in the USA TODAY “best” high school mascot competition, click here.