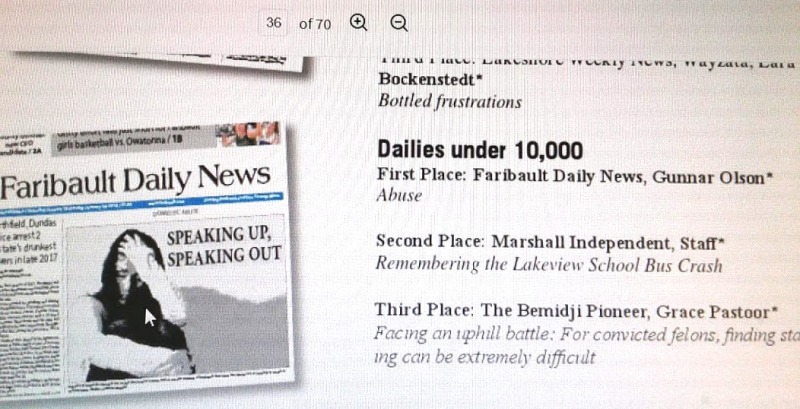 THE NEXT TIME YOU CRITICIZE a journalist or rant that reporters are nothing but a bunch of biased writers, consider this. My local newspaper, the Faribault Daily News, recently placed first in the Social Issues category of the 2017-2018 Minnesota Newspaper Association Better Newspaper Contest. For a series on domestic violence.

The award-winning series, titled “Abuse,” published over a period of a year and covered the gamut from information to interviews with survivors and their families, advocates, police and more. These were powerful pieces, written primarily by reporter Gunnar Olson but also by Regional Editor Suzanne Rook.

It is the personal stories which made this series. Emotional stories. Gut-wrenching, difficult stories. Stories that needed to be told, heard, written, read and, then, remembered. 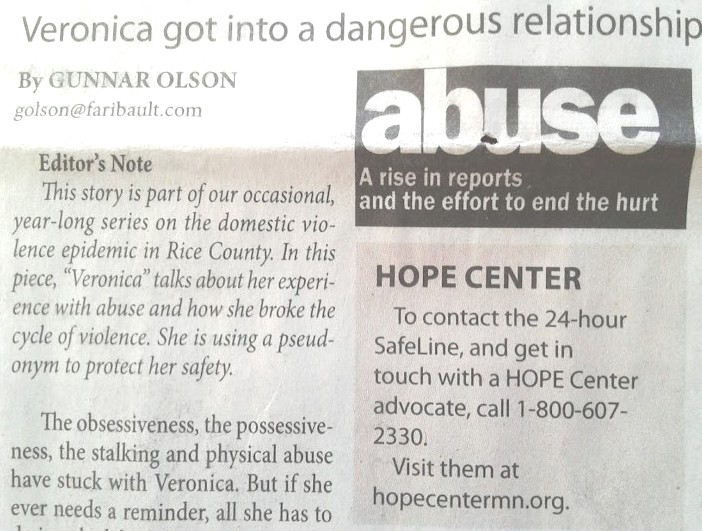 When a reporter can take a topic like domestic abuse and violence, interview people in a caring and compassionate way, and then share those stories through dynamic writing, that work deserves recognition. By fellow journalists. And by readers. I applaud the Daily News for raising awareness, educating and connecting people to this social issue via deeply personal stories.

As a former weekly and daily newspaper reporter, I will confirm that writing stories like this is difficult. I once wrote a series on eating disorders that included interviewing a survivor and the mother of a young woman who died from anorexia. Although I kept my professional persona in place while working on the series, inside my heart hurt for every single individual I interviewed. Reporters have a job to do. But they are still human.

I often hear newspapers criticized for printing nothing but bad news. That raises my ire. Do not kill the messenger. Newspapers are not PR mouthpieces. They are newspapers. It is their job to report the news—good and bad. Features and hard news. They do not cause the bad news. People do.

Yes, I’ve sidetracked a bit. But I’ll circle back now and reaffirm how much I appreciate my community newspaper. Reporters keep me informed of local issues and happenings, of good news and bad. I am grateful for their hard work and their willingness to stretch beyond the everyday news to cover important topics. Like domestic violence. 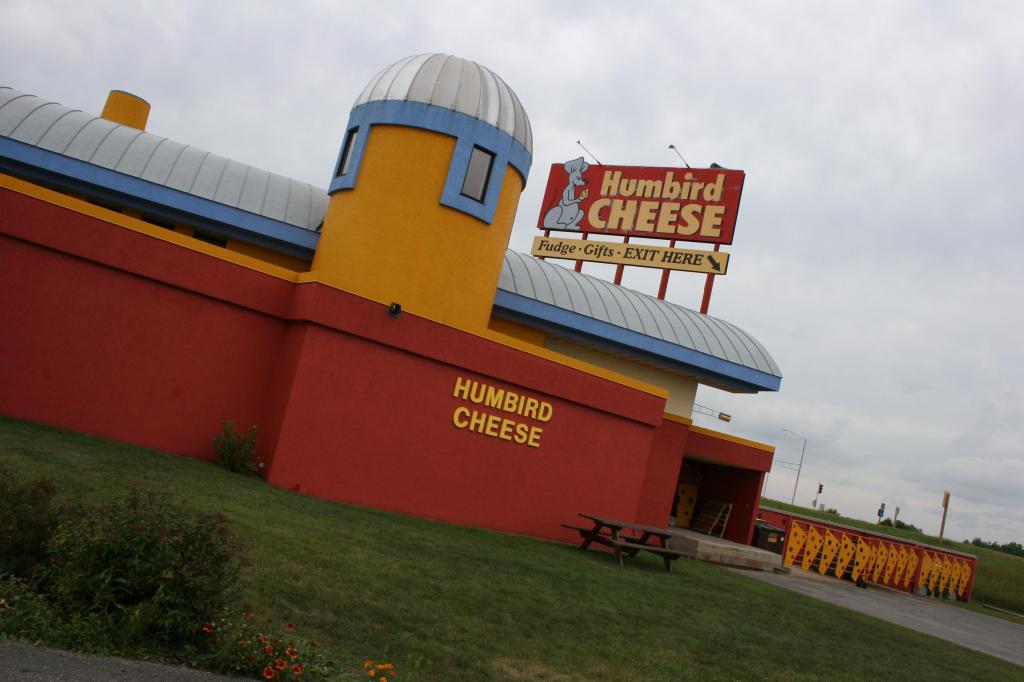 Let’s start with the humorous of the two, a little story from my second daughter, who lives in eastern Wisconsin.

Along with a photo, she sent this text message: “They teach them early in wi.”

I studied what appeared to be a child’s drawing of a hefty hunk of cheese and a mouse, along with words too miniscule to decipher on my cell phone screen.

M: “It was a drawing with a haiku in a surgery dept waiting rm. Can u read the haiku or is it too small?”

M: “It says ‘I love to eat cheese. Swiss Colby pepperjack too. I’m almost a mouse.’ By devon age 9.”

Honestly, don’t you just have to laugh at the subject of this haiku. Of all “the things I love,” this 9-year-old Wisconsinite wrote about cheese?

Would a Minnesota child ever choose to write a cheese haiku? 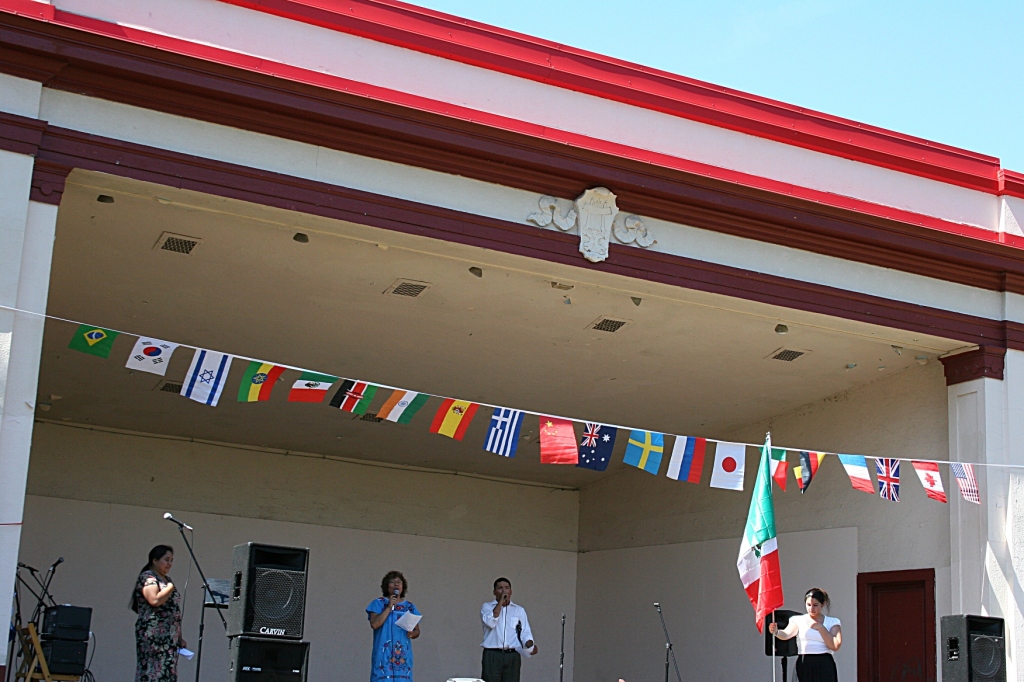 Numerous cultures were represented during the International Festival held in September at Central Park in Faribault. Here singers perform the Mexican national anthem in the band shell.

NOW TO THE OTHER  STORY about differences, written by sports reporter Brendan Burnett-Kurie and published Sunday on the front page of The Faribault Daily News. Here’s the headline for that top-notch feature, which should be required reading in every Faribault (maybe even Minnesota) classroom and home:

“The beautiful team…How the Cannon Valley soccer team bridged cultural gaps and came together around the game they love.”

I tipped Brendan off to this story after my good friend Mike Young told me about the soccer team at Cannon Valley Lutheran High School in Morristown. Mike serves as the school’s volunteer development director. Yes, you read that correctly. Volunteer.

But back to Brendan’s story. He wrote about the school’s recently-rejuvenated soccer team which includes a melting pot of students—of different ethnic backgrounds, different sizes, different ages and from different schools. (CVLHS, with less than 20 students, couldn’t field a team solely from within.)

It’s one of those feel-good stories that make you smile. These boys became a team and became friends. Differences didn’t matter to them. Not differences in their skin colors, their heights, their ages, their shoe sizes, their anything.

Brendan writes: “One day during practice they all took off their shoes and flipped over the tongues, comparing the sizes. Little fourth-grader Yianko Borrego had size 4 feet. The largest were size 13.”

These boys can all teach us a thing or a hundred about acceptance.