WHEN THE AUCTION BOOKLET arrived in the mail, I thumbed through page after page of photos showing Native American artifacts. Tools. Knives. Triangle points. And more. Made from bone, stones, quills…

But when I reached the middle of the publication from Helbling Auctioneers* for a May 22 “Large South Dakota Artifact Collection” auction in Lakeville, Minnesota, I paused. Item #131 on the auction list features seven original 1907 photogravures by noted photographer Edward S. Curtis. He is well-known for documenting Native Americans living west of the Mississippi River via his incredible photography.

I was first introduced to Curtis while viewing 60 prints in his “The North American Indian” collection at the Montgomery (MN) Arts & Heritage Center in January 2020. It was a temporary installation funded by a $4,000 grant from the Carl and Verna Schmidt Foundation and an incredible gift to this community of some 3,000.

Curtis has a connection to the Montgomery area, moving from Wisconsin to nearby Cordova as a child. As he grew, Curtis often traveled with his preacher father, sometimes canoeing with him on the Cannon River. That fostered his love of the outdoors. And apparently his interest in photography. By age 17, he was working at a photography studio in St. Paul. Then, in 1887, the family moved to Seattle.

That’s the brief backstory on the man who would become famous for his historical photographic documentation of Native Americans. He lived with these peoples, observed them, understood them, respected them. And that shows in his portraits, his photographs of everyday scenes, of their lives.

The seven original photogravures on the May auction block are a mix of portraits and everyday life. I expect they will draw the interest of historians, collectors and others. Certainly, they caught my eye as I paged through all those photos of artifacts.

I appreciate the challenges long ago photographers like Curtis faced with equipment and the whole photographic process. They couldn’t fire off frame after frame to get the perfect image. Rather, they often had to get it right the first time. When I consider that, I am even more impressed by Curtis’ work. He was a master of craft, honed from his connection to the outdoors, his understanding of Native Americans and his desire to honor them with his photography.

FYI: The May 22 auction at the Holiday Inn & Suites in Lakeville begins at 10 a.m. and features primarily items from the Ernie & Barb Spaid Family Artifact Collection (from South Dakota). However, in the middle of the sale, a small collection from North and South Dakotas will be sold. That includes the seven original Edward Curtis 1907 photogravures. For more info about the auction, click here.

* Bob Helbling of Helbling Auctioneers of Kindred and Hankinson, N.D., is a distant cousin of my husband. I wrote this post because of my interest in the photography of Edward S. Curtis. 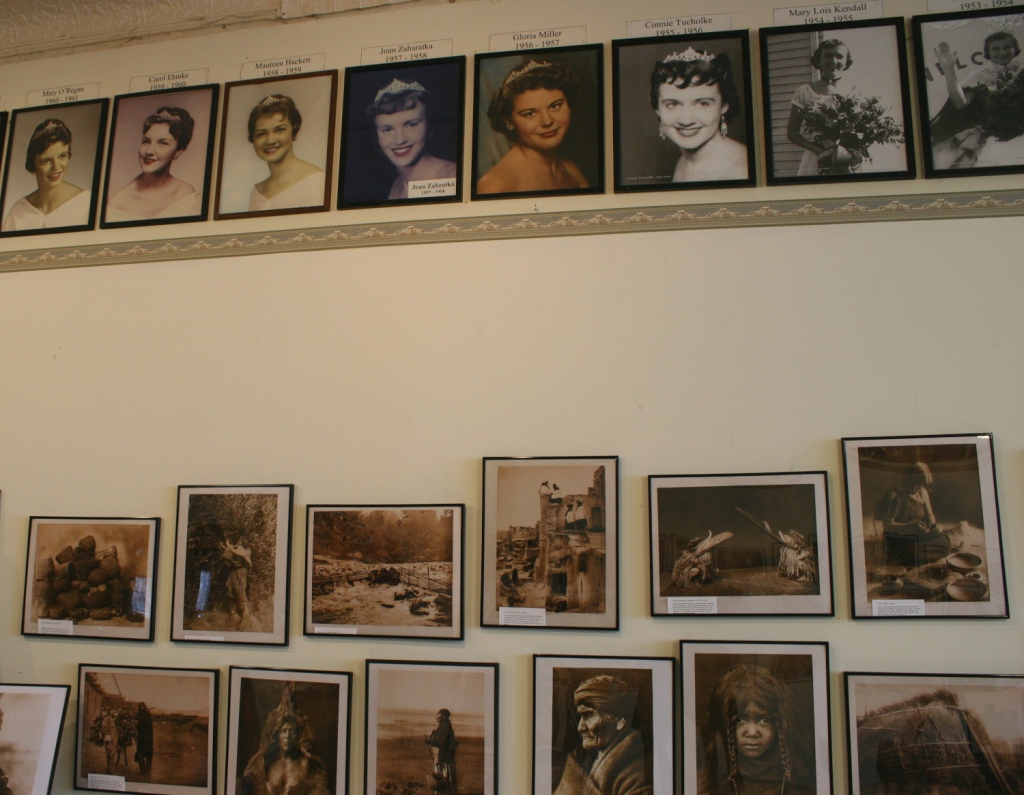 A permanent exhibit of Kolacky Days queen portraits hangs above the temporary exhibit of Edward Curtis photos of Native Americans. 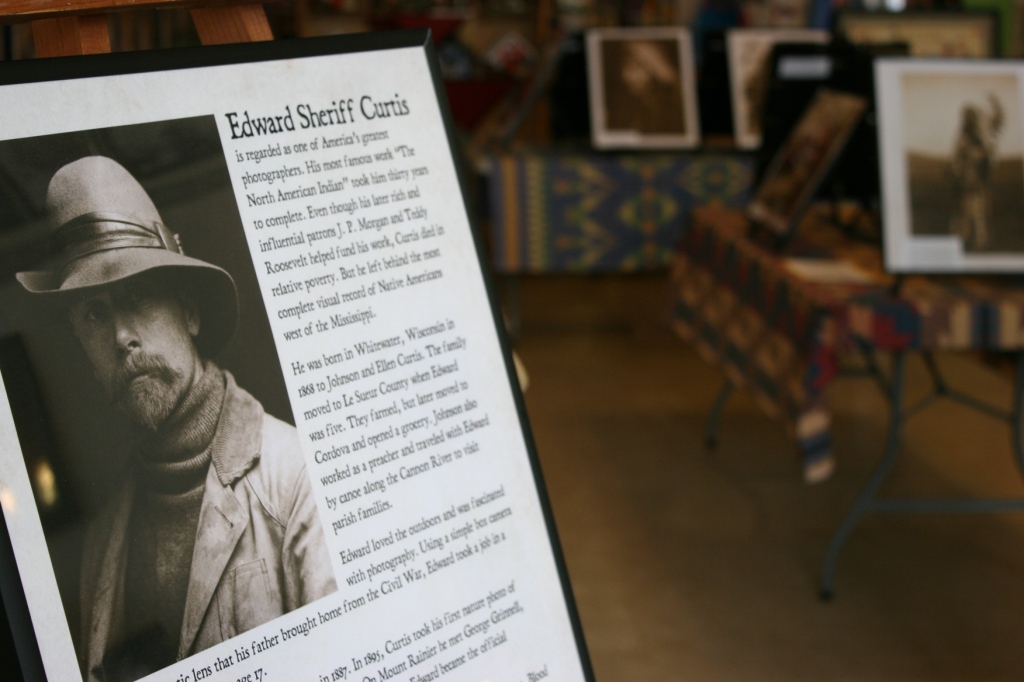 A photo of Edward Curtis with info about this noted American photographer.

Visitors are welcome to sit and page through Edward Curtis books.

Despite his outstanding photographic reputation, Curtis was previously unknown to me. But no more. Recently I visited an exhibit of around 60 selected photos from his “The North American Indian” collection at the Arts and Heritage Center in Montgomery. His entire body of work encompasses 40,000 photos, many published in 20 volumes.

Historic Hilltop Hall houses the Montgomery Arts and Heritage Center on the right and a floral and gift shop on the left.

To see these photos, termed part of the “most complete visual record of Native Americans west of the Mississippi,” right here in rural Minnesota is such a gift. A $4,000 grant from the Carl and Verna Schmidt Foundation funded the exhibit in Montgomery, a community of some 3,000 just 20 miles northwest of Faribault.

Edward Curtis photographed Native Americans of the west over a 30-year period.

Displaying Curtis’ photos here brings the photographer full circle back to Le Sueur County. At the age of five, he moved here with his parents from his native Wisconsin, eventually settling in Cordova. Here he grew up to appreciate the outdoors as he canoed with his preacher father along the Cannon River. By age 17, Curtis was working at a photography studio in St. Paul. In 1887, he moved to Seattle. 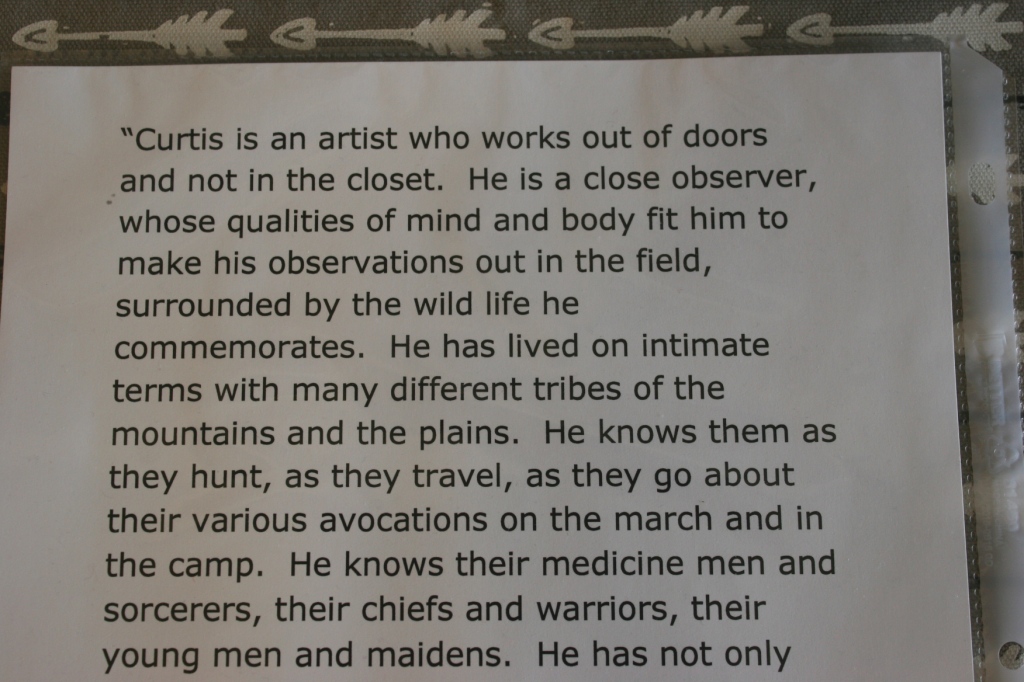 A snippet of a 1906 comment about Edward Curtis by President Theodore Roosevelt.

That’s the backstory of a photographer who earned the praise and financial support of President Theodore Roosevelt, who called Curtis a “close observer.” That is evident in the documentary photos of the Native Americans Curtis came to know well and to, clearly, value and love. 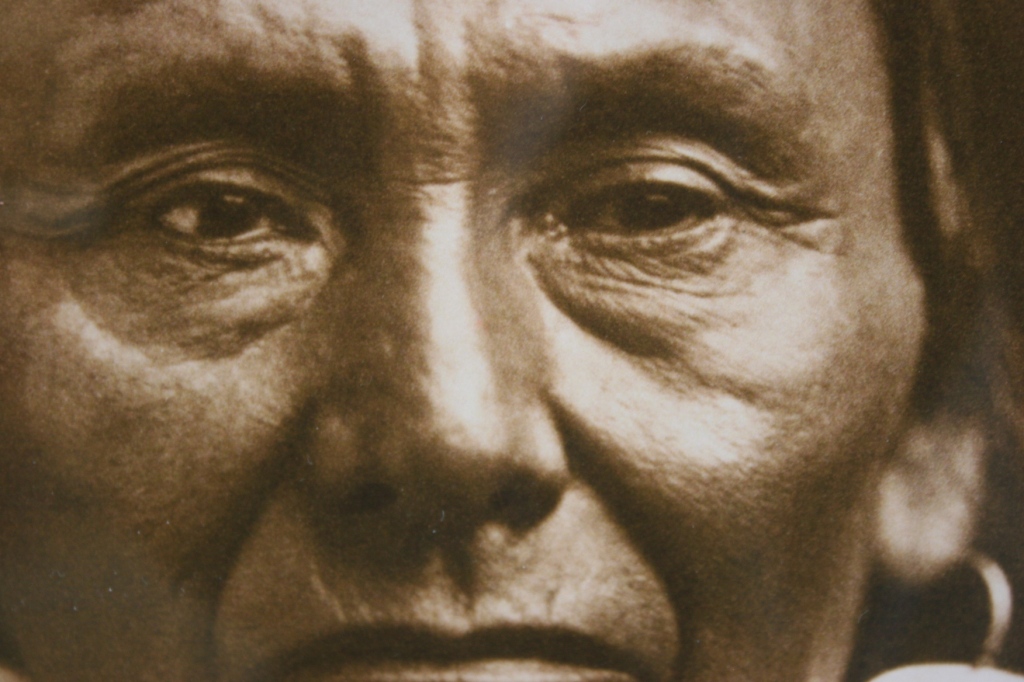 A portion of the portrait of “Chief Joseph– Nez Perce”, 1903

His portraits of western Native Americans document not only a culture, but also history and personalities. As I studied the photos, I admired faces weathered by wind and sun, steady strength in profiles, joy and sadness in eyes. I admired, too, the artistry of woven baskets, handcrafted pottery, curved canoes, feathered headdresses and detailed beadwork.

An insightful and beautiful quote by Edward Curtis.

I expect if I was to revisit this exhibit, I’d notice details I missed. There’s just so much to see, to take in, to appreciate, to contemplate. A culture. A people. A way of life. A history. A connection to nature.

More photos from the exhibit.

I am grateful to long-ago photographers like Edward Sheriff Curtis for his efforts in connecting personally with his subjects, for caring and for documenting with his camera. His work is truly remarkable.

Info about Edward Curtis included in the show.

FYI: “The North American Indian” exhibit at the Montgomery Arts and Heritage Center continues until Saturday, February 29. The arts center is open from 2 – 5 pm Thursdays and Fridays and from 9 am – noon Saturdays and is located at 206 First Street North in downtown Montgomery, Minnesota.