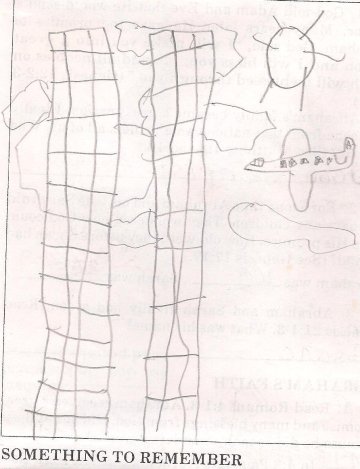 A year after the terrorist attacks, my then 8-year-old son drew this picture of a plane aimed for the twin towers. He was a third grader in a Christian school  and needed to think of a time when it was hard to trust God. To this day, this drawing by my boy illustrates to me how deeply 9/11 impacted even the youngest among us.

EDITOR’S NOTE: This post first published on September 11, 2012. Today I am republishing it (with updated numbers) in honor of those who died 15 years ago today in acts of terrorism against our county. Blessed be their memories.

IF I WAS IN MY HOMETOWN today I would visit the cemetery just outside of Vesta, to the north along the gravel road and atop the lone hill which rises ever so slightly in a sea of ripening corn and soybean fields.

I’d walk the rows until I found the gravestones of the Kletschers, mostly clumped together, close still even in death.

I’d pause at the tombstones of my paternal great grandparents and grandparents, my father and then, finally, my Uncle Mike, the bachelor uncle who was like a second father to me and my five siblings. He lived the next farm over, farmed with our father and joined us for everyday meals and holidays. His inherent curiosity is a trait I possess.

Today thousands will visit graves of those who lost their lives on that horrific day 15 years ago when our nation was attacked by terrorists.

My uncle had never, as far as I know, been to New York or Washington D.C. or Pennsylvania, never traveled much. He stuck close to the prairie, close to the farm, close to the land he cherished with the depth of love only a farmer can possess.

I miss him and grieve his death with a depth of grief that comes only from loving someone deeply.

Today, on this the 15th anniversary of 9/11, countless family and friends and co-workers and others will grieve with a depth that comes from loving deeply. They may grieve privately or at public ceremonies marking the date nearly 3,000 innocent individuals lost their lives.

Some will travel to that field in Stonycreek Township in Somerset County, Pennsylvania, where the passengers of Flight 93 fought back against those who would terrorize this nation.

It is the one place I can most relate to in the whole horribleness of this American tragedy because my roots reach deep into the land. Flight 93 crashed in a field near Shanksville, a rural community of 250 in the Laurel Mountains of western Pennsylvania with a population 100 less than my Minnesota hometown.

None of this diminishes the significant impact made upon me by the terrorist-directed planes slamming into the twin towers or the destruction wreaked upon the Pentagon in urban settings.

But big cities—even though I’ve been to New York once in my life many decades ago while in college—are unfamiliar terrain, skyscrapers as foreign to me as a silo to a city-dweller.

A lone plane crashing into a field, plowing into the earth, that I understand.