Documentation of why you should stay off rural roads during a winter storm January 19, 2020

Just outside of Faribault Saturday afternoon along Rice County Road 25, this old farmhouse was easily visible during the storm.

THE WEATHER IN MINNESOTA has calmed considerably since Saturday when high winds created blizzard and near-blizzard conditions throughout much of the state.

Now we’re dealing with frigid temps, just two degrees above zero mid-morning here in Faribault with an expected high of maybe 10 degrees. Yes, that’s cold, even for those of us who are life-long residents. But we’ve seen much colder, in the double digits sub-zero.

Weather often dominates conversation in Minnesota because it so dramatically affects our lives. Our plans. Our off-work time, especially in the winter when snow removal can seem like a part-time job. But, hey, we choose to live here, right?

Visibility was good as we started out on CR 25 Saturday afternoon.

And sometimes we make choices that aren’t too smart. Like mine yesterday to venture with Randy into the countryside to check out conditions. Per my post late Saturday afternoon, here are more photos from that short drive east of Faribault and back.

Lots of farm sites and rural homes hug the roadway, breaking the wind.

The American flag flying straight out shows the strength of Saturday’s wind on a rural site just east of Faribault along CR 25. 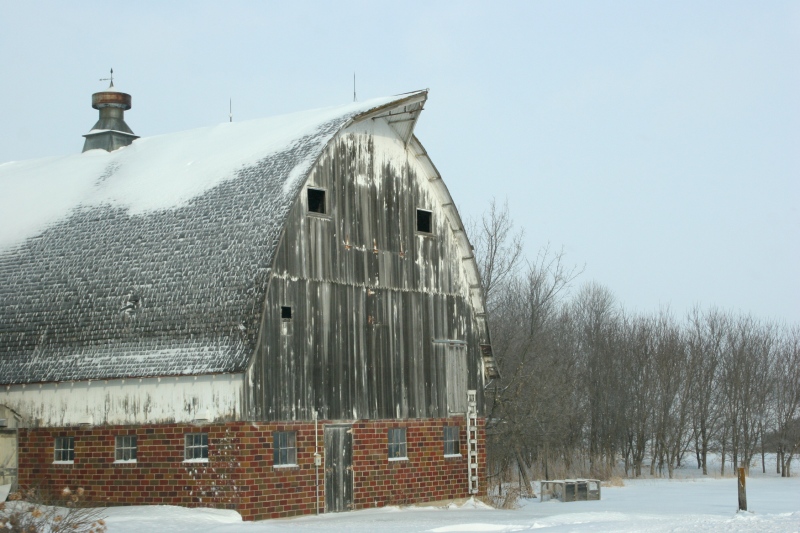 After we passed this barn on our friends’ farm site, conditions deteriorated.

Heading east out of town along Rice County Road 25/197th Street East, conditions were good. Blowing snow was minimal and we could easily see farm sites along the route. But then, as we edged into more open land, with no treelines or farm sites breaking the wind, visibility quickly lessened. 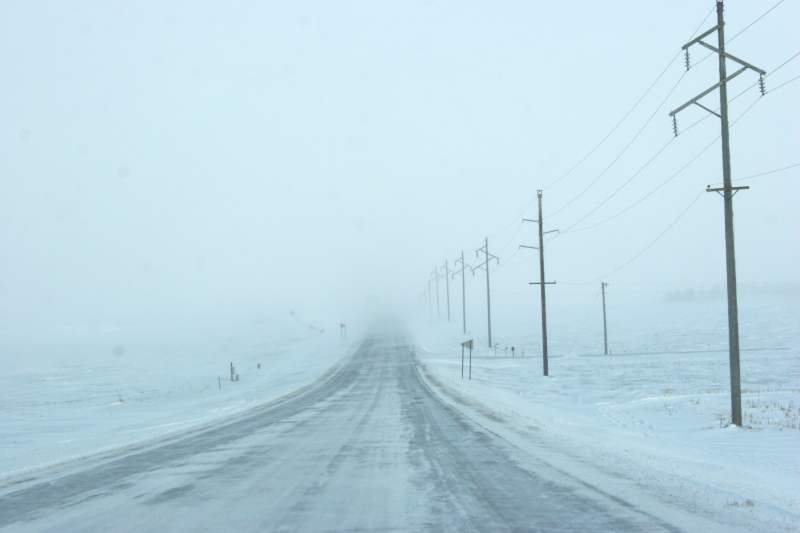 We drove into near white-out conditions along CR 25 near the intersection with CR 23.

We found ourselves enveloped in white, white-out conditions is the proper term.

Snowdrifts partially edged and crept onto sections of CR 23.

As we continued to drive south on CR 23, blowing snow reduced visibility even more.

Yes, I was scared and even asked Randy to turn around and retrace our route. Easier said than done. Instead, he eased onto County Road 23. Blowing snow still limited visibility although I could see near-the-road farm sites in the haze of white. Considerable drifting of snow near and onto the road now concerned me.

Snow pushed back from the roadway at the intersection of CR 23 and Minnesota State Highway 60 and photographed from the front passenger side window.

By the time we reached Minnesota State Highway 60, I was so ready to be done with this little adventure. Plowed snow banked the intersection. Randy rolled down his window to check for oncoming traffic.

Once on Minnesota State Highway 60 heading west, travel improved. More farm sites border this highway than along the county roads.

Then, thankfully, as we drove west toward Faribault, with less open space and farm sites breaking the wind, visibility improved.

Conditions as we approached Faribault were good, considering what we’d just driven through.

Lesson learned: Stay home during a winter storm, especially when you advise others to do so.

Thank you for not crashing into my house November 23, 2013

FOR 29 YEARS, MY HUSBAND AND I have lived in a modest 1 ½ story corner house at the bottom of a hill along an arterial street in Faribault.

Living in a home at the bottom of a hill is not the most desirable location during a Minnesota winter. I was reminded of that again Friday when, between 7 a.m. – 7:45 a.m., someone drove onto our side yard from the side street. 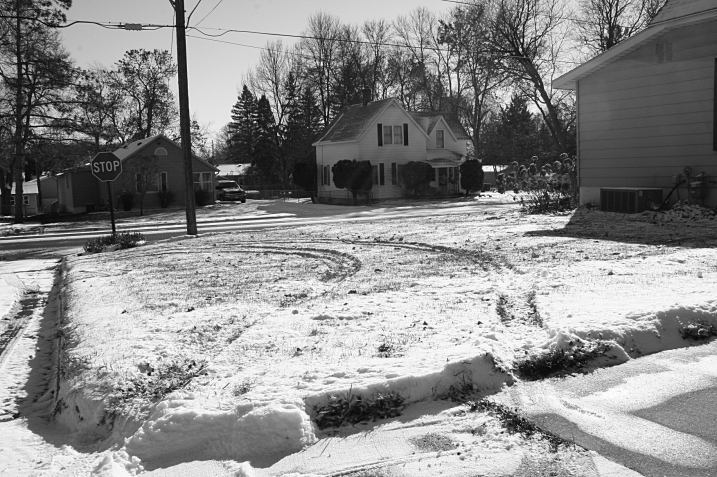 That’s the corner of our house on the right with the vehicle tracks swerving into the side yard.

I did not witness this incident, thus can only conclude that the driver swerved across the end of our driveway, onto the lawn and back into the street to avoid a collision. We’d received a dusting of snow the previous day and city streets were slippery.

This makes me ever so slightly nervous, to see tire tracks within 15 feet or so of our house.

Look just to the left of the meter and electrical box and above the air conditioner and you will see marks from a runaway tire that hit our house years ago.

And I am justified in feeling unsettled. I’ve actually watched a tire fall off a vehicle and then careen down the hill, the tire picking up speed and rolling smack dab into our house, barely missing the gas line. The tire marks are still there on the siding.

But even worse, a decade or more ago, an unattended parked car rolled down an intersecting street a half a block away and crashed into my neighbor’s house. I don’t recall specifics of the damage, except some foundation repair was needed.

Yes, living in a corner house at the bottom of a hill and along a busy street presents potentially dangerous situations. We’ve even had chunks of snow, thrown by a snowplow, hit our front windows.

Yet, what I dislike most about living in the valley has nothing to do with traffic or road conditions. I miss seeing the sun set.

The sun begins to set as we drive west on Interstate 90 near St. Charles on New Year's Day.

FOR EVERY MILE WEST my husband and I drove Sunday afternoon, I felt as if the bully wind shoved us two miles back east into Wisconsin. The wind, raging in from the northwest on January 1, seemed that forceful. It was a long 300-mile drive back to Minnesota from our daughter’s Appleton, Wisconsin home, bucking winds of 30 – 45 mph, at our estimate. 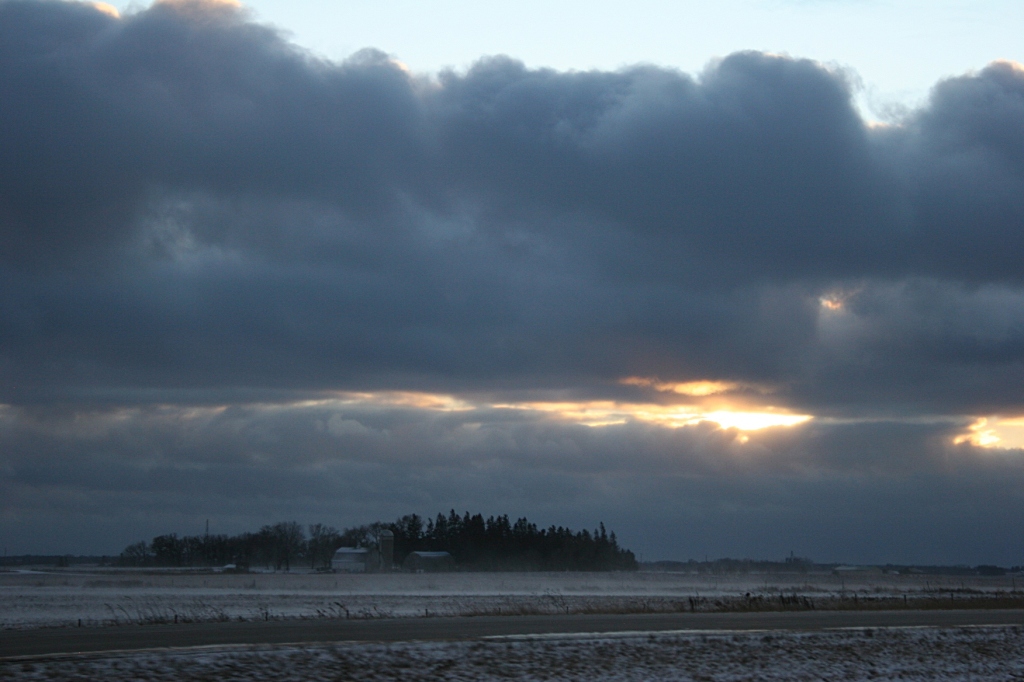 Whipped by strong winds, snow sweeps across farm fields along I-90 in southern Minnesota Sunday afternoon.

Despite the powerful winds, I was thankful for the minimal snow cover. Any more snow than the two inches or less covering the ground between eastern Wisconsin and our southern Minnesota home, and we would have been stranded in Appleton. As it was, the occasional snow squall reminded us just how quickly visibility can become an issue.

Not until we reached the two-lane section of U.S. Highway 14 between Dodge Center and Owatonna, on the final stretch of our journey, did drifting snow sometimes become a concern. The highway wasn’t blown shut, but conditions left me wishing we’d taken our usual U.S. Highway 52 from Rochester to Zumbrota then State Highway 60 to Faribault route.

Despite the gas-sucking travel on Sunday, we drove on mostly snow-free roadways, a bonus on a weekend when two separate snowfalls created occasionally hazardous driving conditions through-out Minnesota and Wisconsin.

High winds pushed eastbound traffic, like this car, along I-90 late Sunday afternoon.

Late Friday morning while traveling along Interstate 90 east of Rochester, we encountered a partially-closed traffic lane due to an earlier accident. A flat-bed semi trailer was parked along the east-bound shoulder with the driver loading debris scattered in the median.

We would learn upon our return Sunday evening that a family member was injured in a crash with an enclosed semi along I-90 on Friday morning. We’re not sure whether the scene we passed by was the site of the accident involving our nephew’s wife. But we do know that Heidi was traveling from Winona to work in Rochester when her car hit an icy patch as she was changing lanes, spun out of control into a semi and was then struck by a pick-up truck.

She had to be cut out of her car.

Thankfully, Heidi was not seriously injured and is apparently going to be OK. She was transported to St. Mary’s Hospital in Rochester, where she was diagnosed with a concussion and held overnight for observation. She’s bruised, sore and now back home recovering.

Heidi’s car, according to her mother-in-law (my sister-in-law) did not fare so well. The passenger side was pushed in and the back end was shoved into the back seat leaving only the driver’s seat, where Heidi was sitting, intact.

That’s how bad this accident was in terms of potential for serious injury, or death.

You can bet my extended family is offering prayers of thanksgiving that Heidi, the mother of two young children, survived, and survived without serious injury.

The County Road 32 overpass over I-90 near St. Charles slices across the wide sky as the sun sets on Sunday.