Bracing for a strong winter storm in Minnesota April 13, 2018

A GALLON OF UNOPENED milk sits on the top shelf of the refrigerator. A full loaf of bread is tucked into a kitchen drawer. We are ready. Milk. And bread. Two staples.

Randy and I joke about having milk and bread on hand whenever a major winter storm is forecast for Minnesota. And one is for today in to Saturday with blizzard warnings issued for the western part of the state and a winter storm warning for much of southern Minnesota, including the Twin Cities metro.

I’ve heard forecasts of up to a foot of snow in my area. Heavy. Wet. Preceded by rain (already falling), sleet/freezing rain and then snow. Up to an inch of snow an hour. Plus strong winds.

Saturday will be a good day to hunker down at home and stay off roads. Travel is expected to be difficult, especially on my native prairie where up to 18 inches of snow combined with winds of 40 – 50 mph will create blizzard white-out conditions. Fail to respect those weather conditions and you could find yourself in major trouble if stranded in the countryside. I expect snow gates will be lowered to keep drivers safe and off highways.

Several times in recent weeks, predicted snowfalls have not materialized. But we shouldn’t chance that the weather forecasters are crying wolf. Time will tell…

Be safe, my friends, if you live anywhere in the path of this winter storm.

SOMETIMES I NEED a reminder.

And in this year of the Minnesota winter which never ends, I’ve needed multiple reminders. 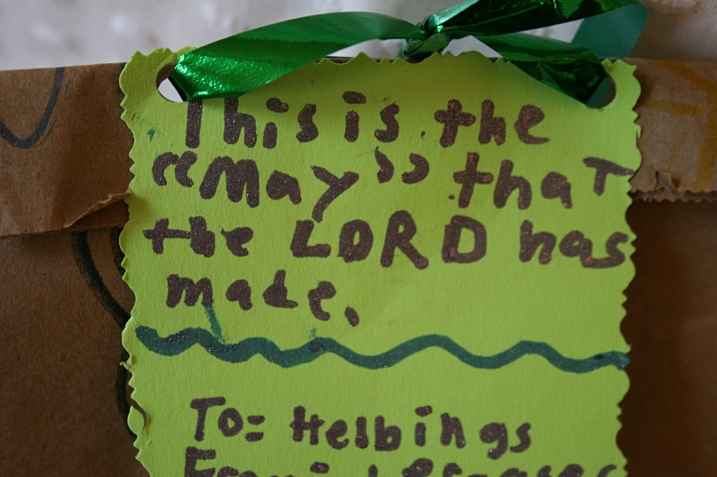 Wednesday morning, I received this note attached to a May Day treat bag deposited on my front steps:

This is the “May” that the Lord has made.

As I write, heavy snow is falling. Parts of Minnesota, including my area, are under a winter storm warming until 7 p.m. Thursday. The National Weather Service is predicting a “powerful winter storm” with snow accumulations of six to nine inches.

Happy first day of May!

But thanks to our friends, the Lerass family, this whole day has become brighter, more bearable, with that pointed message and a sweet homemade treat tucked inside an artfully decorated paper bag. To have such friends, reminding me that I should rejoice in whatever day I’ve been given, rates as a wonderful blessing.

Added to that May Day delight, my husband and I received an early wedding anniversary card from our future son-in-law’s parents. Another reason to smile on this dreary day, this May 1 which the Lord has made.

Apparently God has a sense of humor.

A few days ago He blessed me with daffodils and sunshine, a redemption, I suppose, for the snowfall to come.

UPDATE 6:59 P.M.: Since publishing this post late this afternoon, my doorbell rang for the second time today. I opened it to find another May basket, this one from the Weeg family. My friends clearly know that I love chocolate and the color green. (Right, Billie Jo?) How blessed I am to have such thoughtful friends.

Weather-wise, snow continues to fall, as shown in these two photos just taken from my bedroom window. No taking the camera outside during snowfall.

Happy May Day, everyone.

My backyard in the foreground with Willow Street and my neighborhood beyond.

When I showed you my backyard a few days ago, it was snow-free. Not so this evening.

UP UNTIL ABOUT 45 minutes ago, snow was falling fast and furious here in Faribault, at a rate of an inch an hour.

Visibility had dwindled to a block in town. As for the country, I wouldn’t even want to guess.

But now, shortly after noon, the snow flakes aren’t as thick or as heavy and conditions have improved. Perhaps this is simply a lull in a storm predicted to drop up to 15 inches of snow here in southeastern Minnesota, more in southwestern Minnesota, “more” being 20 inches.

My area of Minnesota is currently under a winter storm warning until noon Monday.

In southwestern Minnesota, where my mom and other family members live, a blizzard warning has been issued. Snow and winds have created difficult driving conditions and low visibility on the prairie, according to information I just read on the Minnesota Department of Transportation website. I expect that snow gates, if they have not already been lowered across roads like Minnesota State Highway 19, will soon be put in place. That means you do not travel those roadways without the risk of a hefty fine. Prairie people, for the most part, understand the dangers of traveling in a blizzard and stay put.

I expect to spend my day holed up at home, wrapping up writing projects for Minnesota Moments’ spring issue. It’s a good day to do that and a good way to avoid working on income tax. I detest rounding up tax information and, this year, have put off the awful numbers task longer than normal.

On the way home from church, my husband and I stopped at the grocery store, a busy place at 10 a.m. As we entered the store, we were greeted by a shopper who just smiled and said, “Here we go again.” He was, of course, referring to the snow.

Then, a half hour later as we exited the store with our bread and other food packed into three bags, a cart-pusher, who was struggling to gather grocery carts in the snowy parking lot, declared, “Winter all over again.”

See the common word in their statements? That would be “again.”

I WOULD LOVE TO HEAR reports about weather conditions in your area. So submit a comment.

I APOLOGIZE for the lack of current photos, but I am without my Canon for a week while it is being cleaned.