Preserving the past at the Old Stone Church, Kenyon, Minnesota June 29, 2010 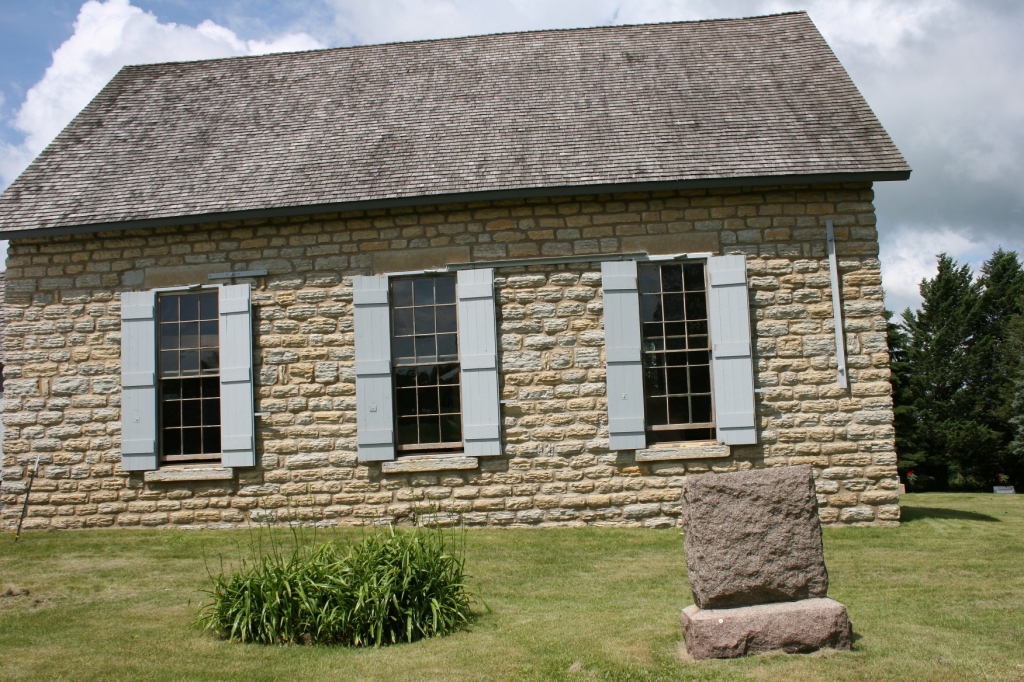 As part of the restoration process, the limestone at the Old Stone Church was tuck-pointed. This shows the east side of the 1870s church located along Monkey Valley Road southwest of Kenyon, Minnesota.

I CAN’T PINPOINT specifically when old country churches became a passion for me. But sometime in recent years, I realized that these rural houses of worship and their often adjoining cemeteries reflect a history and art worth appreciating and preserving.

Such is the Old Stone Church built by Norwegian immigrants near Kenyon in the late 1870s and closed in 1902. A committee of four, whom I met at a Sunday morning worship service, is working tirelessly to preserve this historic church and cemetery for future generations. Already, some $100,000 has been invested in tuck-pointing the native limestone, replastering the interior and more.

These people genuinely care about the original gathering place for members of Hauge Free Lutheran Church, which celebrated its 150th anniversary in 2009. The congregation’s current center of worship stands in Kenyon.

“I wanted to see the old Hauge church come back to life,” says Glen Rud, whose Norwegian grandfather walked several miles from town to attend services here. He appreciates the peacefulness of this secluded location in Monkey Valley, where deer and turkeys range. Here, in this place of peace, lies Rud’s burial plot.

Likewise, preservationist Bob Dyrdahl possesses strong ties to this land. He was born in a nearby log cabin. He’s planted trees around the cemetery and with his sisters donated a historical marker. His daughter was married here two years ago.

Such devotion, respect and care for the Old Stone Church impress me.

Sunday morning as I join the descendants of Norwegian immigrants (and others) in prayer and song, I feel the kinship of faithful fellowship. I feel the very presence of those early settlers who sat upon these pews and raised their voices in their mother tongue. Today, more than a century later, this congregation still sings Ja, vi elsker, the Norwegian national anthem, with the conviction of a generation determined to remember their heritage.

A view from the balcony shows the choir seated next to the beautiful altar. The choir director speaks in Norwegian, then translates, "Stand up, that means." And all rise for the Norwegian national anthem. 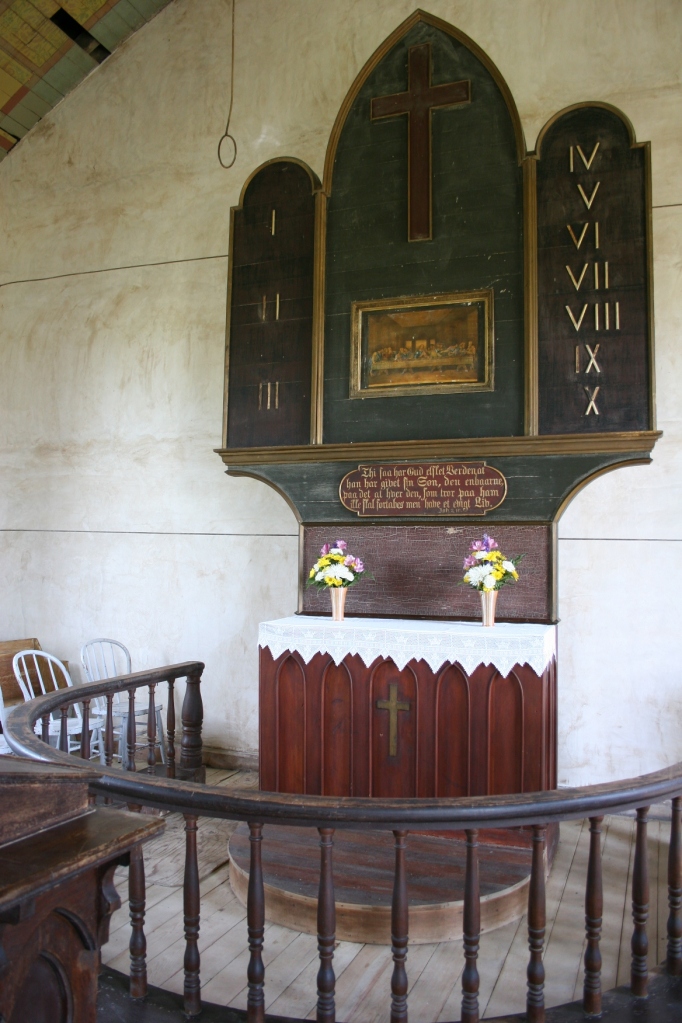 This Old Stone Church altar intrigues me because I've never seen one similar. I wonder whether The Last Supper painting at the center of the altar is a cherished possession transported by ship from the homeland. I wonder why replica tablets of the 10 Commandments were chosen for the altar. And, finally, I appreciate the inscription of John 3:16 in Norwegian.

This photo gives a broad view of the sanctuary. I was seated in the chair to the right side of the balcony support post during worship services. As I take in my surroundings, I notice the knots in the back of the pew before me and the floor patched with a section of wood underneath the sandal of the woman seated next to me. And as my left shoulder brushes against the wooden column, I admire the workmanship and craftsmanship that surrounds me.

Bob Dyrdahl explains that the double-sided pew provided a place for mothers to sit with their babies next to the warmth of the wood-burning stove. Such concern, such love, for those early pioneer mothers touches me.

A steep narrow stairway, just inside the church's interior double doors, winds to the balcony. Even here, in this plainness, I can appreciate history and craftsmanship. At the bend in the stairway, is a band of stenciled wood.

A print of Hans Nielsen Hauge, a 1700s lay leader and reformist in the Lutheran Church of Norway, hangs in the entry of the Old Stone Church. Immigrants honored this lay preacher by naming their church after him. Calling the baptized in the congregation, who have wandered away from the Lord, back to repentance is a common preaching theme among "the Haugeans," current Pastor Martin Horn says.

This Norwegian plaque hangs in the Old Stone Church entry. Since I'm German and not Norwegian, I rely on Google translate to tell me this sign basically thanks God for food and drink. 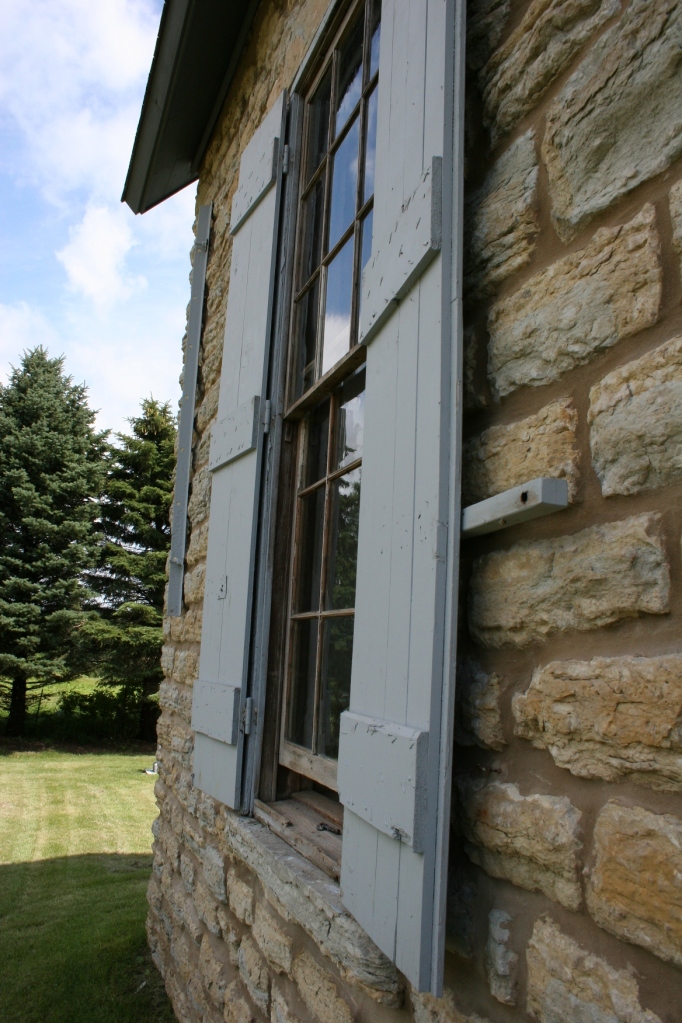 Six shuttered windows span two sides of the limestone church. The shutters are thrown open for the once-a-year church service and then battened shut.

The Old Stone Church cemetery, a final resting place for generations past and for those yet to be buried upon this land in peaceful Monkey Valley near Kenyon, Minnesota.