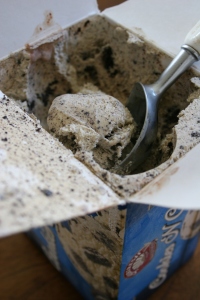 TERESA MAUER, move over. You’ve got competition on the playing field.

Here’s a replay of my shining moment:

“Do you want some ice cream?” I ask my guys. Silly question since I already know they’ll say “yes.” But I hope that, by inquiring, one of them will dish up the treat. Arm wrestling rock-hard ice cream really isn’t my favorite sport.

Clearly, the guys are not going to pinch hit for me. My teen is snuggled into a corner of the couch with his laptop. My husband has his feet up in the recliner watching America’s Got Talent.

So I head toward the kitchen, pull open the freezer door and consider the options. “Peanut Butter Brownie Sensation or Cookies ‘N Cream?” I shout.

Of course, they both want the Blue Bunny “peanut butter ice cream loaded with brownie chunks and a chocolate peanut butter swirl.”

“There’s not much left,” I share, thinking maybe they’ll settle for the store brand of Oreo-laced vanilla ice cream and I can have the remaining Brownie Sensation.

Nope, that game plan isn’t working, so I scrape the bottom and sides of the carton, evenly distributing the ice cream into three bowls. (Well, I do cheat some and give myself a little bit more. But who’s watching?)

Next, I lift the flaps on the Cookies ‘N Cream box, edging the tip of the ice cream scoop into the hard, hard ice cream.

Then, just as the ice cream molds into a ball, it releases. It’s a hit. The ice cream ball flies up, grazes the watch on my left wrist and lands at the edge of the kitchen sink, nearly rolling into clean silverware stashed in the dish drainer.

I’m stunned. But I react swiftly, grabbing and tossing the ball into a bowl.

I share none of this with the team…until later, when my husband and I are watching the 10 p.m. news. Our son is gone by then, star-gazing at his astronomy class.

During a commercial break, I watch as Teresa Mauer, mother of Minnesota Twins player Joe Mauer, scoops ice cream. Then, just like that, the ice cream releases from the scoop and flies across the room. Joe lunges and catches the ice cream ball in his bowl.

My jaw drops. I have never seen this Kemps’ “Got It” television spot. Yet…

“That just happened to me,” I say, detailing to my husband exactly what occurred in our kitchen 1 ½ hours earlier.

“Yeah, except you didn’t have Joe Mauer there to catch it,” he replies. “You just picked the dirty ice cream off the floor and put it in my bowl and figured I wouldn’t notice since it’s Cookies ‘N Cream.”

Bottom line, I love this “Got It” ad. It’s short, sweet (catch that?), and absolutely believable.