IF BEAUTY CAN BE FOUND in floodwaters, then today I discovered it in these images I composed of Faribault Foods’ offices along Second Avenue N.W. across from the Rice County Historical Society. 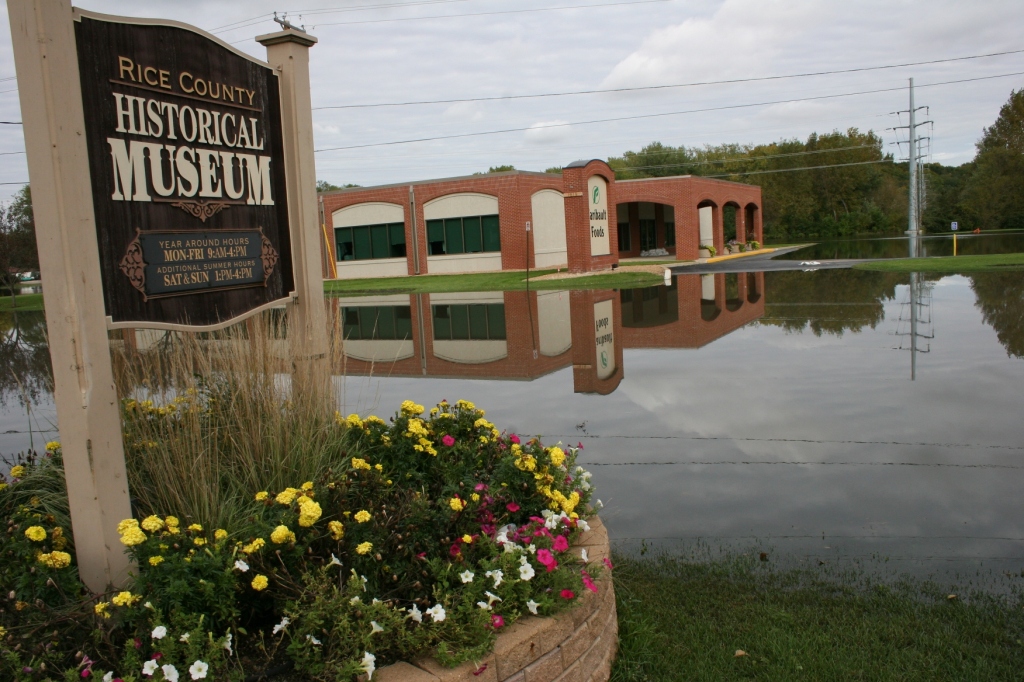 Faribault's September 2010 flood will go down in the history books.

With “just right” lighting, with the building and landscape and sky reflecting upon the water in the flooded street, the scenes seem almost surreal. My unedited photos possess a serene quality that belies the angst the floodwaters have caused for residents and business owners and government officials. 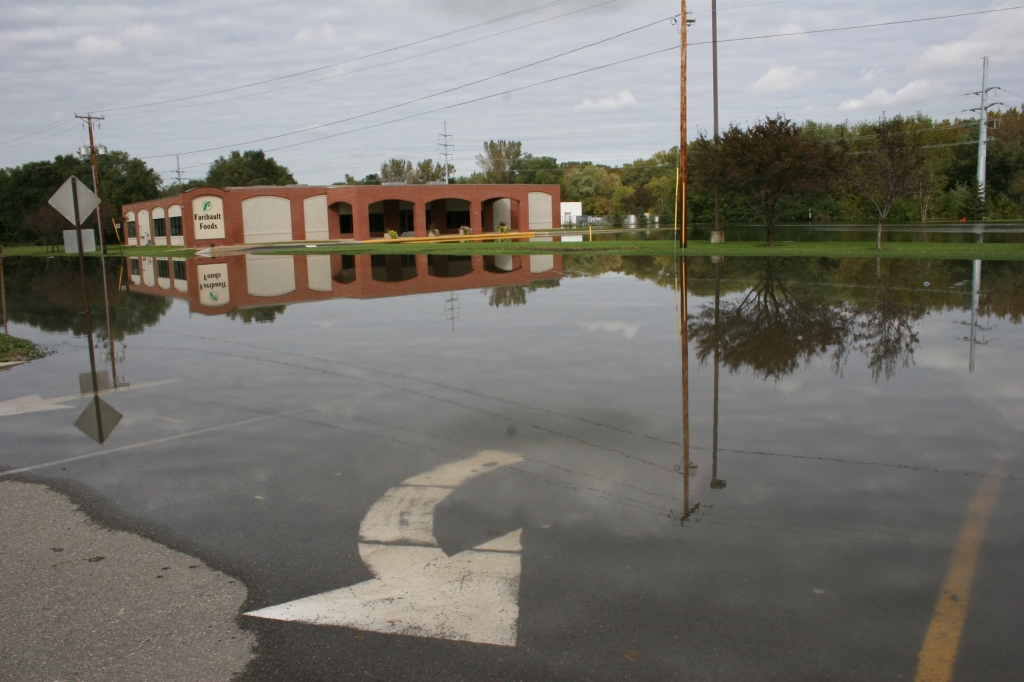 Just across the street, a resident pumped 3 ½ feet of raw sewage from his basement.

But you would never think that, viewing these images, this flood art.

The light and reflection create a surreal image of Faribault Foods. 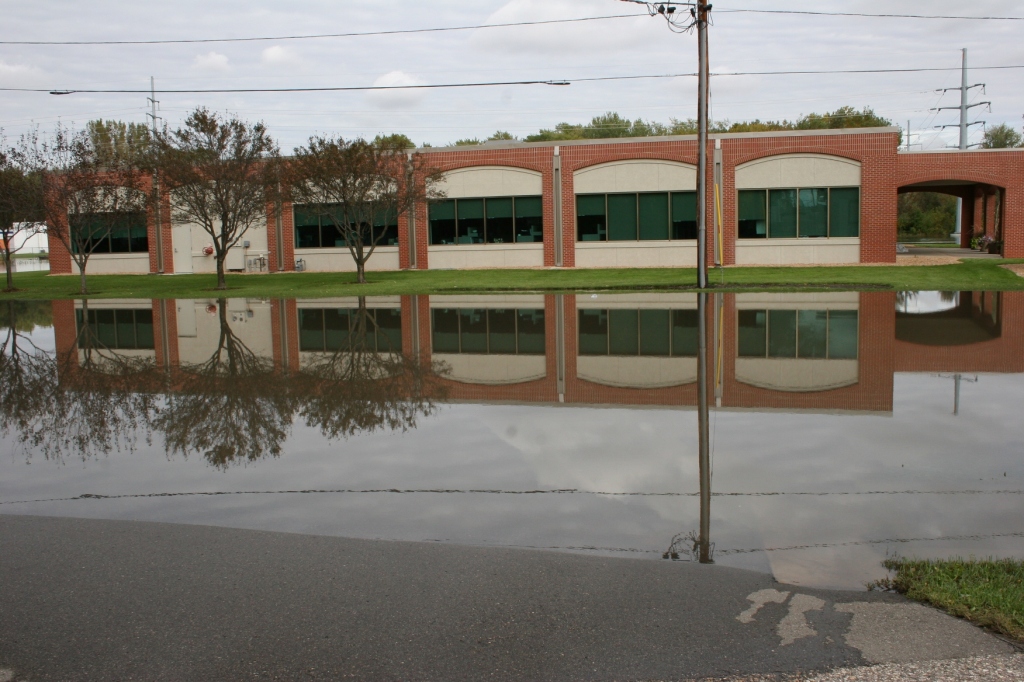 This is my favorite image of the Faribault Foods' office. To me this appears more a painting than photo.

Angling in the rushing floodwaters of the Cannon River 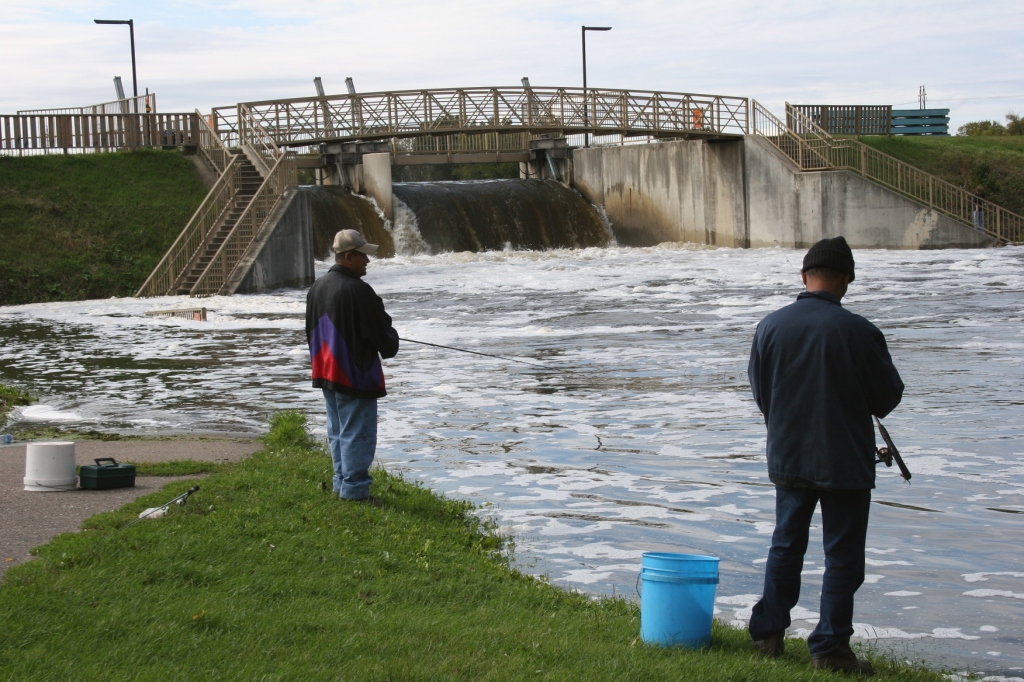 Fishermen angled for fish in the swollen Cannon River at the King Mill Dam in Faribault Saturday afternoon.

BROTHERS DYLAN AND PARKER and their friend Doug are way braver than me.

No way would you catch me angling for fish along the churning Cannon River at the King Mill Dam in Faribault today. Watching the water tumble and swirl, hearing the rushing roar, made me nervous. But seeing the boys standing so close to the dangerous river, tossing their lines into the mayhem as if they didn’t have a care in the world, caused me even more anxiety. 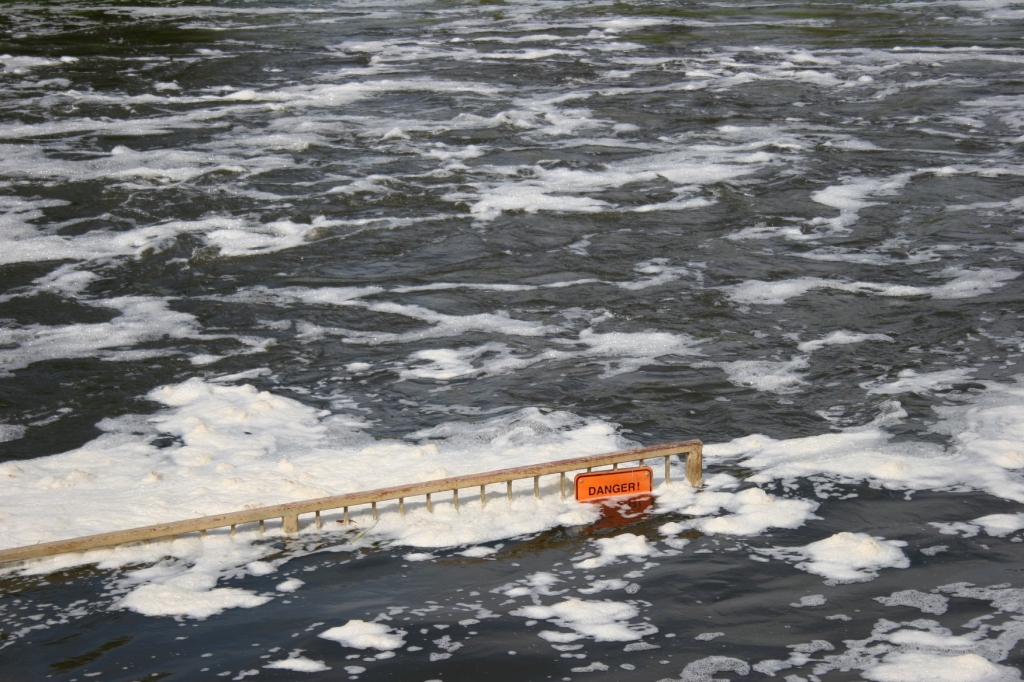 Only the top parts of a warning sign and of a sidewalk rail peeked above the high water at the dam site.

I was concerned, enough to ask if their moms had given them any special instructions before they left home.

“Watch the speed of the water,” said 14-year-old Dylan.

I suppose the boys thought they were cautious enough, and they really weren’t careless. But one slip on the steps where they fished, or one misstep from the bank, and they would be carried away by the swift-moving waters. 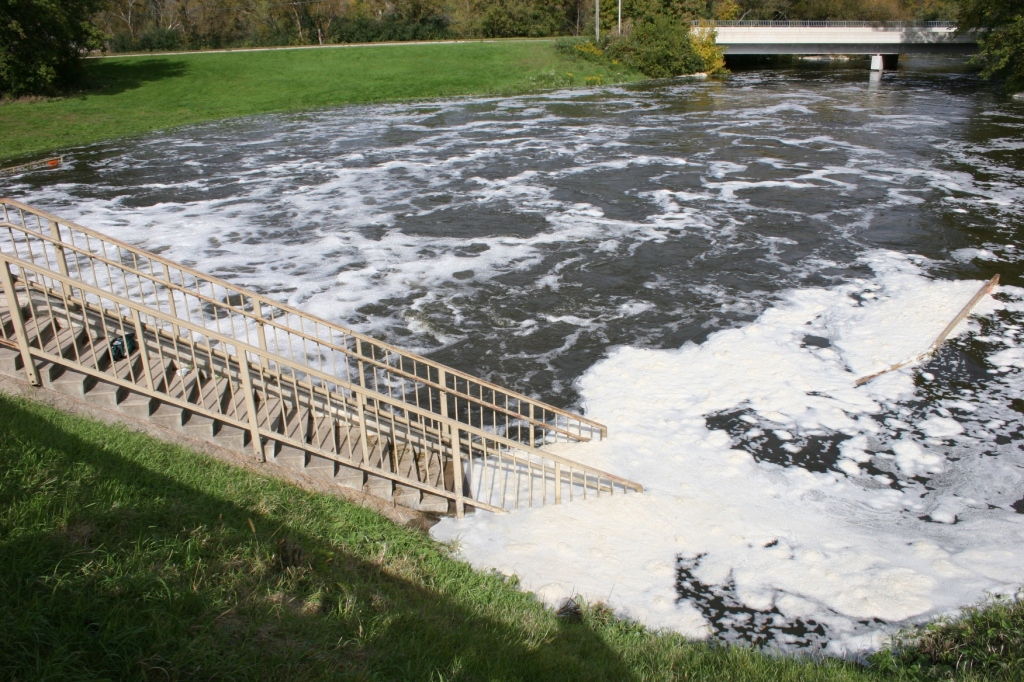 Part of the stairway and sidewalk were submerged in the Cannon River. The boys fished at the bottom of the stairs. 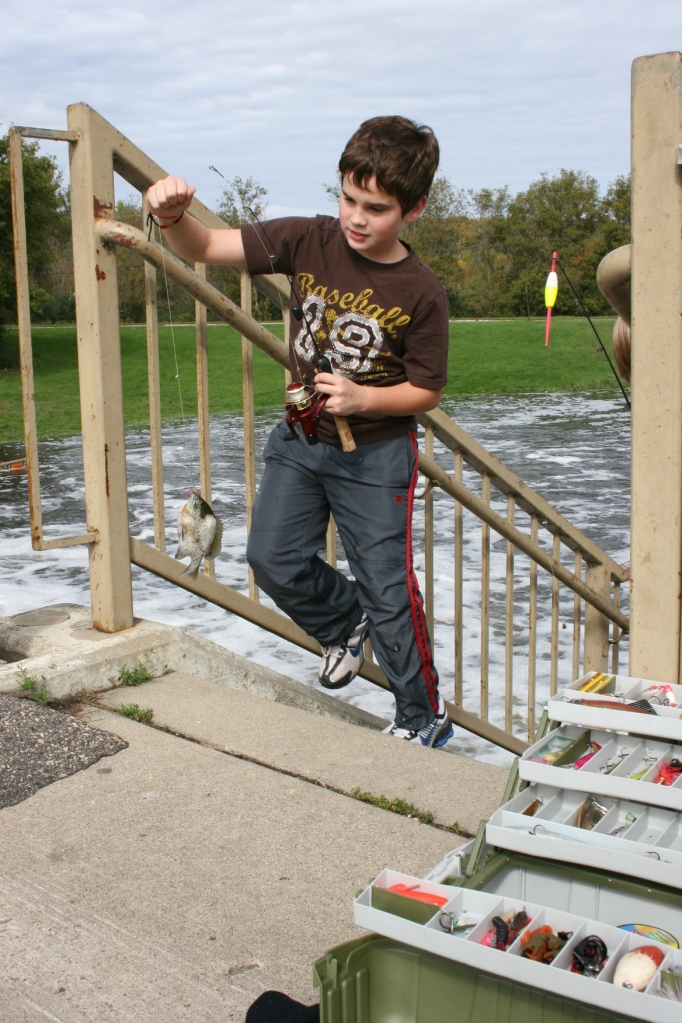 Parker climbed the stairs to the top of the dam with his catch, a sunfish.

I tried not to dampen their spirits; they seemed so content—three boys fishing away a Saturday afternoon, reeling in bass and perch and sunfish. But I wanted them to know, in a subtle way, that I cared about their safety. 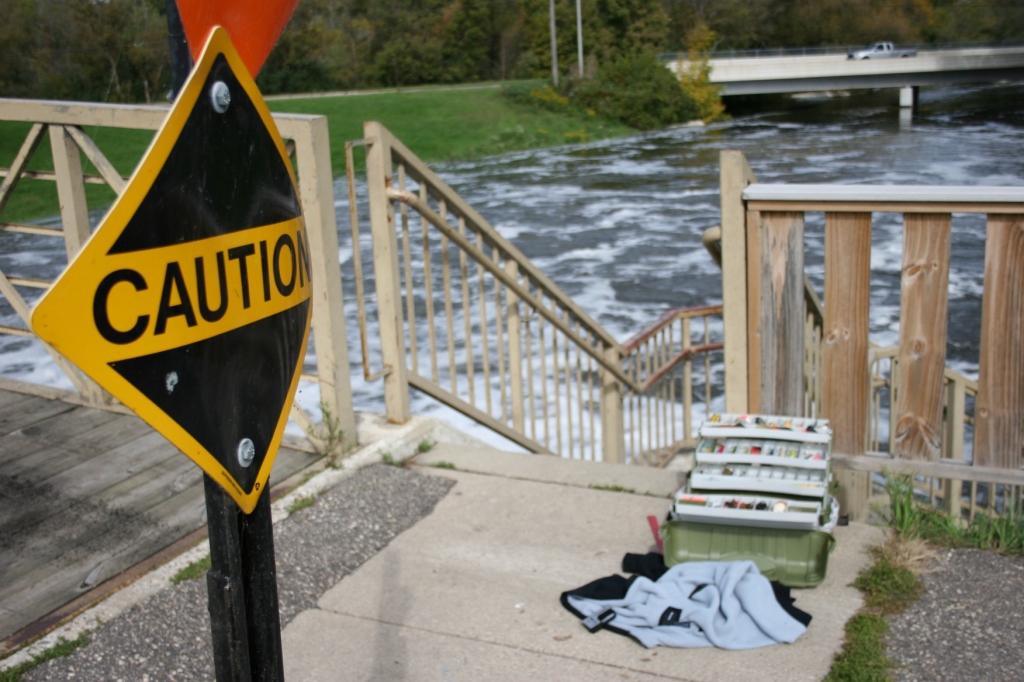 A sign at the top of the dam walkway and stairs cautions anglers and others. 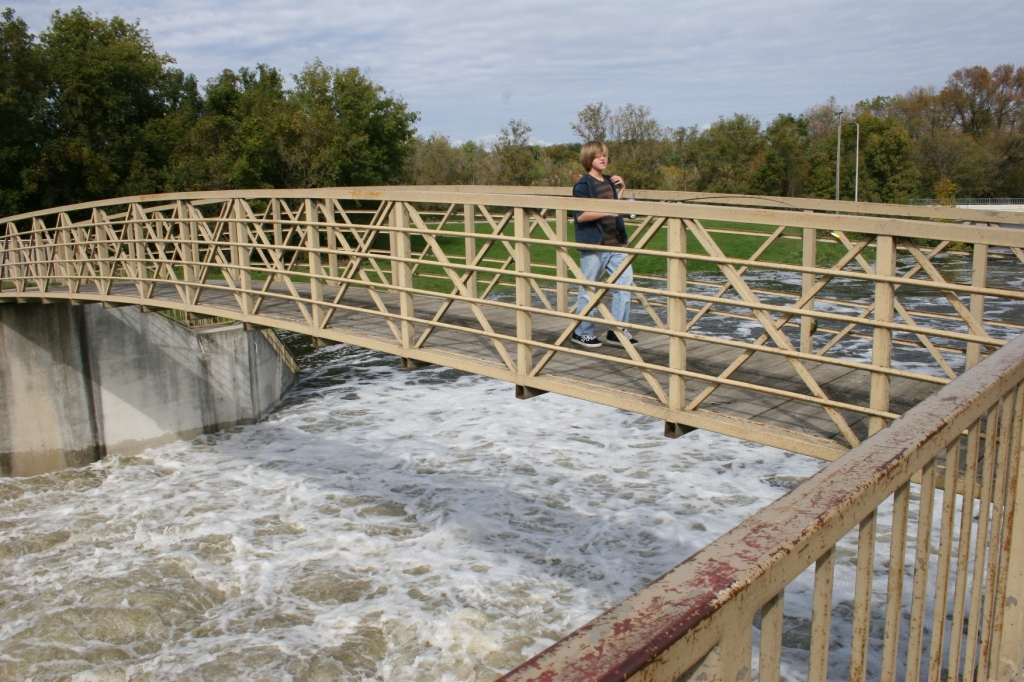 Doug crosses the bridge over the King Mill Dam as the river rages below. 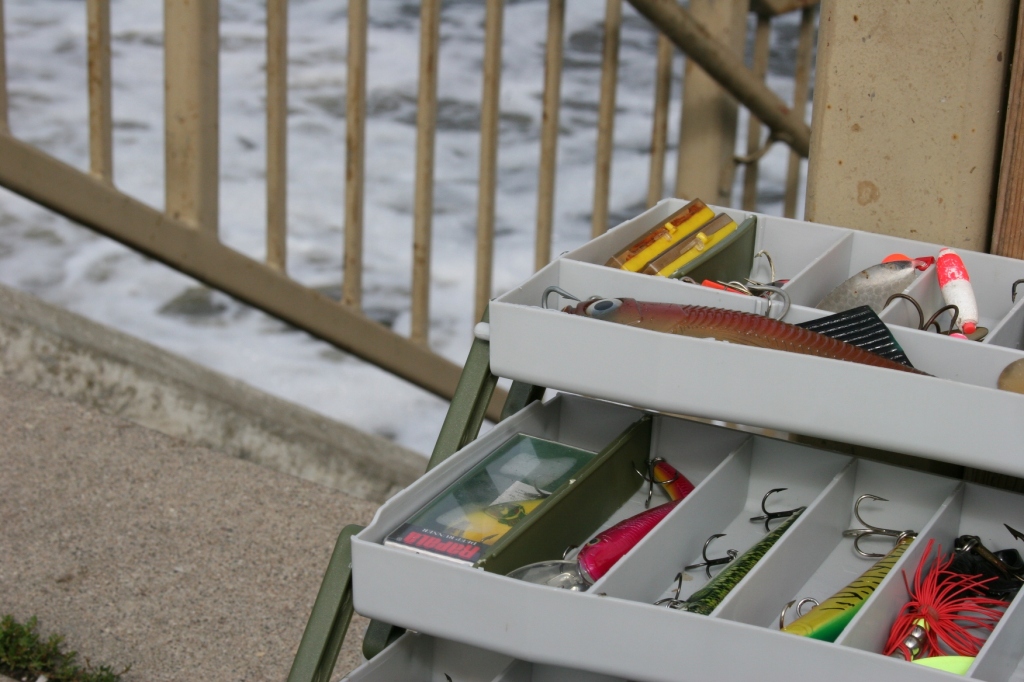 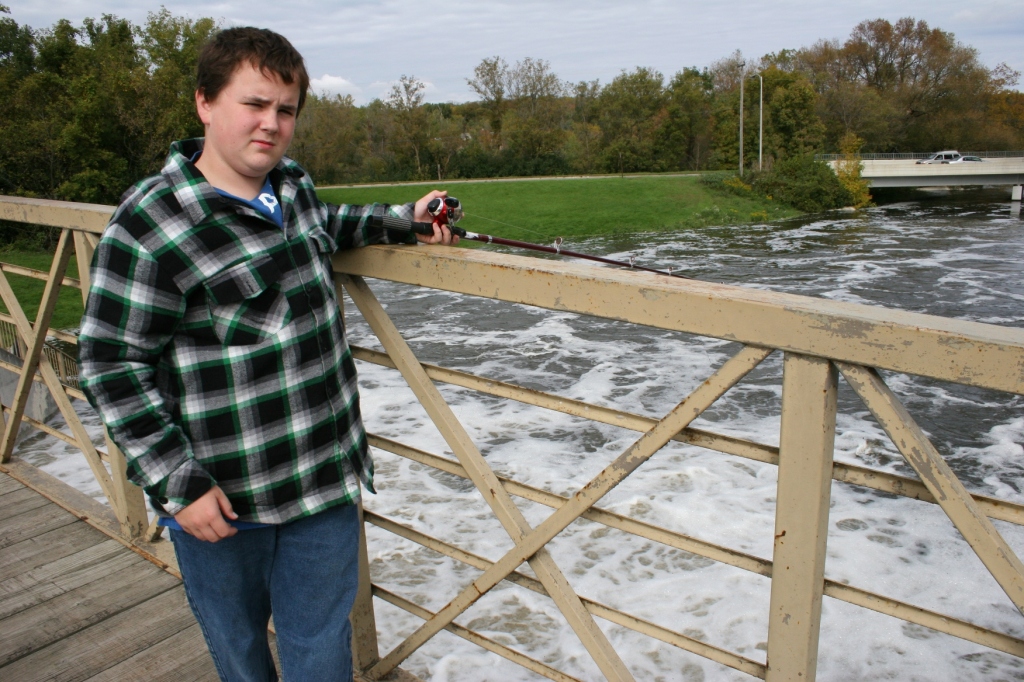 I didn't worry quite so much when Dylan fished from the footbridge across the top of the King Mill Dam.

Visit Christdala Church for worship, art and a history tied to outlaws 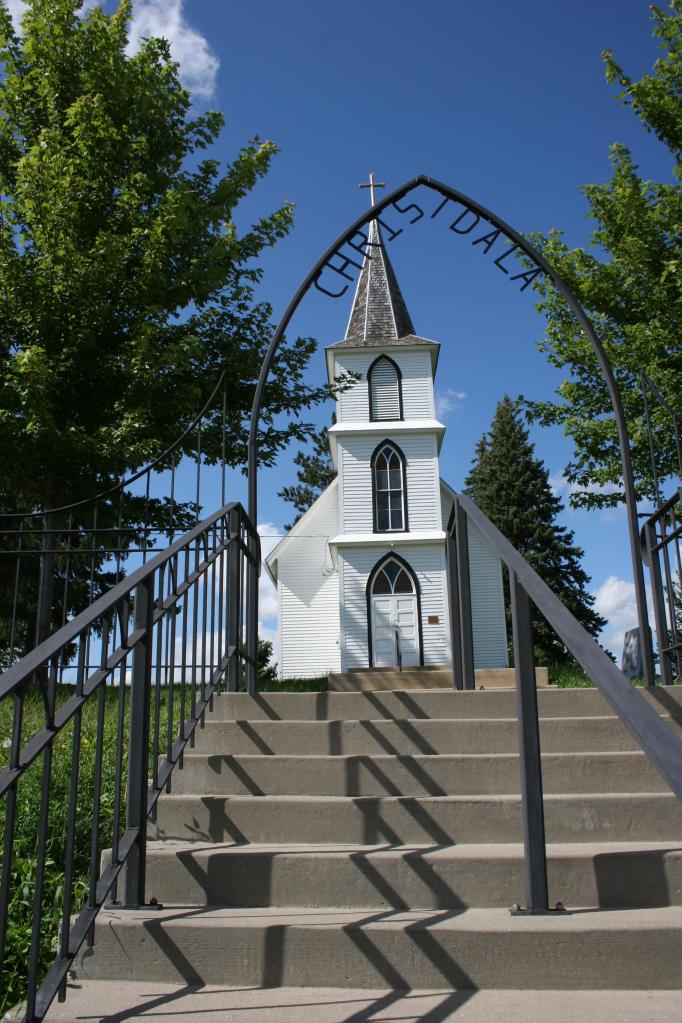 I DOUBT ANY OTHER MINNESOTA church can claim roots in a notorious attempted bank robbery. But Christdala Evangelical Swedish Lutheran Church of rural Millersburg can.

The long-dissolved congregation traces its origins back to the September 7, 1876, attempted robbery of the First National Bank in nearby Northfield. During that failed crime, Nicolaus Gustafson, a Swedish immigrant from Millersburg, was shot point blank in the head by outlaw Cole Younger. He died four days later and was buried in Northfield because the Millersburg Swedish community didn’t have a graveyard, or a church.

The evening of the bank robbery, the Swedish immigrants met to talk about constructing a church and soon thereafter built Christdala.

This Sunday, September 26, the Christdala Church Preservation and Cemetery Association will open the doors to this historic church which sits high atop a hill overlooking Circle Lake just west of Millersburg along Rice County Road 1. On this roadway that passes by the 1878 country church, the James-Younger Gang fled after the botched Northfield raid. 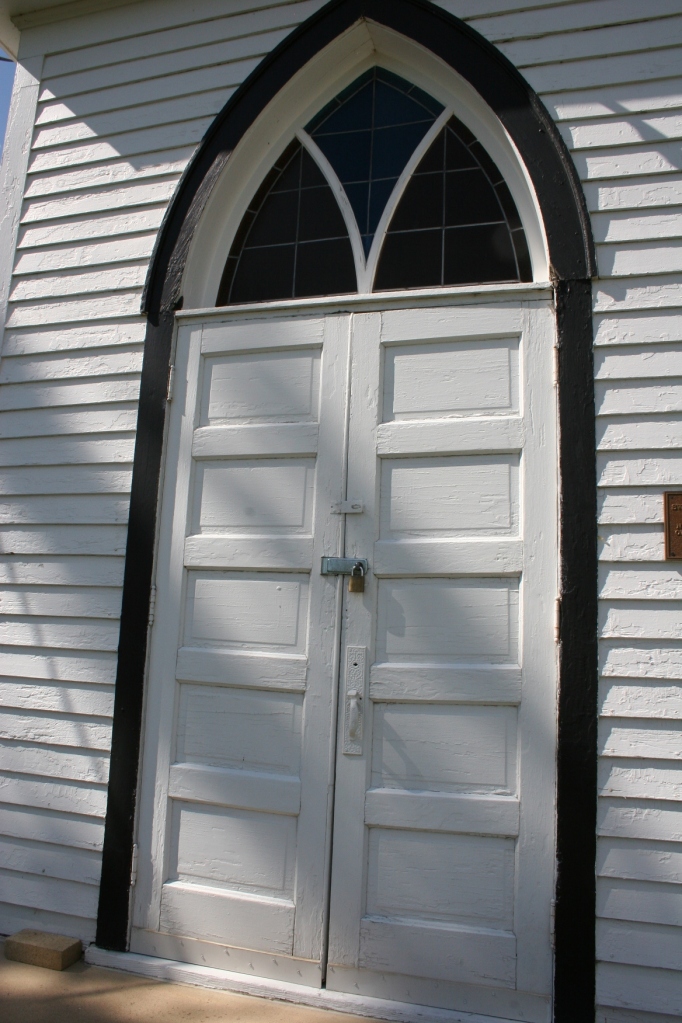 The doors to Christdala, which is on the National Register of Historic Places.

I’ll be there Sunday for the 2 p.m. fall worship service led by the Rev. Ralph Baumgartner, pastor of Galilee Evangelical Lutheran Church in Roseville, who has family ties to Christdala. I’m anxious to get inside this sanctuary, which I’ve only viewed through the slats of Venetian blinds while photographing the locked building on a Sunday afternoon in July. 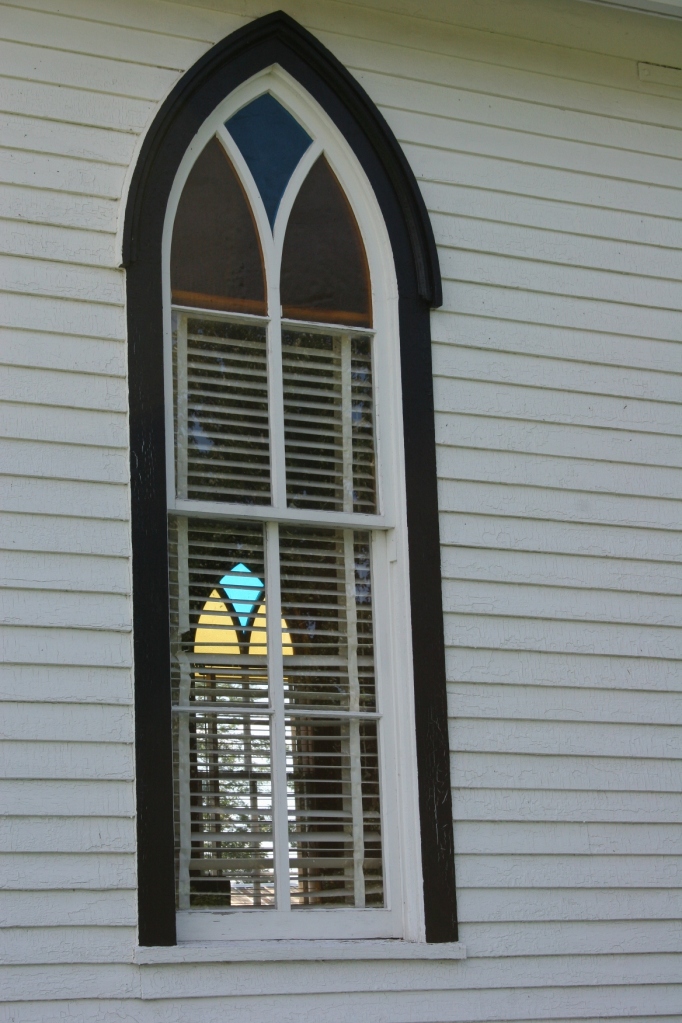 I've only peered through the blinds into the sanctuary.

This Sunday I’ll arrive well before worshipers and the curious and the families with a connection to Christdala. I’ll arrive with a van full of paintings by my 92-year-old artist friend, Rhody Yule of Faribault. Rhody, who has been creating art for 76 years, did an oil painting of the church in 1969. He’s showing that piece and eight other religious-themed works at Christdala’s open house.

He’ll talk a bit. I’ll talk a bit. But mostly, we welcome visitors to pause and study the paintings, to feel the emotions painted into the faces of the disciples, of Christ, of a woman in reverent prayer. Rhody paints with a heart of faith reflected in his art. 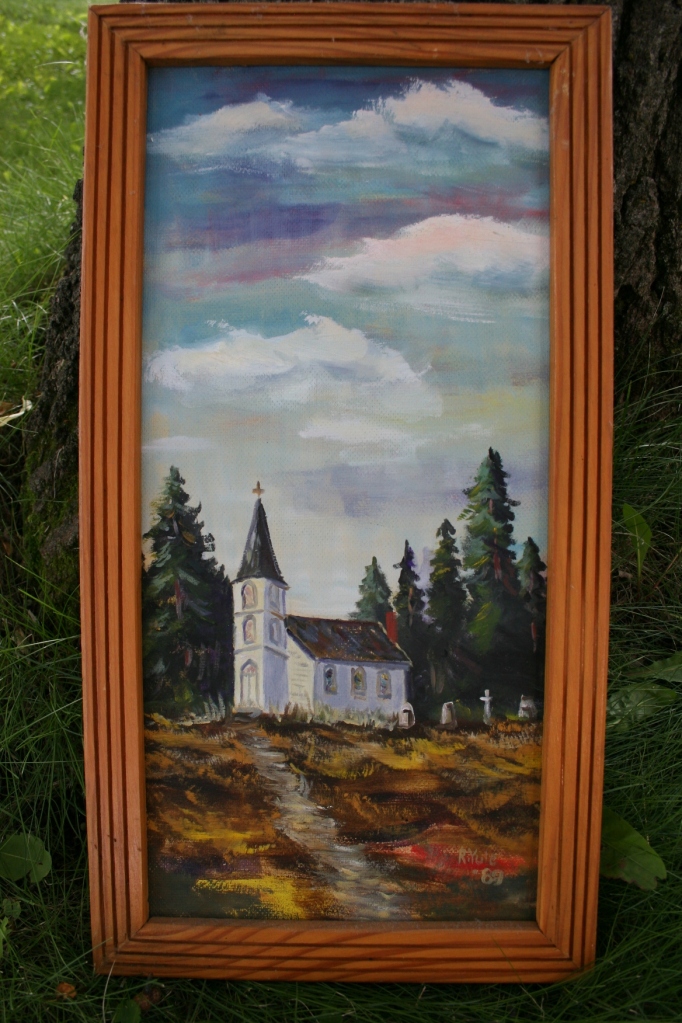 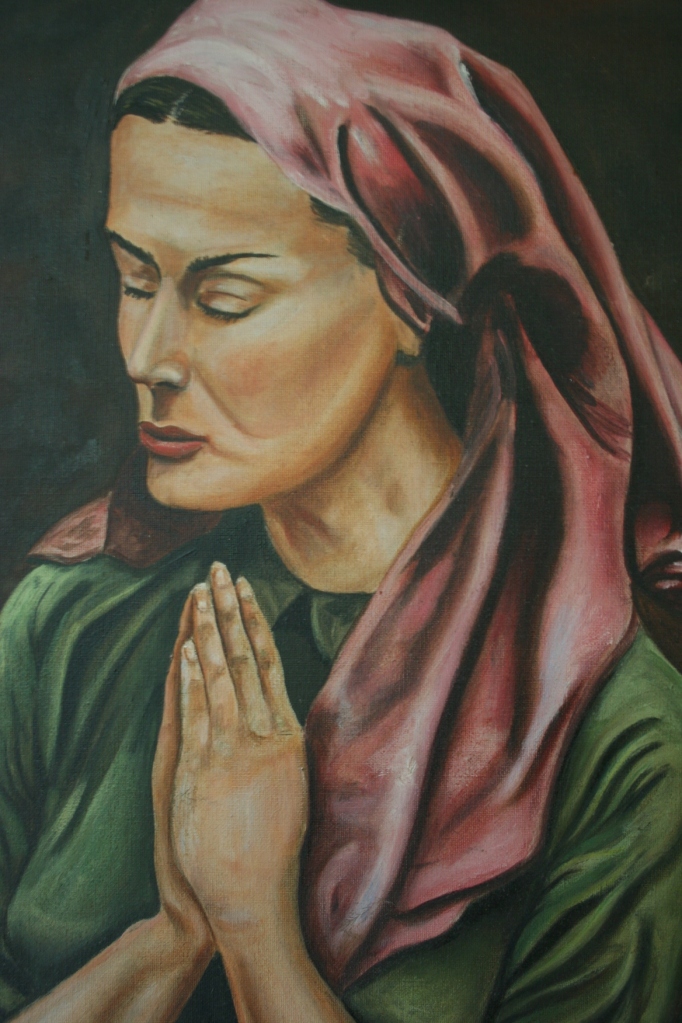 A snippet of Rhody Yule's painting, one of nine he will show at Christdala.

Christdala visitors can also pick up a copy of God’s Angry Man—The Incredible Journey of Private Joe Haan by B.Wayne Quist. The newly-released book tells the true, powerful life story of Haan (Quist’s uncle), who grew up in an Owatonna orphanage and who served in Patton’s Third Army during WW II. Quist, a member of the Christdala Preservation Association, will donate profits from Sunday’s book sales to Christdala.

Copies of the fall issue of Minnesota Moments magazine, featuring my photo essay on country churches, will also be on sale with a portion of the proceeds benefiting the church. 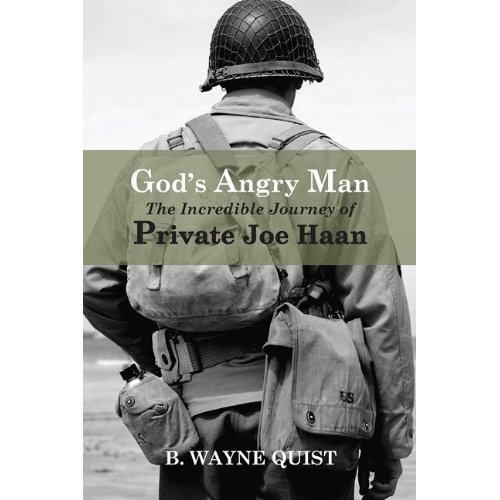 B. Wayne Quist will sell copies of his latest book, God's Angry Man.

Before and after the worship service, visitors can tour the 1881 Millersburg School, which the Christdala preservation group has refurbished and is transitioning into a community museum. Exhibits include church and school records, photos, military medals and records, Indian artifacts, an old doctor’s buggy and more. Faribault genealogist and preservation member John Dalby will be at the schoolhouse to answer questions. 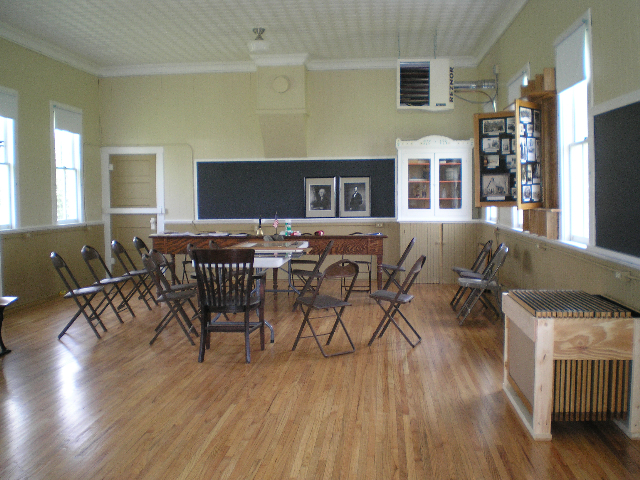 The Millersburg School has been refurbished and will feature exhibits tied to local history.

Sunday promises to be an interesting day for those who gather at Christdala. It will be a day of history and of art, of worship, of thoughtful remembrances at gravesites, of families reuniting and of others simply coming together on this spot, this Christdala, this “Christ’s Valley,” here where the outlaws once escaped on their galloping horses. 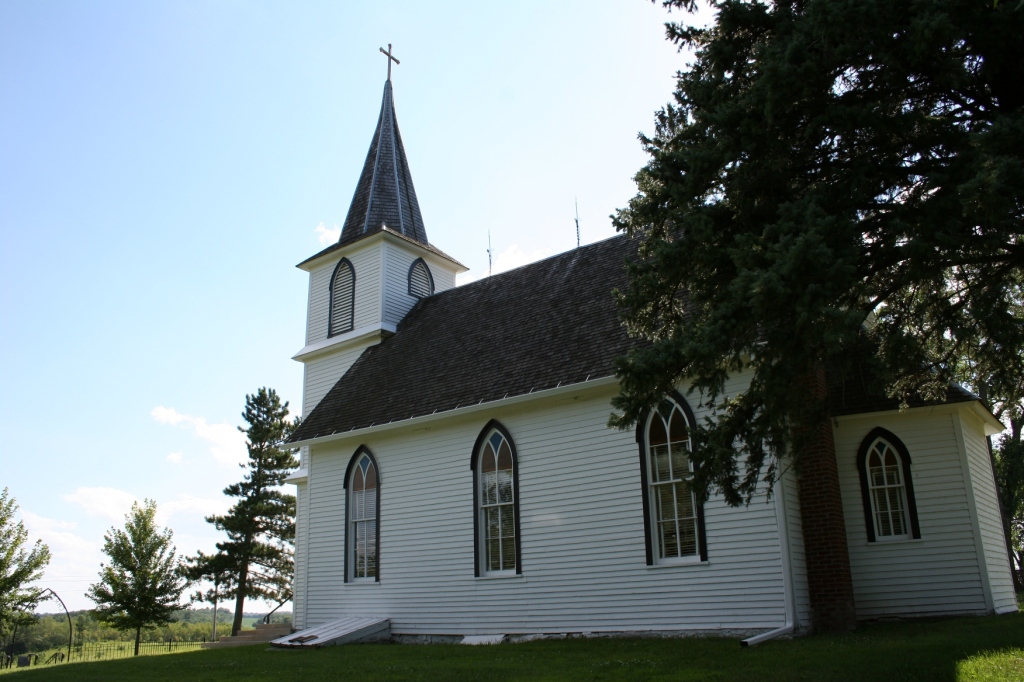 A side view of the 1878 Christdala Swedish Lutheran Church.