Through the trees and looking down into flooded Hammond, you can see the top of Dallas and Vicki Williamson's house "in" the Zumbro River. Carrie Hofschulte took this photo.

I’M TAKING A BREAK today from sharing flood survivor Tina Marlowe’s experiences to tell you about another family affected by the September 2010 flash flood in southeastern Minnesota during this, National Flood Safety Awareness Week.

Sheri Ryan of Goodhue contacted me shortly after I posted the first in my six-part flood series. She had flood photos and wanted to know if I was interested in posting them here. Once I saw Sheri’s images and read her email, I knew, without a doubt, that these photos and this story needed to be shared.

Sheri is the daughter of Vicki and Dallas Williamson, whose 1881 home in Hammond was heavily-damaged by the floodwaters. The couple is not returning to this Zumbro River community and has relocated 35 miles away to an 1882 farmhouse atop a hill in rural Cannon Falls.

Sheri’s photos are powerful. Upon viewing these images, I was instantly reminded of the pictures my second daughter took while volunteering with clean-up after Hurricane Katrina.

Although the number of individuals affected by the flash floods in Minnesota last fall pales in comparison to Hurricane Katrina, the impact is no less significant. Lives have been thrown into upheaval and chaos in the aftermath of such a devastating natural disaster.

Sheri says her mom is still mourning the loss of her home in Hammond.

“My mom is completely devastated from losing their home and all that was ‘tossed out on the street’ for the loaders to take away, and all that was washed down the river–her beautiful garden, grandsons’ toys, her parents’ stuff/photos, memories…she said the other day that she ‘just wants to give her house a hug’.”

For now, the future of that house is uncertain. The Williamsons won’t be back. But they must decide whether to elevate the house four feet (to be above the 100-year flood plain), tear it down or move it. If they go with a buy-out plan, the house must be torn down and nothing can be built there again.

They had flood insurance, but that did not cover the costs of purchasing the 1882 Cannon Falls area farmhouse.

“…there have not been many decisions yet,” Sheri says. “She (mom) just cannot go through this again. She said it is like a death…a loss…maybe she is still in mourning?”

We would all be wise to remember, as spring flood season approaches, our Minnesota neighbors like Vicki who are still struggling to recover from the floods of nearly six months ago.

Another shot of the Williamsons’ flooded home. Photo by Susie Buck 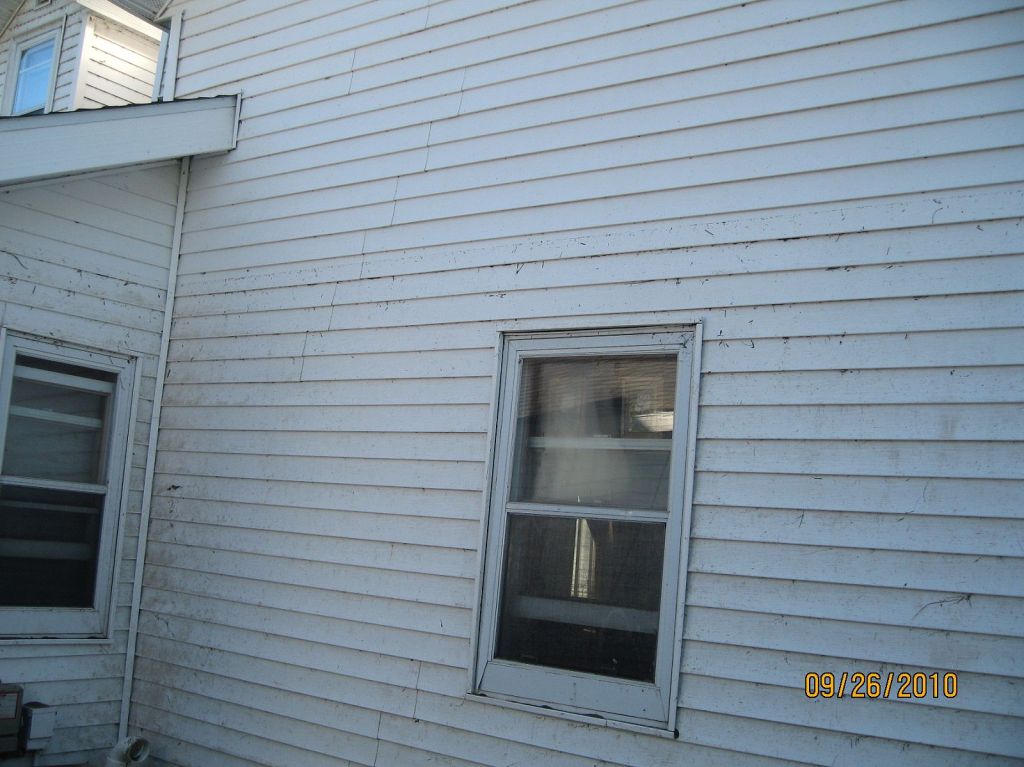 Above the window you can clearly see the water line marking the height of the floodwaters on the Williamson house. They had just power-washed the house two days before the flood. Sheri Ryan photo.

A day after the floodwaters subsided, you can barely tell that 9 feet and 8 inches of water once surrounded the Williamsons' house. The freezer near the back door had been inside the garage and was moved by floodwaters. Fifty freshly-butchered chickens were scattered across the yard and garage. Vicki Williamson lost all of her freshly-frozen tomato sauce also. The family had to dispose of the rotting food quickly into containers to keep coyotes and other critters from scavenging. Photo by Sheri Ryan

The first day back into their flooded home, the Williamson family had 20 minutes to grab whatever they could carry on the back of a four-wheeler. Photo by Sheri Ryan.

In the Williamsons' bathroom, a layer of muck covered everything. Floodwaters peeled the wallpaper off the walls. Photo by Sheri Ryan.

Flood-damaged debris collected in the Williamsons' front yard. Says Sheri Ryan, "My mom called me on Wednesday just in tears, bawling because they were taking away all of her stuff with pay-loaders." Photo by Sheri Ryan.

This photo by Carrie Hofschulte shows the Zumbro River raging across the bridge that connects east and west Hammond on Wabasha County Road 11.

Sheri Ryan shot this image of the same bridge, above, when the water had returned to its almost "normal" level.

THANK YOU to Sheri Ryan and Carrie Hofschulte for sharing these incredible photos.

Check back tomorrow for Part IV in my flood series from Hammond.