An old-fashioned grocery store, moosehead and all, thrives in Ellendale August 5, 2011

In the small town of Ellendale, kids bike to Lerberg's Foods for groceries and the occasional slushie. Here two sisters and a friend slurp their slushies while sitting on bags of water softener pellets next to the pop machine.

WHEN ANDREW LERBERG bagged a moose in northern Minnesota in 1919, the animal was brought by rail to Ellendale and the moosehead proudly displayed in the family’s grocery store.

Ninety-two years later, that moosehead still hangs at Lerberg’s Foods, above a framed photo of Andrew with his trophy and above processed fruits and vegetables stacked on grocery store shelves.

Look down the grocery aisle to your left and you'll see the moosehead that is part of Lerberg's lore.

Ross Sletten, who purchased the business in 2007 from Andy Lerberg, will tell you the moosehead came with the store and that originally the rifle used to shoot the animal rested in its antlers. Not any more. Times have changed.

But not everything has changed at Lerberg’s. The original tongue-and-groove maple floor, tin ceiling, small-town-friendly atmosphere and more speak to the history of this 1914 brick building and to the long-standing grocery store owned by three generations of Lerbergs—Andrew, who started the business (in another building) in 1901, Arthur and Andy. 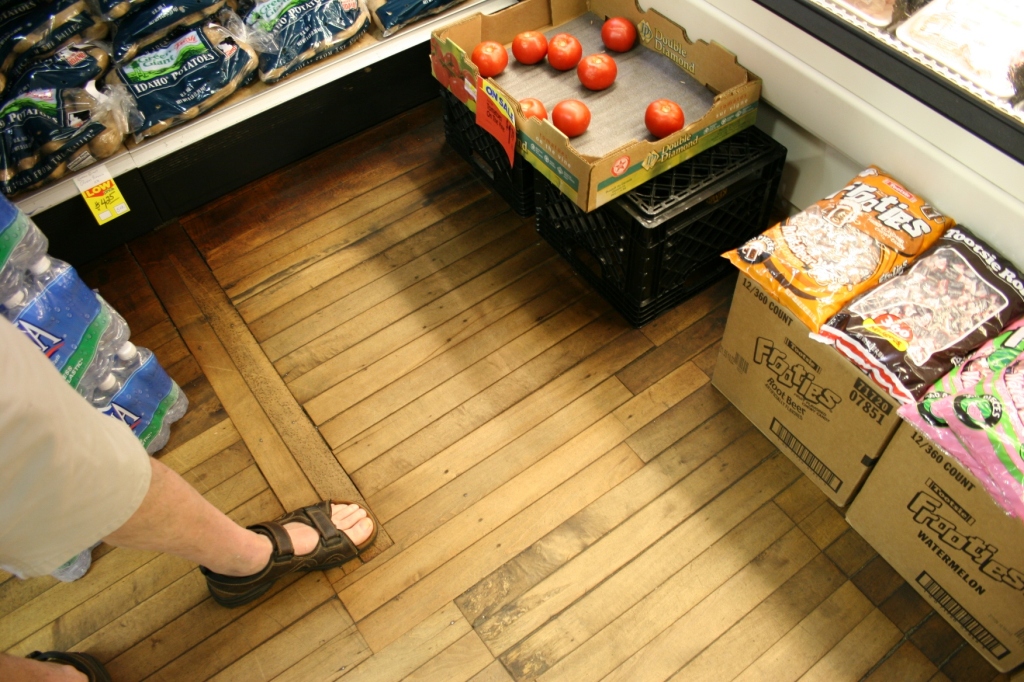 The original tongue-in-groove maple floor in front of the meat counter. 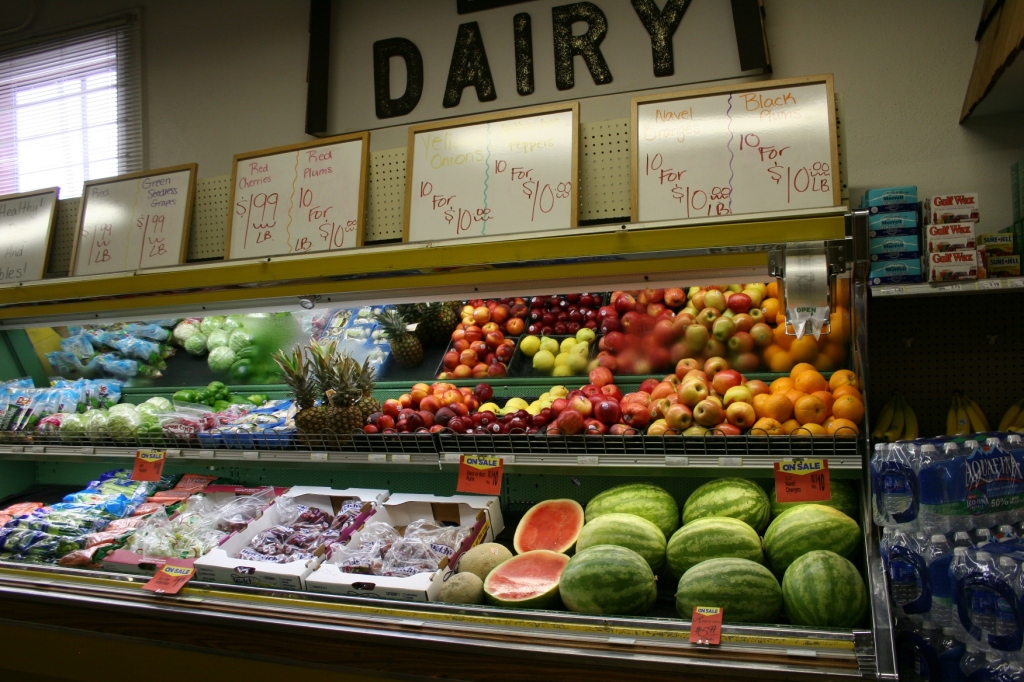 The produce department of Lerberg's Foods.

Ross began working at Lerberg’s in 1976 and, on a recent Sunday, three of his five kids—Brett, 18, Cassidy, 14, and Noah, 12—were all working at the store that anchors a corner of the main street in Ellendale, population around 600.

This long-time employee, now owner/manager, is clearly proud of his grocery store, which he claims is the oldest grocery store in Steele County and the second oldest in Minnesota.

That’s easy to believe when you walk upon the worn tongue-and-groove floor between the narrow aisles—of which there are three—pause to appreciate the tin ceiling, and listen to Ross. He’ll tell you about the tailor who had a shop in the store’s current-day upstairs office or about the eggs, ducks and chickens locals once traded for goods.

He’ll point out the store’s original coffee grinder resting on a shelf above the dairy section or direct your attention to the original wooden butcher block back in the meat department and still in use today (grandfathered in, he says). 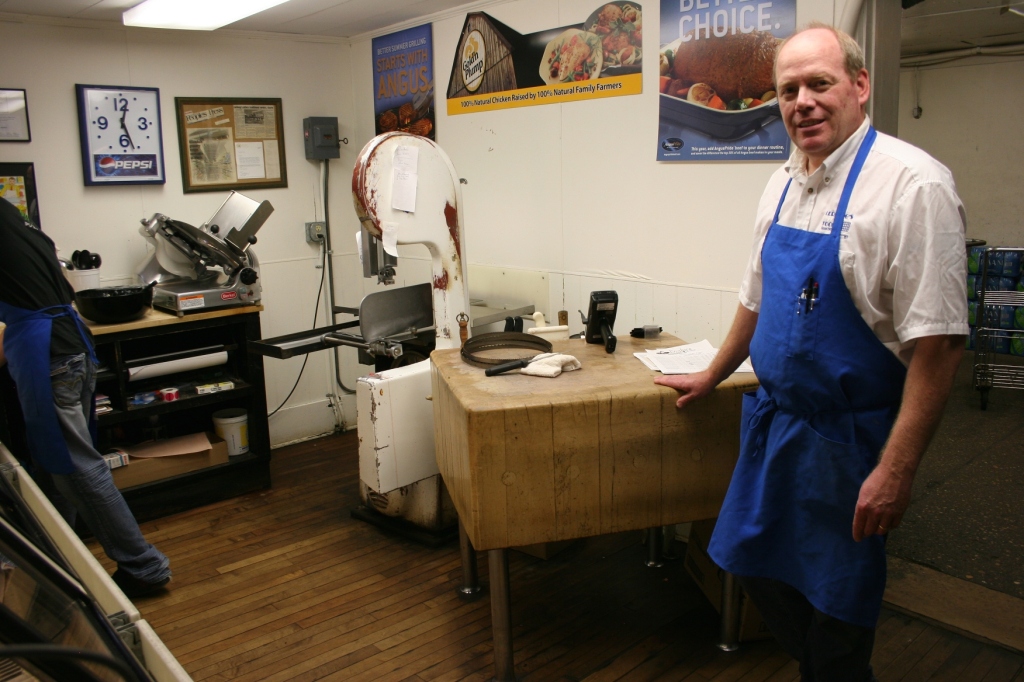 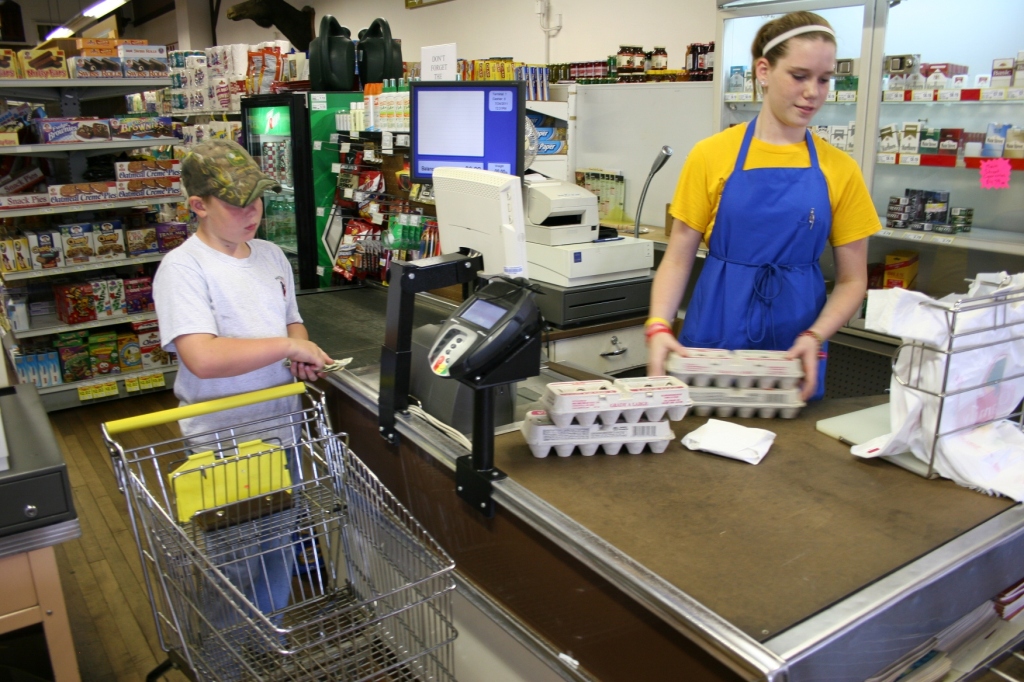 Cassidy Sletten, 14, checks out groceries on a Sunday morning.

He runs a business which, on a Sunday morning, teems with customers—folks picking up a few groceries after church, kids treating themselves to slushies from the machine at the front of the store, a 9-year-old purchasing several cartons of eggs for his mom, a guy buying three bags of water softener salt.

Located just the right distance (meaning too far) from Albert Lea, Austin, Owatonna and Mankato, the store draws customers who will shop locally rather than drive to regional hub cities, Ross says. He can offer competitive prices, he says, through his supplier, Nash Finch.

A street-side sign in Lerberg's front window thanks customers for their patronage.

Already, 12-year-old Noah Sletten is thinking about his future and maybe someday taking over the business. “I think it would be kind of fun to own something old,” Noah says, then smiles.

For someone like me, who grew up in rural southwestern Minnesota and frequented a grocery store with tongue-and-groove floors, a tin ceiling, a candy counter (where I bought my favorite Bazooka bubblegum for a penny), a toy rack and groceries lining two aisles, discovering Lerberg’s Foods brought back so many memories. I couldn’t get enough of this old-time style store.

The only thing missing, I told 14-year-old check-out clerk Cassidy Sletten before leaving her family’s store, was the old-style screen door that would bang behind me. She gave me a puzzled look.

“Ask your dad,” I said, smiled, and walked out the door.

Candy at the end of a check-out counter tempts kids. There are peanuts for the adults. 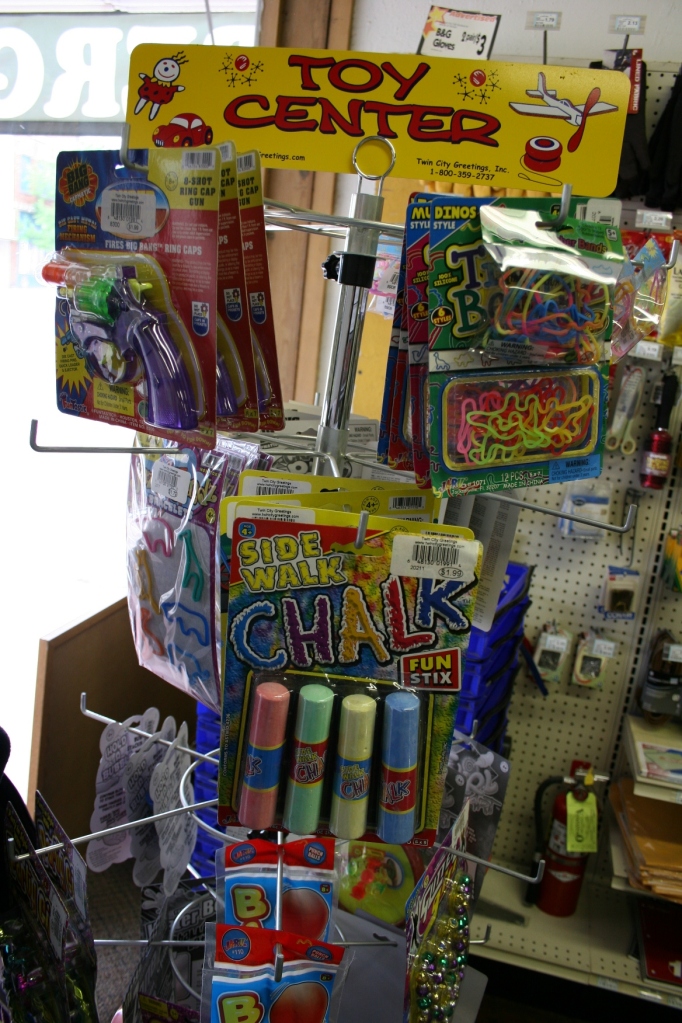 And right before you walk out the door, you'll see this strategically-placed rack of toys.

A side view of the grocery store looking toward the main street through Ellendale. A customer is carrying a bag of water softener pellets, stacked in front of the pop machine. The slushie slurping kids had to temporarily give up their hang-out spot so he could grab three bags of salt.

14 Responses to “An old-fashioned grocery store, moosehead and all, thrives in Ellendale”