DRIVE INTO MONTGOMERY or New Richland, Ellendale or West Concord, or many small Minnesota towns, and you’ll find grassroots art, my term for Main Street murals.

It’s art that’s out-front and public, depicting the history and feel of a community.

Such murals typically offer a visual snapshot of the past, impressing upon visitors and locals a defined sense of place.

In Ellendale, for example, a locomotive and depot comprise about a third of the 16-foot by 32-foot mural on the side of the Ellendale Café. The train points to the community’s roots as a railroad town, established in 1900 when the Burlington, Cedar Rapids and Northern Railroad passed through on its way to Minneapolis. Ellendale is named after the railroad president’s wife, Ellen Dale Ives, known for her humanitarian works. 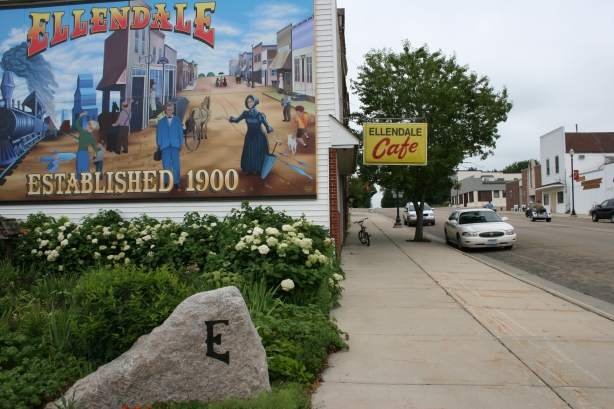 The Sweere brothers of the Twin Cities-based National Mural Company and natives of nearby Owatonna painted the 1999 Ellendale Centennial Mural.

The mural, by the way, is just across the street from Lerberg’s Foods, an old-fashioned grocery store established in 1901 and complete with a moosehead on the wall. (Click here to read an earlier post about this must-visit grocery store.) 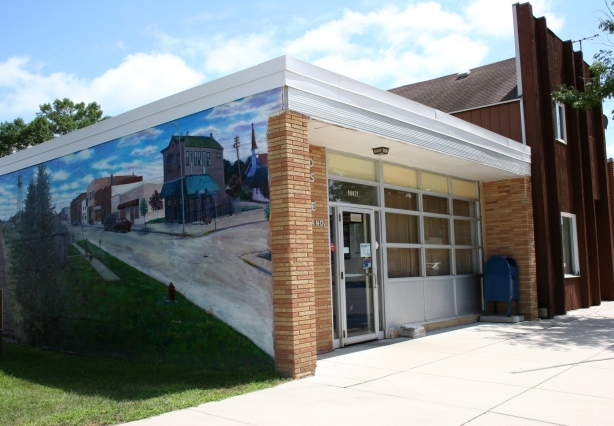 The city section of the mural stretching along the side of the New Richland post office.

In neighboring New Richland, the Sweere brothers also created the 12.5-foot by 65-foot mural brushed onto an exterior cement block wall of the post office. In this 2003 grassroots art, train tracks visually divide the mural into city and country scenes. It is a point this community emphasizes—not the division of the two, but the link between rural and town. Each July this Waseca County town of 1,200 celebrates Farm and City Days.

The rural portion of the New Richland mural.

Should you be interested in moving to New Richland, you might want to click here and check out this deal: The city is offering free land to individuals looking to build a new home in the Homestake Subdivision on the northwest side of town within a year of acquiring the deed. (Note that you’ll need to pay the special assessments.) Just thought I’d throw that land offer out there.

A 1950s version of West Concord is showcased in the mural on the side of a bowling alley.

To the east, over in West Concord, cars, not trains, define that town’s mural on the side of Wescon Lanes next to West Concord Centennial Park. The art depicts a 1950s street-scape, a nod to a community that celebrates summer with weekly car cruises and an annual West Concord Historical Society Car and Truck  Show in July.

Just down the street, you can shop at Woody’s Auto Literature and More.

Traveling back west over to Montgomery in Le Sueur County, you’ll spot a mural of Main Street just across from famous Franke’s Bakery, known for its kolacky (Czech pastry). Local sign-painter Victor Garcia painted the scene based on an early 1900s photo of this town founded by Czech immigrants.

A close-up shot of the Montgomery mural

So there you have it—abbreviated visual histories of four small southeastern Minnesota towns showcased in grassroots art. Think about that the next time you see a mural. 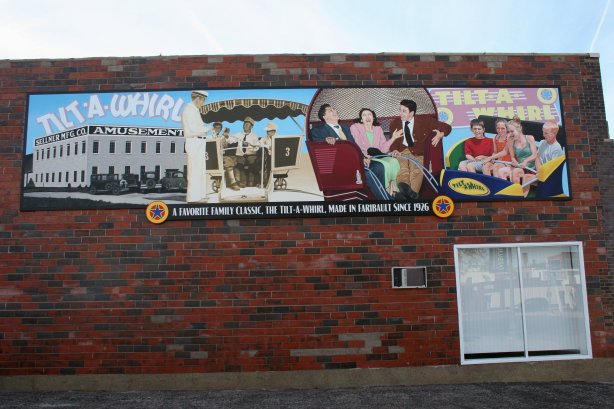 The Mural Society of Faribault created this mural honoring the Tilt-A-Whirl amusement ride, made in Faribault since 1926. Today Gold Star Manufacturing still produces the fiberglass cars for this ride.

DO YOU KNOW of any small towns that tell their stories via murals? In Faribault, where I live, five murals are posted on buildings in the downtown area. With a population of more than 20,000, Faribault isn’t exactly a small town, not from my perspective anyway. If you’re ever in the area, be sure to peruse the murals which depict differing aspects of this city’s history.