GROWING UP, I ALWAYS wanted to play the piano. But I never had the opportunity, although one Christmas I received a toy accordion that temporarily satisfied my yearning to create music.

There was neither money nor space for a piano within the budget constraints of a poor farm family or within the walls of a cramped southwestern Minnesota farmhouse.

And so the years passed without music.

During junior high school I struggled through required music classes, once fake-playing the ukulele at a Christmas concert because the music teacher failed to recognize that I could not read musical notes.

In high school when so many classmates were joining band, I was not among them. Remember that money issue? Still there.

A few years later my younger siblings were allowed to join band—one sister choosing the flute, the other the clarinet. The brothers focused on sports. For awhile I tried to play my sister’s flute, without much success.

During college, a friend allowed me to strum her guitar. The strings bit into my fingertips so I quickly lost interest.

Years later when I had children, I was determined they would have the musical opportunities I never had. I started them on a mini toy organ. Later, the eldest tried playing my sister’s flute for awhile, then quit. The second daughter borrowed my youngest sister’s clarinet, sticking with band lessons for several years. My son had no interest in an instrument until recently, when he inquired about playing the guitar. He’s meeting with a family member soon to try out guitar-playing.

I tell you all of this because of a recent musical opportunity that came my way. It’s ironic really, given my inability to play any type of instrument or, in fact, read a single musical note. If you put a song sheet in front of me right now, I’d stare at it like I was reading Greek. 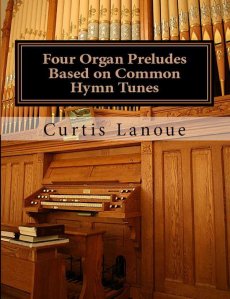 But composer Curtis Lanoue, also an elementary music teacher and the director of music at Lord of Life Lutheran Church in Miami, found the music in my soul. Seeking a cover photo for his 29-page Four Organ Preludes Based on Common Hymn Tunes book, Lanoue did an online image search and discovered my photo of the old pipe organ at Immanuel Lutheran Church, rural Courtland, Minnesota, the congregational home of my maternal forefathers.

“As you can imagine, there were a ton of (image) results,” Lanoue says. “Most of them were those flowery European organs in the cathedrals. That didn’t go too well with the style of the music. Somehow through the eye strain of looking through hundreds of photos, I found yours. It’s not surprising my eye was drawn to it as I was raised in a Midwest Lutheran church.”

Once I received a copy of this musician’s recently self-published book, I understood why he selected my photo of Immanuel’s organ that was built in 1895 by Vogelpohl and Spaeth Organ Company of New Ulm at a cost of $1,500.

It’s the perfect fit for Lanoue’s preludes based on the definitively Lutheran hymn, “A Mighty Fortress,” and on “Amazing Grace,” “Out of the Depths I Cry to Thee,” and “From Heaven Above to Earth I Come.”

As I flip through these compositions written by a musician with degrees in jazz performance and studio jazz writing and experience as a working organist since age 16, I can only smile at the contrast between his vast musical knowledge and talent and my musical illiteracy.

FYI: You can purchase Four Organ Preludes Based on Common Hymn Tunes for $9.99 by clicking on this link: https://www.createspace.com/3734555

Disclaimer: I am expecting payment for use of my cover image and have received a free copy of Lanoue’s book. This post, however, has been written solely at my discretion. 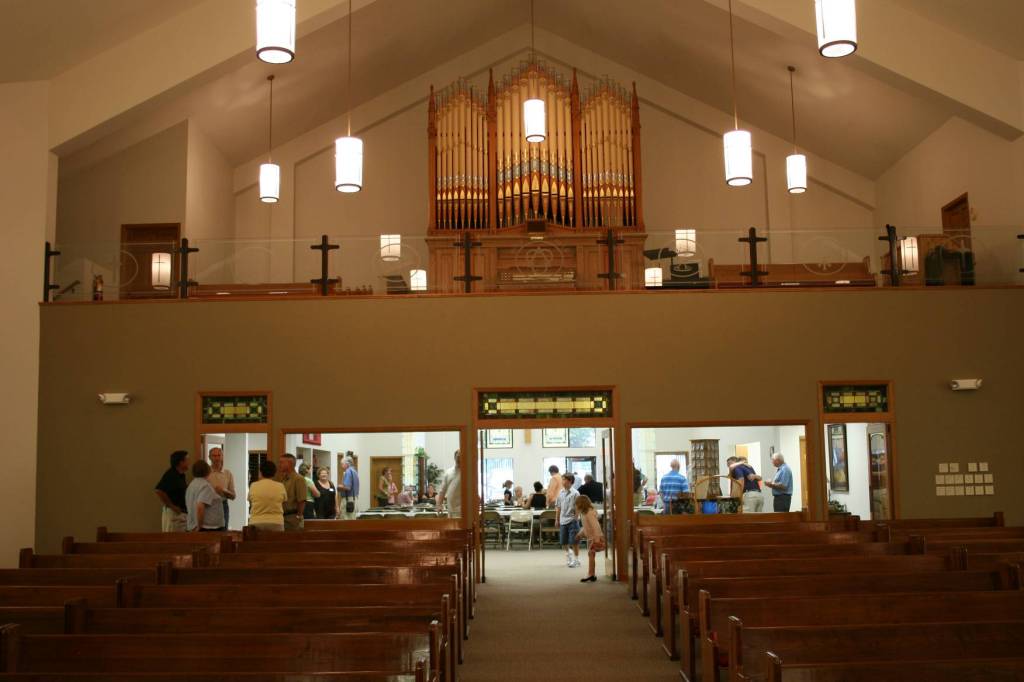 A rear photo shot of Immanuel Lutheran Church, Courtland, looking up to the balcony (where the 1895 pipe organ is located) and toward the spacious fellowship hall.

The beautiful pipes on Immanuel's organ.

JUST BECAUSE I THOUGHT it important to include, here’s some additional information about Immanuel’s organ, as shared by Immanuel’s pastor, Wayne Bernau:

When Immanuel built a new church in 2007, Rollie Rutz and crew from Rutz Organ Company in Morristown (about 10 miles from my Faribault home), helped move the organ from the old church into the balcony of the new sanctuary.

Says Pastor Bernau: “With the balcony constructed the way it is and the excellent acoustics for music in our new church, I believe the organ sounds better now, maybe twice as good, as it ever did in our 1881 building.”

I’ve heard the organ played in Immanuel and I agree. The acoustics in the new house of worship truly showcase the sounds of this 117-year-old organ played each Sunday by Lisa (Bode) Fischer, the daughter of my mom’s first cousin and a descendant of the Bode family members who helped found this rural congregation in the Minnesota River Valley more than a century ago.

A historical sign outside of Immanuel Lutheran Church, east of Courtland, Minnesota.

This photo, taken in September, shows primarily Immanuel's social hall and the adjacent cemetery where many of my Bode forefathers are buried.

A view of Immanuel's sanctuary from the balcony. The pews, the chancel furnishings and the stained glass windows from the old church were incorporated into the new church.