A Minnesota prairie native discovers a ship docked in the Wisconsin woods January 26, 2012

I GREW UP on the southwestern Minnesota prairie, a mostly flat land vertically-interrupted only by small-town grain elevators and water towers, by silos and groves of trees hugging farm sites.

I never felt hemmed in. How could I feel confined under an endless sky in a land that stretches into forever, nearly unbroken before your eyes?

Perhaps that will help you understand why I sometimes struggle with trees. I’m not talking a tree here, a tree there, but trees packed so tight that they become a forest. Dense. Black. Blocking views. I need to, have to, see the land spreading wide before me if I’m exposed for too long to miles of thick woods.

Likewise, I prefer my land flat.

All of that said, time and age and exposure to geography beyond the prairie have resolved some of those space and landscape issues for me. I can, within limits, appreciate terrain that rolls and rises, trees that clump into more than a shelter belt around a farmhouse.

I can appreciate, too, geological anomalies like Ship Rock, a natural formation jutting out of seemingly nowhere from the trees that crowd State Highway 21 in Adams County near Coloma in central Wisconsin. 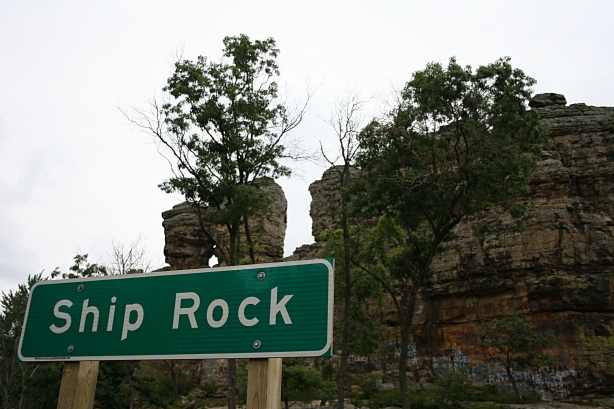 Ship Rock is located next to Wisconsin Highway 21 in the central part of the state.

Whenever I pass by Ship Rock, which has been numerous times since my second daughter moved to Appleton, Wisconsin, in December 2010, I am awestruck by this isolated pinnacle of Cambrian sandstone. Finally, this past summer, my husband, teenaged son and I stopped to climb around the base of the rock cropping and to photograph it (me mostly photographing rather than climbing).

Ship Rock rises from the flat landscape, a surprise in the Wisconsin woods.

My husband walks across the rocks below the looming Ship Rock.

If you can ignore the distracting graffiti, then you can appreciate the nuances of the mottled stone, the ferns that tuck into crevices, the surprise of this Ship Rock docked in the most unexpected of places. The rock formation truly does resemble a ship.

I am surprised by the ferns that grow in the tight spaces between rocks. 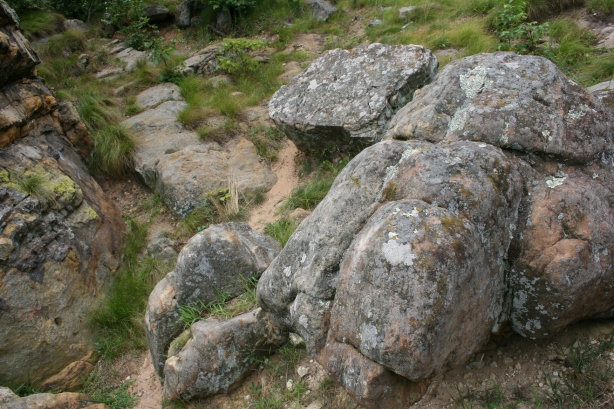 Grass sweeps between rocks in this August 2011 image taken at Ship Rock.

A month ago while traveling past Ship Rock, I snapped a photo. The ship seemed forlorn and exposed among the deciduous trees stripped of their summer greenery. Yet she also appeared threatening, a looming presence rising dark and foreboding above the land awash in snow.

I could appreciate her, even if she wasn’t a grain elevator or a water tower, a silo or a cluster of trees breaking a prairie vista. 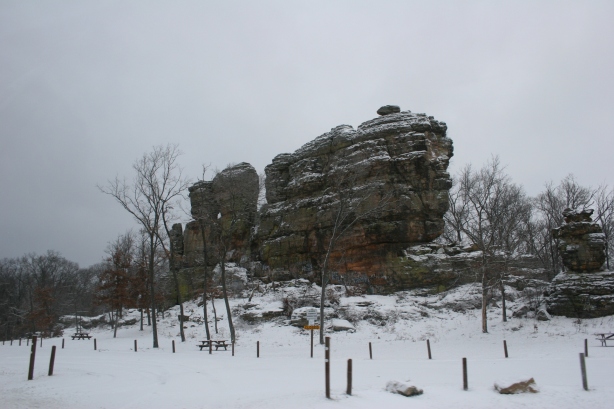 Ship Rock, photographed from the passenger window of our van at highway speeds in December.