This sculpture sits in front of the Arts Center of Saint Peter along South Minnesota Avenue/U.S. Highway 169 in St. Peter. The downtown is graced by historic buildings like these across the street from the Arts Center.

MY HUSBAND AND I are nearly through the Arts Center of Saint Peter front doors when she waves us in—she being Thalia. Not a Greek goddess, mind you, rather the Greek “muse of comedy.”

She’s not Greek either, but Mexican, this Thalia will tell you and smile as she slaps a hunk of clay, working out the air, mixing the clay just like Joel Moline across the table.

At only four feet seven inches tall, she should be manipulating clay on a table half the height, living in a world where everything is lower, shorter, Thalia Taylor surmises in a voice laced with humor.

“You should see her husband,” Joel says.

“He’s seven-two,” Thalia says and my jaw drops picturing this petite woman next to a towering man.

Then this muse of comedy laughs and corrects her mistake. “He’s six-two.”

That is my introduction to the two artists, who on this Sunday afternoon are in the Clay Center working mud-hued clay like two bakers kneading dough. When I verbalize the comparison, Joel says he’s a baker.

He also enjoys writing letters, taking on a recent challenge to write a letter daily for 30 days. He collects fountain pens. You would rightly guess that he’s penning his letters the old-fashioned way. 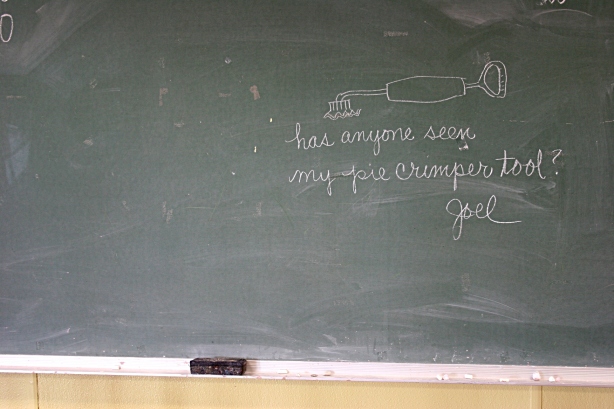 An example of Joel's graceful writing on the Clay Center blackboard. He could teach penmanship. Remember that forgotten art which some of us were taught in grade school?

I tell him I seldom hand-write a letter any more, instead typing correspondence on my computer.

Then we—my husband, the baker/potter/letter writer and the potter/muse—bemoan the inability of today’s young people to write by hand. Joel laments how youth are losing that physical connection to writing, to individual letters and words. We are in agreement on this topic, that the youth of today should be able to write and read cursive.

After we’ve discussed that topic, I slip two business cards onto the table where Thalia and Joel continue to pound clay.

As I walk away, Joel hints at sending me a letter scribed with a fountain pen. I tell him I would welcome such a gift. Then I shoot a few more photos before exiting the Clay Center, leaving the baker/potter/letter writer and the potter/muse to their musings.

Stacked pottery in the Clay Center.

CLICK HERE for information about the Clay Center at the Arts Center of Saint Peter, 315 South Minnesota Avenue, St. Peter.

As any inquisitive writer would do, I googled Joel Moline’s name just to learn more about this man who once lived in Faribault (where I live) and taught art at the Minnesota State Academy for the Deaf. Turns out Joel, a retired St. Peter art teacher, is also a print maker. If only I’d known that when we met, but we didn’t have enough time to discuss everything… Click here to read a story about Joel  published six years ago in The Faribault Daily News.