They should be building snowmen, but instead they’re selling Kool-Aid March 18, 2012

FRIENDS AND ENTEPRENEURS Quinlan and William got an early start on their summertime business, opening their Kool-Aid stand Saturday afternoon on the corner of Division Street and Prairie Avenue in Faribault.

In the first hour, the two sold eight cups of the beverage, including one to a customer who asked, “Why are you selling Kool-Aid in the middle of March?”

Quin was quick to respond. “It’s really hot outside.”

And he was right. Afternoon temperatures hovered around 80 degrees in most parts of Minnesota on St. Patrick’s Day, shattering records. The 80-degree high on March 17 marked the earliest 80-degree temperature ever recorded in the Twin Cities, according to the National Weather Service. Prior to Saturday, the earliest 80-plus degree day occurred on March 23, 1910. 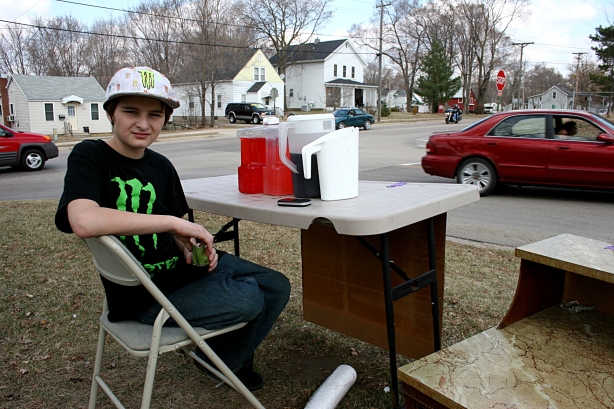 Quin waits for customers at his Kool-Aid stand at a busy Faribault intersection.

No doubt, it was an ideal summer-like day to set up a Kool-Aid stand at the intersection of two busy city streets and next door to one of the season’s first garage sales.

Quin, 12, and Will, 10, along with the sometime assistance of Quin’s 12-year-old sister, Jazmyn, (she popped in for a photo and then disappeared inside the house), shouted to passersby to stop for Kool-Aid. The boys are experienced salesman having operated their beverage business last summer, once hauling in as much as $40 on a single day.

With four pitchers of Kool-Aid lined up on a table, they offered customers lime, grape, watermelon-cherry or tropical punch for a quarter a glass. Lime is the bestseller, they noted.

Last season the pair reinvested their money in the business and then spent the rest for admittance to the local Aquatic Center, at the county fair and on video games.

Quin and Will didn’t have exact plans on how to spend this season’s profits. But some of the money had already gone toward the purchase of a Hot Wheels Dodge Neon from the next-door garage sale.

With such an early opening, the boys have a long Kool-Aid season stretching before them and plenty of time to ponder how they’ll spend all their money. 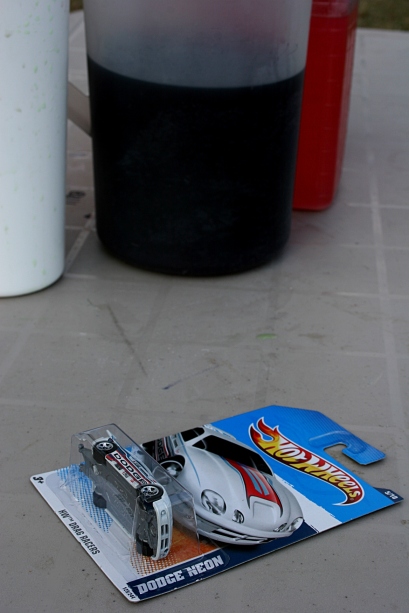 Money in. Money out. The boys purchased a Hot Wheels car from the next-door garage sale.