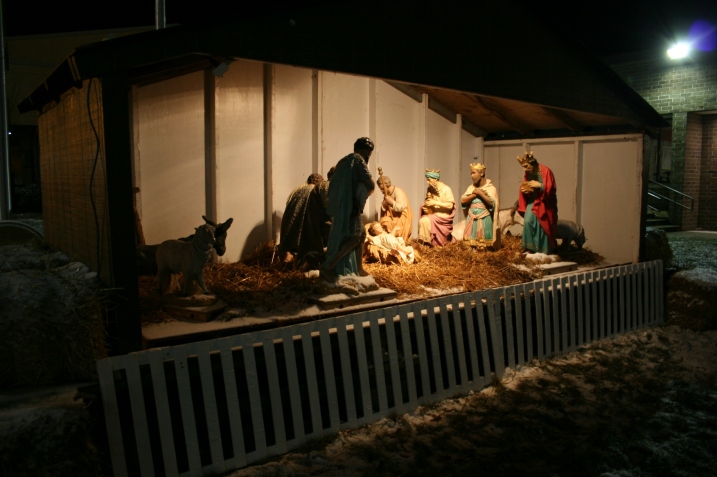 This Nativity scene has graced the lawn of Buckham Memorial Library and the Faribault Community Center for all the years I have lived in my southeastern Minnesota community, which would be 30.

FROM MY FAMILY to yours, I wish you a most blessed CHRISTmas. And, yes, I capitalize that first syllable because the Saviour centers my Christmas celebration and I hope it does yours also.

This Nativity set, donated, I believe, by the local Knights of Columbus, is a rich part of my community’s history and a work of art. If anyone knows the history of this Nativity, please submit a comment with details.

While they were there, the time came for the baby to be born, and she gave birth to her firstborn, a son. She wrapped him in cloths and placed him in a manger, because there was no room for them in the inn.

One side of the scene shows the shepherds in the stable.

And there were shepherds living out in the fields nearby, keeping watch over their flocks at night. An angel of the Lord appeared to them, and the glory of the Lord shone around them, and they were terrified. But the angel said to them, “Do not be afraid. I bring you good news of great joy that will be for all the people. Today in the town of David a Savior has been born to you: he is Christ The Lord.”

Although the wise men did not arrive at the birth of Christ,  but much later, they are typically depicted in nativity scenes. I added the “star” with an editing tool to enhance the image.

After they had heard the king, they went on their way, and the star they had seen in the east went ahead of them until it stopped over the place where the child was. When they saw the star, they were overjoyed.

Can you imagine the reverent joy the wise men felt in worshiping their Saviour?

On coming to the house, they saw the child with his mother Mary, and they bowed down and worshiped him. Then they opened their treasures and presented him with gifts of gold and of incense and of myrrh. And having been warned in a dream not to go back to Herod, they returned to their country by another route. (Click here to learn more about the wise men and when they visited the Christ Child.)